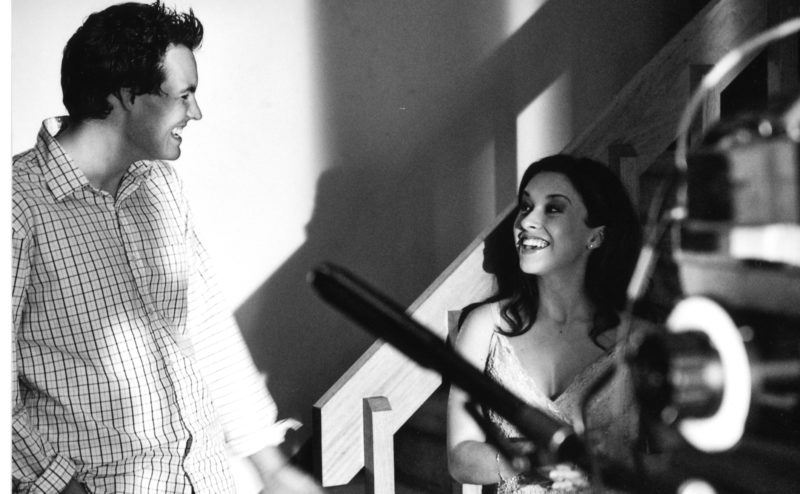 Share
A report of news & happenings in the local industry for September 2007.
Email news to news@newenglandfilm.com.

Amy Geller and Gerald Perry are breathing in Rocky Mountain air at the Telluride Film Festival (August 31-September 3).  But that’s not all.  They’re also screening a work-in-progress of their feature doc, For the Love of Movies: The Story of American Film Criticism.  Read daily updates at http://blog.geraldpeary.com.  At press time Geller wrote that feeling “ebullient” was an understatement.  Can’t wait to read the full review.

If it’s September, it’s time for Boston Film Night.  In his effort to assemble all who is the Boston and beyond film community, Kevin Anderton has planned the fourth annual evening of screenings, networking, and jocularity for September 22nd.  On tap is the first public glimpse (via trailer) of Possessions, David Kornfeld’s paranormal thriller about a terminally ill girl who claims to have been cured and possessed by a benevolent spirit.  Anderton says Kornfield hooked up with producer Arnon Shorr at Film Night last year, resulting in a 24-day shoot in Massachusetts in late 2006.  Check out www.bostonfilmnight.com.

If you can’t make it to Boston Film Night, at least help these guys duke it out in the online film competition at www.ourstage.com.  Both Shorr’s short, The Salesman (produced by Anderton) and Witness Protection Program, directed by Kornfeld were quarter-finalists as of the last week in August.  You can’t select the vids you want to judge, but if you judge enough speed rounds, their films are bound to surface.  Good luck!

Jennie Evans is organizing the first of several pay-by-class documentary workshops on September 10th.  The classes will cover topics such as developing a storyline, picking a location, gaining your subjects’ trust, asking effective questions, understanding shot composition, shooting for maximum editing flexibility and being aware of ethical considerations. The workshop will also cover the basics of how to use a camera and how to edit on Final Cut.  Dacia Kornechuk (Nikki’s Fight), who earned her MFA from the BU Film Program, serves as workshop leader.  For more information, e-mail jennieevans@earthlink.net.

Women in Film & Video/New England has posted its fall line-up, including the first of the monthly Chicks Make Flicks screenings here.  The Chicks series kicks off on September 19th with the Boston premiere of Caren Block’s and Paula Dowd’s Truth & Transformations, which examines the concept of legalized assimilation in the context of gay marriage.

The Second Annual Martha’s Vineyard International Film Festival happens September 13-16.  Designed to be a “walking festival,” all the screenings and events will take place on or near Vineyard Haven’s Main Street.  This year’s festival features work of island residents in a special segment, Think Globally, Shot Locally, organized by two filmmakers profiled by NewEnglandFilm.com this month, Liz Witham and Ken Wentworth.  Check out www.mvfilmfest.com.

Director Lorre Fritchy is in preproduction on a new feature, Millies, to be filmed in and around Lawrence in 2008.  Fritchy issued a call to artists to create paintings of “mill ghosts” for use in the film, which is about a group of mill workers who return from 1912 to convince a present-day mill owner that her future is the key to their past.  Selected entries will be on display at Gallery 181 in Lawrence from September 10th-October 11th. Visit www.MilliesMovie.com.

Upgrade! Boston is now accepting submissions of short experimental fragments, castoffs, and/or remixes; provocative, contemporary ideas; and works that challenge preconceptions and generate dialogue for monthly screenings/discussions.  Work must be no longer than eight minutes.  Learn more at www.turbulence.org/upgrade/about.html.

Looking for a new vlog?  Stephanie Mackley has joined WIMN’s Voices as its first house vlogger, and she’ll be doing vlogs (video blogs) about issues related to women and independent media production, among other things.  Reader feedback and comments are not geo-specific, so send her suggestions for topics she should vlog about, tips, etc.

In an ongoing effort to attract more film production to the state of Massachusetts, Governor Deval Patrick signed legislation in August that expands the production definition, eliminates the budget cap, and lowers the tax credit spending threshold to $50,000.  Since then, at least three major studio projects have slated time in the Bay State.  NewEnglandFilm.com editor (disclosure — me!) and frequent NewEnglandFilm.com contributor David Tames discuss the matter in an WBUR story here.

One of the perks of actually having a Massachusetts Film Office is that it does things like host a free online production guide.  So if you haven’t yet, send an email with your name and union affiliations to conasanya@mafilm.org to update the listings. Visit www.mafilm.org for more information.

Boston’s Cloud Foundation is looking for teen curators in visual art, spoken word and film.  The teen film curators review hundreds of submissions from across the country and work as a group to select and screen the highest quality films at Cloud Place.  This year the program is partnering with Mass College of Art.  Download an application.

The Independent Film Festival of Boston is accepting entries for the April 23-29, 2008 festival at www.withoutabox.com/login/4048.

You knew the Rhode Island International Film Festival (RIIFF) held last month was big — but can you fathom the following stats?  From an unprecedented 2,491 submissions, RIIFF showcased 320 cinematic works from over 70 countries and 34 US states.  It presented 125 world premieres and 36 US premieres with a total of 34 narrative features, 75 documentaries, 33 animations, 12 experimental and 161 shorts.  Now just how did they count Happy Monday?  And unlike any other New England film festival this year, it also featured one toast to NewEnglandFilm.com and its founder and publisher, Michele Meek, for hitting the big 10-year anniversary mark.  Whoo-hoo!

Congratulations to L.L. Lumpkins-O’Bryant, who won the Roxbury Film Festival’s Kay Bourne writer’s award for Emerging Local Filmmaker for her latest feature, Fishers of a Second Chance.  Lumpkins-O’Bryant was profiled in last month’s issue of NewEnglandFilm.com.

Berklee College of Music announced that Dan Carlin will be the new chair of the college’s film scoring department.  He replaces founding chair Don Wilkins, who began the department in 1979.  Carlin co-founded the Hollywood-based music post production business Segue Music.  In his 25-year tenure as its CEO, he collaborated with such artists as Tina Turner, Lauryn Hill, Tony Bennett, Barry Manilow, Danny Elfman, Hans Zimmer, and many others.  His list of awards and nominations as music director, editor, supervisor, and principal conductor is even longer.  Berklee reports that the number of students who pursue a major in film scoring has grown significantly in the past few years, and Carlin will help inspire and guide that growth going forward.

David Kleiler’s Local Sightings, the media consulting organization that helps filmmakers get their films made, sold, and seen, announced the appointment of Lindsey Shah to the position of associate director.  Shah will research venues to place films that do not have conventional theatrical distribution, and will assist Kleiler in his consulting projects.  Shah is a graduate of Mass Art and one of the founding members of www.beanywood.com.

The Newport Film Salon held auditions for its annual short film project at the end of August.  This year’s script, Saving Place, is about three grown children who must agree on the division of property following the untimely death of their mother.  For more information about the project, call Paige Kane at (401) 662-9084.

Jason Carvey of Manchester, CT released his feature comedy, A New Wave, on DVD at the end of August.  It was shot in Hartford, New Haven, Bridgeport, Cromwell, New Britain, Plainville and Southington and stars Newton, MA native John Krasinski (The Office) and Lacey Chabert (Mean Girls, Party of Five).  Check out the trailer and film details at www.anewwavemovie.com.

The Institute for International Film Financing will host a New England town hall meeting on September 6th at the Palace Production Center in Norwalk, CT.  Seven panelists will discuss the overall topic of matching investors to film projects.  Representatives from both financial and film industries are expected to attend.  Find full event details at http://events.filmfinancing.org/ne6/?id=090607.

Iranian film director Rakhshan Bani-Etemad will be present at Images Cinema in Williamstown, MA on September 12-13 with her most recent feature film, Gilaneh, and her new documentary, Maineline.  Bani-Etemad’s films are known for presenting strong female characters, often drawing controversy.  Her films are not readily available or seen in the United States.  Admission is free.

The New Hampshire Film and Television Office will host a filmmaker roundtable on September 13th from 12-2 pm at the Portsmouth Public Library.  BYOL (Bring Your Own Lunch!) and RSVP by September 10th via e-mail at film@nh.gov or by calling (603) 271-2220.

New Hampshire filmmaker Amber Ward premieres her first feature-length documentary, Common Threads: Stories of Life After Trauma, at Southern New Hampshire University on September 15th at 7 pm.  The film is about understanding the long-term effects of childhood abuse and trauma; it’s based on a book of the same name, written by Connie Roblliard and Marcel Duclos.  The filmmakers and authors will attend the premiere.  Visit www.shadowlaneproductions.com to view the trailer.

Center for Independent Documentary’s next Filmmakers Workshop will take place September 19th.  Details will be posted at http://filmmakersworkshop.blogspot.com/.

Gloucester filmmaker Henry Ferrini’s new film, Polis Is This: Charles Olson and the Persistence of Place, screens at the MFA, Boston on September 20th and 22nd.  The film explores the life and work of the modernist American poet, Charles Olson. The director and writer/collaborator Ken Riaf will be present for discussion at both screenings.  See the trailer at www.polisisthis.com/Polis/Trailer.html.

The Newburyport Documentary Film Festival (September 29-30) is plump with New England films:  Cartoneros by Ernesto Livon-Grosman, Shadow of the House, by Allie Humenuk, Boston Smile Project by Bren Bataclan, The Times Were Never So Bad:  The Life of Andre Dubus by Edward J. Delaney, and Beyond Belief by Beth Murphy.

The producers of Joppa will unveil their next project (working title The Joppa Movie) at the Ioka Theater in Exeter, NH on October 12th.  Joppa spokesperson Michael Mooney calls the new project, “a departure of sorts, an ending to Joppa if you will.  We are moving onward and upward.”

Thinking a lot these days about Demystifying Social Media Marketing Tools for Filmmakers?  Beth Kanter returns to discuss the wonders of technorati, tagging/del.icio.us, blogs and blogging, RSS, photosharing and flickr on October 18th at a workshop hosted by Filmmakers Collaborative.  Reserve here www.filmmakerscollab.org.

Or… get your hands on the web at one or two special trainings hosted by WIFV/NE, held on MIT’s campus:  September 15th will focus on social networking, blogging, RSS feeds, and uploading video. The second session, on November 17th, will provide tips on cross-promotion, including tagging, hosting video, and using aggregate communities to get your work seen.  Details at www.womeninfilmvideo.org.