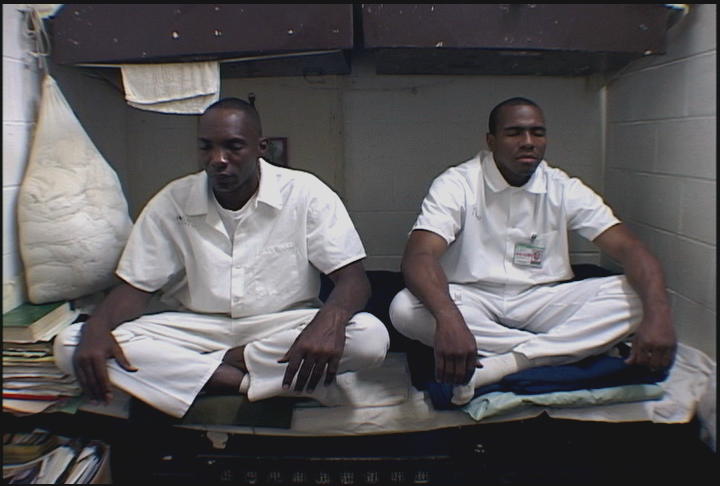 Share
Massachusetts resident Jenny Phillips speaks about her new film The Dhamma Brothers, which examines the power of meditation to incite change in even the most hopeless cases.
Men sit cross-legged on meditation mats, wrapped in navy blue blankets, with eyes closed. They seem to be sleeping but a second glance shows a latent energy that proves them to be very much awake. These meditators are not Buddhists or yogis; they are inmates at the Donaldson Correctional Facility, a maximum-security prison.

"I don’t want people to think I’m naïve in thinking that all prisoners can be transformed," said Jenny Phillips, founder of Freedom Behind Bars Productions. "But a large number of people are just so hungry for solutions."

The company’s first film, Dhamma Brothers, is a documentary following the lives of 36 prison inmates who are at the end of the line in Alabama’s correctional system and whose lives are seemingly changed after being introduced to an intensive 10-day Vipassana meditation retreat. "In prison, it’s so much about outer strength," she said. "But when you learn to meditate, you find a different kind of strength, an inner strength."

The title of the film derives from a name the prisoners call themselves — Dhamma — meaning "natural law" in Pali.

Donaldson Correctional Facility is located on the Alabama countryside near Birmingham and houses 1,500 men considered to be some of the state’s most dangerous criminals. In the fall of 1999, Phillips, a licensed psychotherapist and cultural anthropologist, was researching meditation within Massachusetts prisons when she heard about a group of men at Donaldson who gathered on a regular basis to meditate. "I’m not sure why I went down there," she said. "But I did."

After an examination of the prisoners, through observation of their meditation as well as one-on-one interviews, Phillips found their lives to be filled with apprehension and danger and, even though many of these men were serving life sentences, they were still searching for some sort of meaning in their lives. "There was such a sense of misery and hopelessness there, but also such a sense of survival of the human spirit," she said.

Phillips returned to her home in Concord, MA where she contacted the Vipassana Meditation Center in Shelburne Falls. After a year of planning between the prison and the Vipassana staff, in January 2002, Donaldson became the first prison in North America to hold a 10-day Vipassana retreat. The teachers’ stay with the prisoners was most likely the first time non-inmates have ever lived among inmates inside a prison.

Vipassana, which means "to see things as they really are" in Pali, is one of India’s most ancient techniques of meditation.  It focuses on self-transformation through self-observation. Phillips, a meditator herself, knew that meditation could offer the prisoners relief from suffering. "If you can find peaceful ways to live in prison, you’re going to be much happier there," she said.

Getting a camera inside the prison proved difficult. "Prisons like to do what they do quietly and be left alone," Phillips said.

But, after pulling some strings with Dr. Ron Cavanaugh, director of treatment at Donaldson, Phillips was able to capture the transformation of the prisoners on film. "I think it was the only medium," she said. "The written word can’t quite capture them — and I think film is the most powerful medium anyway."

For 10 days, the inmates’ lives consisted solely of meditation, interrupted only by eating and sleeping, which may not allow very much excitement for film, but the camera crew was not only permitted to film the meditation, but also the daily lives of the prisoners and staff as well as interviews with the inmates, their families and members of the community. The Dhamma Brothers also combines real-life media footage of the inmates’ crimes and includes archival television reports, which appeared at the time of the crimes.

Inmates such as Grady, a prisoner serving life without parole, discusses his crime of standing by while two men he had just met that day slaughtered a third man. He describes being frozen with fear while he witnessed the brutal attack, and then 20 years of guilt and remorse for being afraid to intervene.

The film’s website offers a reflection on the results of the meditation: "Has the retreat been genuinely transformative for the men? Or, as the Warden suggests, could they just be faking these changes to look good to the parole board? Is the transformation sustaining?"

Those questions may not have an answer just yet, but so far, the meditation is catching on. The Alabama prison is planning to have back-to-back courses in meditation in the fall and it’s even spread to other prisons in the United States. "Word is getting out in the prisons that these men have changed," Phillips said.

In addition to the documentary, Phillips compiled diary entries and letters from the prisoners over the last four years to create the book, Letters from the Dhamma Brothers: Freedom Behind Bars in an Alabama Prisons which is due out this year.

Phillips says she hopes both the book and film will challenge the idea of prisons as places of punishment rather than rehabilitation. "Just locking them up isn’t going to help," she said.