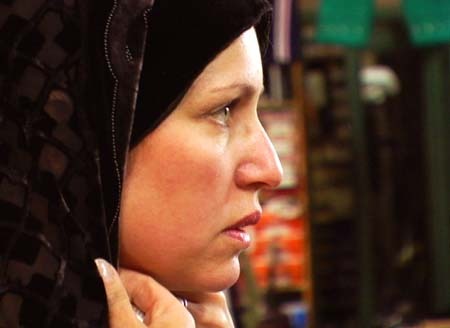 Beyond the Boundaries of Grief

Share
Two Massachusetts women share grief but also a desire to dispel the hateful atmosphere after 9/11. Beth Murphy documents their incredible journey to Afghanistan in Beyond Belief, screening at the Woods Hole Film Festival on August 4th.
Two American women, their heads covered in deference to Afghan cultural norms, ride through the streets of Kabul on their way to meet a group of Afghan women with whom they know they share one trait: widowhood.  The Americans, Patti Quigley and Susan Retik, were widowed on September 11th, 2001 and, in the years since, have founded Beyond the 11th, an organization that raises money to help widows and their children in Afghanistan.  Beth Murphy, also from Massachusetts, chronicles their journey to carry a common thread of loss across the world in her new documentary, Beyond Belief.

Before founding Principle Pictures, Murphy spent 18 years producing documentaries for television and radio.  When Murphy learned about Retik and Quigley through her work with The International Institute of Boston, her story instincts dictated that she find out more. So she phoned Retik.

"I called Susan at home and we started talking.  Her initial reaction was a little incredulity – why would anyone be interested in what we’re doing?  I had to convince them that it was interesting and inspiring.”

Retik admits that she, too, was reticent to commit to the project at first.  “I was so surprised that anyone was interested at all because we hadn’t accomplished anything yet.  It was a few weeks before our bike trip, Cycling Forward.”  Retik and Quigley, whose husbands were on the planes that crashed into the Twin Towers, planned to bike from Ground Zero in New York to Boston to raise money for their organization.  Retik remained non-committal but agreed to meet Murphy to discuss the project.  “The minute I met her I knew we were in great hands.  I just loved her from the beginning.”

“At first it seemed clear that they would travel to Afghanistan,” says Murphy.  “The structure of the documentary was obvious.  We would explore their motivations for establishing the ties to Afghanistan, we would follow their fundraising and their bike ride and then we would take the trip to Afghanistan with them.”  The women were forced to reconsider their travel plans however, when elections were held in Afghanistan and the security situation deteriorated.  Then, Retik and Quigley’s key contact in Kabul, Clementina Cantoni, was kidnapped at gunpoint.  “That sealed their fate,” says Murphy.  “They would be unable to travel.”

It was disappointing for Retik and Quigley and posed new challenges for the documentary.  “We began to think about it in different ways,” Murphy says.  “We stayed true to following the journey as it happened.”

Murphy still planned to film in Afghanistan, even without Quigley and Retik.  Fortunately, Cantoni was released unharmed after three weeks.  Many months later the situation improved enough for the two Americans to plan a one-week trip.

An Afghani widow holds the last photo of her husband.
[Click to enlarge]

One of the prime motivations for Quigley and Retik’s organization is to ease the suffering of Afghan widows who do not have the financial and social support familiar to Americans.  “There is no life insurance in Afghanistan,” Murphy explains.  “A widow must live with the husband’s family and if she wants to re-marry, she has to leave her children with them.  It’s an unconscionable choice.”

Murphy calls the shoot in Afghanistan “very intense.”  As the mothers of children who had already lost one parent, Quigley and Retik were aware of the potential dangers, and wanted to reduce risk as much as possible.  Murphy agrees completely.  “Susan and Patti’s safety was our top priority.”  Safety decreed that they could not film the women in public in Afghanistan.  Indoors, Murphy tried to balance shooting the footage she needed with respecting Retik and Quigley’s mission.  “We wanted to keep their experiences with the widows as pure as possible, so we tried to keep our distance for some of the conversations.”

Before they left for the trip, Retik says she allowed the crew to film her saying good-bye to her children.  “But then I said another good-bye privately because I felt that I needed to.”

Murphy went to Afghanistan with just cameraperson Sean Flynn for crew.  They used a Panasonic DVX 100, shooting on the 24P setting for its film-like qualities.

“They never did anything that made us uncomfortable,” Retik says about the crew.  Although the group was escorted by representatives from CARE, Retik says that Murphy handled many of the logistics for them.  “It was so helpful having Beth there.”

Murphy recalls two tense moments during the week.  “We had a car accident and there was a lot of shouting and a big crowd gathered.  As the police started to come around, there was actually less of a feeling of security, so we just focused on getting them safely into another car and away from the scene.”

In the second incident the group was traveling to a widow’s house and they had to leave the car and walk.  “A man came up on a motorcycle, which is kind of a trademark of the Taliban — they give motorcycles to new recruits,” Murphy says.  “He asked a lot of questions.  It was tense.  We were able to go to the widow’s house, but we were ushered out of the area pretty quickly.”

The first shoot of the film was at Ground Zero in Manhattan where Retik and Quigley set off for their bike trip to Boston.  “It was very moving,” Murphy says.  “They did it with the very real sense of carrying the spirits of their husbands back to Boston.”

For Murphy, when the film premiered in neighboring Tribeca at the Tribeca Film Festival last April, “There was a real sense of the project having come full circle.  I can’t think of a better place for the film to have premiered.

“It was an intense and exciting couple of weeks.  It was my first experience with a film festival and I wasn’t sure what to expect.  The audience response was excellent.  It was really powerful for me to connect with the audience.”

Both Retik and Quigley attended the premiere.  Retik calls the experience “surreal” and says she shook during the entire first screening.  “Earlier in the year we had shown a rough version of it at the Coolidge Corner Theatre as a fundraiser.  And there, I felt like I was in a room full of people I knew.  In New York, it was a room full of people I didn’t know.  Part of it was seeing myself on screen and thinking ‘Oh God, did I say that?’ or ‘I wish I’d brushed my hair.’  Silly things like that.”

At another screening, Retik remembers an announcement that there would be a Q & A session and that she was there.  “There was an audible gasp from the audience.  It was so weird because we’re so normal!”

Murphy, who self-financed the production, says she is “actively working on theatrical and DVD distribution for the film.”  Next she will bring Beyond Belief to the Woods Hole Film Festival where it will screen on Aug. 4th, with Murphy in attendance.

Retik continues to move forward in her life and confesses mixed feelings as the film is prepared for wider release.  “I have an odd feeling about it now that it’s finished.  I want success for Beth, but I’ve moved on from that period in my life — I’ve recently re-married, and I don’t necessarily want to re-visit that time.”  However, Retik freely praises the finished film.  “They did an amazing job.  They captured who we are, or a portion of who we are.  I love that people get to see the women of Afghanistan and see what we’re doing there.”

“Patti and Susan have been so supportive,” Murphy says.  They were open and candid with us and willing to expose themselves.  I recognize how hard that must have been, but they accept what it means to others to see what they’ve done.”

Retik says, “I hope if people see this movie that they take away with them the belief that individuals can make a difference.  That two, three or five people can get together and do small things that make a big difference.