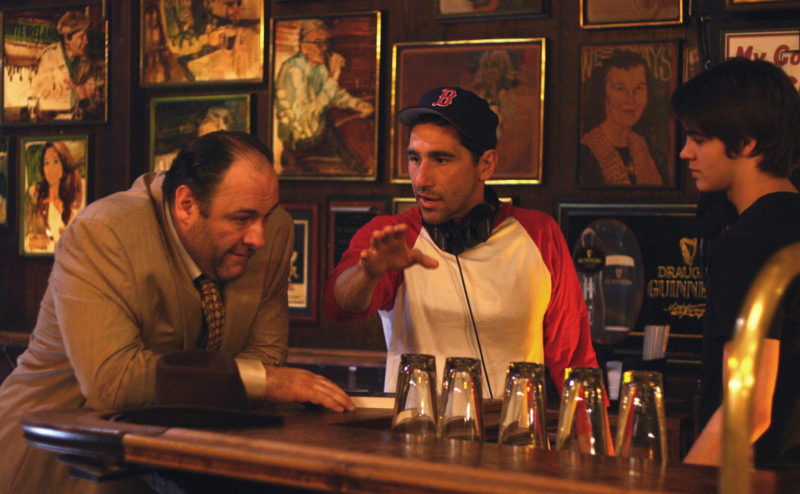 Share
In Club Soda, a young man’s dream to become a successful actor is threatened by the poor decisions he makes until a spiritual guide steps in and sets his conscience in motion. The short screens this month at the Boston International Film Festival.

Like liquor can turn a soft drink hard, so, too, can a few wrong choices twist fate. Paul Carafotes’ new short film Club Soda is a fable about his own beginnings as a fledgling actor. In the film, the main character, also an aspiring actor, breaks into the bar where he works and steals money. As luck would have it, a supernatural power intervenes and forces the youngster to make tough decisions that could make or break his future.

The film marks Carafotes’ debut behind the camera — as director, producer, and screenwriter. Best known for his roles in movies such as Fight Club, Italian Movie and more than a dozen TV programs, including C.S.I., Without a Trace, and Knots Landing, Carafotes describes Club Soda as a “coming of age story with a mystical twist.”

Years spent as an actor have lent Carafotes an intense appreciation for the filmmaking art itself. And the stars were aligned — literally and figuratively — to see him through his newfound favorite role as director.

“I think there’s something magical and beautiful about films,” he says.  “When you get a chance to work with those people and have it turn out the way it did, it is really fantastic.

Club Soda features Sopranos leading don James Gandolfini as “The Man,” a phantom-like figure who serves as the moral voice of “The Kid,” played by Steven R. McQueen, grandson of the late Steve McQueen, who makes his film debut. Other Hollywood notables in Club Soda include, Louis Gossett, Jr., Joe Mantegna, and Michael Rispoli.

Among the film’s accolades are an audience choice award and a best actor win for McQueen at the 2007 Beverly Hills Film Festival, an award for best dramatic short at the 5th annual Garden State Film Festival, and being chosen as the official selection of several film festivals across the country.

NewEnglandFilm.com had an opportunity to speak with Carafotes about his experience making the film.

Jesse Logan: How did you get the idea for the film?

Paul Carafotes: I got the idea to write it while sitting around, after I quit drinking. I started reminiscing about the beginning, when I first left Boston to go to New York.  I was working at a restaurant that had gotten robbed . . .they came through a hole in the ceiling. I was a busboy at the time and [the restaurant] offered me more money to be a sort of a night porter/security guy. I was 18 and I was willing to do anything.

JL: Throughout the film, you use the idea of a hole in the ceiling of the bar as an important plot device. Aside from being a way to break-in, it has more significant meaning.

Carafotes: The hole is very prevalent through out the short. Once The Kid breaks in through the hole, it connects the “other world” with his world — the supernatural with the ordinary.

The idea of the hole is a metaphor for the hole that’s in all of us that we’re always trying to fill with outside stuff. You know, whether we’re trying to fill it with booze, women, drugs, whatever. It’s like a spiritual malady in all of us. So I thought, Wow! I could use this idea and write something about it. So I took when I first went to New York as a kid and wrote the story around that.

JL: You’re originally from Somerville, MA. What do you remember about your venture to New York to start acting professionally?

Carafotes: It was very exciting, number one. I didn’t know what else to do because my brothers and sisters had gone to college and I had had it with school. I just couldn’t wait to get out. And that was my chance to get away from everybody and sort of be my own man. The Kid is based on my adventures.

JL: Was it tough to find work initially?

Carafotes: You have youthful exuberance and you have blind faith and you really think that you can conquer the world. You don’t go thinking you are going to fail. You go thinking, Yeah, I can do this.  I went on a weekend, when my parents didn’t know I had left home, and signed up at HB studios. Two years later, I was starring in a movie for 20th Century Fox. I was only 20 years old.  Stuff happened for me pretty quickly.

JL: What first sparked your interest in writing?

Carafotes: I got an idea to do a story about Tony Conigliaro from Boston. I had a dream about Tony C. one night.  I woke up, started making phone calls, and found out there hadn’t been a movie about his life. I got in contact with the family, I came to Boston, and I lived with them a little bit. I wrote my first screenplay and we tried to get that made. I rewrote it into something else and tried to get that made; and it didn’t happen, sadly. But this story of mine has a lot of Red Sox stuff in it. A lot of Red Sox-Yankee stuff. It takes place in the year of 1978.  It’s a little bit of a period piece.

JL: Are you still a Red Sox Fan?

Carafotes: Huge. That’s why I had you call me back. I was in the middle of watching to game. They won, so I feel very good.

JL: So now you live in LA, do you ever miss home?

Carafotes: I miss my family more than I miss home. When I’m in Boston, I love it. I love to go to Fenway and see the games. And of course, I love to be on my street and my house where I grew up. Basically, I’ve lived away for so long now that it’s different. This is my life now, here. James [Gandolfini] is always giving me a hard time because he’s not a big, big fan of being in Los Angeles. I loved it from the first moment when I got off the plane here. I thought it was fantastic. I really enjoy it. It’s a beautiful place; but don’t tell your friends.

JL: You were the director, producer, and screenwriter for Club Soda; which role did you enjoy doing the most?

Carafotes: I also wrote the music — about four songs, not the score. But I like directing. Writing is very difficult. Writing is a lonely, lonely job. But it is gratifying to hear people say your words and when the story works.

JL: You and Gandolfini starred in the 1993 film Italian Movie together. But according to an article in the Asbury Park Press (New Jersey), you’ve been friends for nearly 20 years.

JL: What inspired your conception of The Man, the intriguing character played by Gandolfini?

Carafotes: You learn a lot of lessons that take a long time in life. I took those long-term lessons and condensed it down into a character that could be a spiritual guide. In the short, he’s called The Man, who appears from a picture on the wall. It was a character that I thought was really an interesting, benevolent drunk.

He just did such a fine job. I knew he would. It was just brilliant. I mean this guy is one of the great actors of our, or any, generation. He’s just terrific, hard-working. He’s the truth.

JL: What keeps you grounded despite your fame?

Carafotes: I don’t know. I guess because of where I came from. They won’t take any shit. You know what I mean? You can’t go home and act like a fool because nobody will talk to you. It’s a pretty tough place. It’s not pushover-ville. It’s Somerville.

JL: What the next step?

Carafotes: I just finished a script. I got it out now to a few people and I’m waiting for a little bit of feedback. The few people who have read this draft are very pleased with it. So we’re excited…I would hope that we would start shooting this probably in October or November. But it depends because of all the elements. We’ve got to see if we can get everybody together. We’ve got to find someone to put up the money and all of that.

JL: What would you say is the most important message of the film that viewers should take away after watching it?

Carafotes: Don’t quit. That’s what it’s about. My whole life is about that — about trials and tribulations. You keep getting back up and keep throwing punches and don’t let anybody tell you differently, or that you can’t do anything. You can. You can do it all. And don’t take any shit off of anybody. Dreams come true. You can do anything you can put your mind to.

Club Soda screens on Saturday, June 9th at 6 pm as part of the 2007 Boston International Film Festival. For more information, visit www.bifilmfestival.com or view a trailer at www.youtube.com/profile?user=ClubSodaTheFilm.

Jesse J. Logan is a writer and journalist based in the Greater Boston area.

Club Soda screens on Saturday, June 9th at 6 pm as part of the 2007 Boston International Film Festival. For more information, visit www.bifilmfestival.com or view a trailer at www.youtube.com/profile?user=ClubSodaTheFilm. Jesse J. Logan is a writer and journalist based in the Greater Boston area.