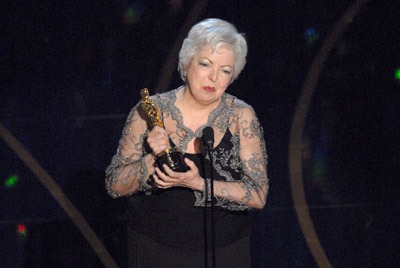 How to be a Master Editor

Share
Three-time Oscar winner, Thelma Schoonmaker, shares tricks of the trade, how to break into 'the business' and what it's really like to work with Marty.
It’s hard to imagine the good-natured, white-haired woman wrangling Martin Scorsese’s blood-soaked frames into sequence, but since the two met during a filmmaking course at NYU, they have become an inseparable filmmaking duo.

After a childhood growing up in Aruba and a political science degree from Cornell University, Thelma Schoonmaker saw herself becoming an international diplomat. But, when she expressed her liberal views during State Department tests, she was informed that she would probably find herself unhappy in a job with the FBI or CIA.

So Schoonmaker changed gears, taking an assistant film editing job she saw advertised in the New York Times. The job entailed cutting classic European films to fit the running time of U.S. television broadcasts. Though she picked up useful editing techniques, she was horrified by the editor’s methods, as he cut whole scenes from Jean Luc Godard and Federico Fellini films.

Interested to find out more about the profession, she signed up for a six-week course at NYU, where, of course, she met Scorsese and they’ve been working together ever since.

This year, Schoonmaker won her third Oscar for her work on The Departed and will begin work on Scorsese’s next film, Silence, in 2008.

After 35 years as an editor, she has learned the ins and outs of the trade. A master editor must learn more than just techniques. It takes an insight that can only be achieved by discipline, study and, sometimes, just following your gut instinct.

"Editing requires a great deal of patience and many long hours of banging away at something until you solve it," she says.

These elements have been key ingredients in Schoonmaker’s career since the very beginning. In fact, it was the reason she was paired up with Scorsese. After his previous editor butchered his film, he needed a patient and orderly editor to salvage the footage, which would eventually become his first feature film, What’s a Nice Girl Like You Doing in a Place Like This?

She says, as her career progressed she developed these skills more and more, coming up with systems and methods for organizing her footage.

"It takes a tremendous amount of hard work to wrestle all of this footage, as good as it is, into shape and get it to work properly," she says. "It takes long, long hours of work —  tremendous patience, tremendous discipline. But it’s worth it. It’s very, very much worth it."

"Never underestimate the films that were made before you," Schoonmaker says. "When Marty and I first started working together on the upper west side of New York, there were four or five wonderful theaters that ran all the art movies coming from Europe or from all around the world, Kurosawa, Truffaut, and we ran every night to the theater to see these films because they were masterpieces and we were just soaking them up."

She says, not enough filmmakers these days take the time to study the technique editors used before the days of digital editing. "One of the things I find disturbing is when a film professor announces they’re going to show a black and white, there’s a groan in the room," she says.

Sometimes you’ll see an interesting technique that’s been forgotten about or that you would never think to use otherwise. "You’re talking about 85 years of filmmaking containing endless masterpieces," Schoonmaker says.

And it’s not just the films themselves that master editors learn from. Audience reaction is critical. An editor has to know how a viewer reacts to different kinds of cuts and transitions.

"It’s very important to be in those theaters sharing the experience with other people," she says. "When we edit our movies, we always screen at least eight times because seeing it on the big screen and not on my Lightworks we get a whole different impression about how the film is playing. Is it too slow? And even if there is only one other person in the room with you, you start seeing it through their eyes. Are they restless; are they bored; why didn’t they laugh at that joke? We have to re-cut to get the laugh. Is the film too long; is it too short is it too jagged; does it need restructuring?"

"It was very important that I began [with documentaries]," she says. "When you’re working on a documentary you’re given all this raw footage and you have to find the structure, you have to make all that raw footage come together and interest people, tell a story, illuminate characters. You’re given a big puzzle and you get to fit it together."

These techniques come in handy when you start working on feature films.

"[Documentary techniques were] very important for me when I started working on improvisation in Marty’s movies because it was like documentary footage," Schoonmaker says. "For example, there’s a scene in Raging Bull where Marty could not get two cameras in the room and he always shoots improvisation with two cameras because if DeNiro goes off on some wonderful improvisation you want to have Joe Pesci reacting to it on camera. But he couldn’t get two cameras in a room in a scene where Joe Pesci is trying to convince his brother to fight somebody called Janiro and they were in the actual house where Jake LaMotta had lived and the kitchen was too small. It was a nightmare to edit, but tremendous fun. Finally I got it to work, because in a feature film when you’re dealing with improvisation, you have to make it end up looking like a written scene, it has to have the dramatic shape. So, it took me forever to try and get the wonderful stuff that Joe Pesci was doing while the camera was on him and the wonderful stuff that DeNiro was doing and get it to mesh. And, I can still see, a little bit, the seams where I knitted it together."

"Sometimes the editor has to act as a writer."

Cutting together storylines can change a script. An editor has to make sure they know the script so they can have the liberty of cutting together different scenes and deciding what stays and what goes without changing the focus of the story.

Knowing the characters is important because an editor can use techniques such as inter-cutting to add depth and layers to a character. For example, in The Departed, Schoonmaker adds flashbacks of violent past experiences to parallel a therapy session with Leonardo DiCaprio’s character. This helps the audience understand and further sympathize with his character simply through an editing technique.

"And you can portray the feelings of characters through edits," she says.

A scene in Goodfellas, where Ray Liotta’s character takes cocaine and drives to pick up his brother, is edited in a hectic, scattered way in order show the paranoia his character is experiencing.

"It’s an editor’s job to create tension, drama, shock, emotion and surprise," she says. "It’s like putting together a jigsaw puzzle."

"Collaboration is a big part of editing."

Find a director you get along with. Schoonmaker says she and Scorsese are such a good match because they balance each other’s personalities.

"I’m not as moody as he is and he’s moody because he’s a great artist and things impinge on him much more than they do on most of us.  That’s why he’s so good, because he feels things so deeply," she says. "So it’s good for me to just be a steadier sort of thing he can rely on.  I’m much more level so that works very well together…It’s a very good marriage of personalities."

Though there are directors who don’t go into the editing room at all and leave most of the decisions up to the editor, Scorsese is not one of those directors. "Editing is his favorite part of filmmaking.  For him editing is key to the filmmaking process. We work very happily together. I feel I am his collaborator and I’m helping him get his vision up on the screen," she says. "It’s a very collaborative process all day long with us going back and forth talking to each other about what to do."

Directors are becoming more and more involved in the editing process because, with digital filmmaking, more footage is being shot and each scene has multiple takes.

During collaboration, both the director and the editor must make compromises. You might not always get your way on what stays and what goes. "It’s very painful sometimes, dropping things. In every film we have to drop something we absolutely love to get the film to work," she says. "Sometimes an editor has to do that. It’s like cutting off your leg. Sometimes my favorite scene is dropped because we have to get it down."

"An editor’s job is to be invisible."

"The way an editor makes a scene play smoothly and give it the right pace and length is invisible. You’re not supposed to tell how the editor did that," she says. "To really see how an editor works, you have to be in the room with me for two months and watch what my first cut was like and two weeks later, what my second cut was like.  Then you would see what I do, but it would be very boring for you."

Though there are times when you want to shock your audience by using flashy editing. Schoonmaker says that is what usually earns Oscars. "Marty and I like to slap the audience in the face sometimes when it’s required," she says. "You can have all the tricks in the world, but how you use them is key."

With digital editing, she fears MTV-style editing will be taking over, where quick cuts and showy techniques are used to grab audience attention, rather than the quality of the shots.

"Don’t underestimate the power of the shot," she says. "When you have a good director, sometimes shots don’t need to be edited and the camera can just linger."

Then again, the good thing about digital editing is that it allows for experimentation. Schoonmaker says she can now copy a sequence of edits like a Xerox. Now she can make three or more versions of a scene to show Scorsese.

But most of all.

Thelma Schoonmaker is the 2007 recipient of The Coolidge Award. She was honored in April with a ceremony and retrospective, and she led a master class in editing. For more information about the award, visit www.coolidge.org/award. To view Schoonmaker’s Oscar thank you speech, visit www.academyawards.com/oscarnight/winners/?pn=detail&nominee=TheDepartedF….

Nikki Chase is a freelance writer in Boston. She can be contacted at nikki_chase@emerson.edu.

Related Image: The master at work.

Thelma Schoonmaker is the 2007 recipient of The Coolidge Award. She was honored in April with a ceremony and retrospective, and she led a master class in editing. For more information about the award, visit www.coolidge.org/award. To view Schoonmaker's Oscar thank you speech, visit www.academyawards.com/oscarnight/winners/?pn=detail&nominee=TheDepartedF.... Nikki Chase is a freelance writer in Boston. She can be contacted at nikki_chase@emerson.edu.