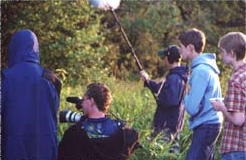 Have Camera, Will Camp: Summer Film Opportunities for Youth

Share
Searching for the perfect camp for your kids? Why not consider a program that increases their technical skills and opens their eyes to a new form of storytelling? This summer, New England hosts a wide array of film and video learning opportunities for kids of all ages.

In the past, Kingdom County Productions in Barnet, VT has hosted Fledgling Films camps for teens, but this summer they are undertaking a full-fledged, teen-driven, feature film production.  The Voices Project Movie is based on a musical written by Vermont teenagers. The stories and characters were developed during an intensive, yearlong statewide research phase in which more than 1,000 teens participated.  The project shoots on location in VT in July and August.  Teen interns are needed, but they need to contact the office by the first week of May.

The Institute of Contemporary Art (ICA), Boston has a strong tradition in acquainting youth to the video arts through its Fast Forward program.  Spring and summer highlights include a screening of videos created by teens on May 25th, a four-day Flash intensive class for students entering eighth or ninth grades starting July 10th, and both one-day (date TBD) and two-week explorations of digital art on the Boston Harbor Islands.  The two-week camp takes place Monday through Friday, August 6-17 from 10 am-5 pm; high school-age students shoot and edit their own footage captured on the islands.

The Rhode Island International Film Festival (RIIF) presents the KidsEye Summer Filmmaking Camp at the University of Rhode Island in Kingston, RI from July 9-13.  KidsEye participants, ranging from 10-16 years old, try screenwriting, storyboarding, acting, directing, and crew work.  They also learn editing, if time allows.  Instructors emphasize gaining hands-on experience and working together as a team.  Students take home a copy of the films and passes to some RIIF events, including the KidsEye International Film Festival, where the film they make will screen.

For a broad-based sampling of communications, high school students enrolled in the Maine Media Camp (July 22-27) get a taste of radio, television, audio, and digital media production.  The residential camp, held at the New England School of Communications in Bangor, ME, includes guest speakers from media professions and tours of radio and television stations.

Filmmakers Ink offers year-round programs for youth video and filmmakers.  The Summer Film Academy schedule includes one week of screenwriting, one week of editing, or two weeks of filmmaking, acting, or special effects.   The day camps are located throughout Connecticut and Western Massachusetts; some workshops have prerequisites.  Opportunities are available for kids ages 8-16.

The School of Cinema & Performing Arts (SOCAPA) hosts a wide variety of summer camp opportunities in multiple locations, including at Smith College in Northampton, MA.  Young people ages 11-18 can choose sessions lasting from two to six weeks.  Programs specialize in filmmaking, advanced filmmaking, or acting for film.  Application and deposit required.  SOCAPA has a rolling admissions policy and generally looks for students with at least a B average.

Another collegiate summer camp experience takes place at Harvard University, which hosts youth sessions for the New York Film Academy.  (Students can also choose from array of locations abroad.)  Over three to six weeks, students focus on film and digital technology in-depth, brush up on acting or 3D animation, or spend a week each on film, acting, and music video.  Applications are accepted online.  Financial aid is available.