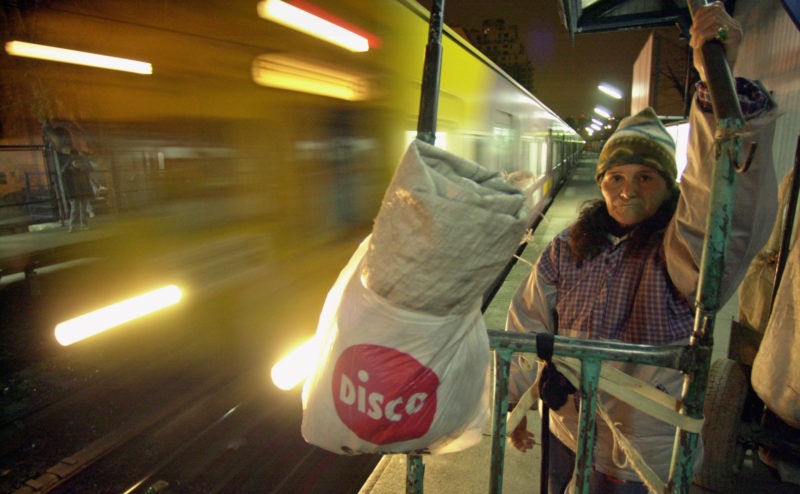 Trash to Treasure: A Story of Economic Survival

Share
What do you do with your garbage?  Boston College professor Ernesto Livon-Grosman explores how recycling in his native Buenos Aires has brought economic vitality to the lives of displaced workers in his documentary film, Cartoneros.

Cartoneros, Boston College professor Ernesto Livon-Grosman’s first documentary film, opens with a quote by French poet, Charles Baudelaire, setting the stage for a fascinating exploration of the complex sociological, ecological, and economic system of trash recycling in his native Buenos Aires:
Here we have a man who has to gather
the day’s refuse in the capital city.
Everything that the big city threw away,
everything it lost,
everything it despised,
everything it crushed underfoot,
he catalogs and collects.

In 2001 Argentina suffered a severe economic crisis, closing thousands of factories and leaving millions jobless.  Livon-Grosman, who has lived in the United States for over 20 years, was appalled when he visited Buenos Aires and witnessed the hardship the economic downturn had imposed upon his fellow countrymen.  Yet, even more stunning were the resourceful and creative measures taken by many who felt the harsh impact of the economic changes.

Every night thousands of cartoneros, loosely translated as “scavengers,” come into Buenos Aires from the outskirts to collect items of trash that have been discarded by businesses and households.  Men, women, and children, many who are well-educated displaced industrial workers, push two-wheeled carts outfitted with large canvas bags.  They rummage through trash bins for cardboard, paper, metal, plastic, glass and other matter with a resale value in the recycling market.

Livon-Grosman was simultaneously revolted and intrigued by the sight of people packed together with mountains of trash in the “Tren Blanco,” a passenger train refitted to accommodate the cartloads of trash the cartoneros transport from the city at the end of each night.  That image collided with his long-time desire to make a documentary.  He knew in that moment this was his film.

Determined to do more than tell a sentimental story of the cartoneros’ misfortunes, Livon-Grosman reconstructs the journey of rubbish, from curbside trash receptacle to consumer product.  He introduces a network of unconventional entrepreneurs at each level of the recycling process, exposing the resulting micro-society with its own set of codes and hierarchy.  “Instead of showing death and misery and suffering, which was a common topic in the news at the time,” he said, “I wanted to show how people were able to pool resources and out of their own creativity, establish a new sort of an income based on this informal recycling.”

Though Livon-Grosman had studied documentary films over a long period of time, this was his first venture into making one on his own.  Besides tackling the challenges of being a first-time filmmaker, he had to overcome the hurdle of being more than 5,000 miles away from his subject.  “It was a little more laborious to do the preproduction and to prepare things from here,” he said.  “But once I got the idea how to do it, when I got people [in Buenos Aires] who were helping me, it was not that complicated.  I could read the papers here; they would collect information for me.  There was a network of friends and acquaintances who would say this is going on, that is going on.”

During the preproduction phase in 2003 he gathered pieces of information and synthesized them, working out how they would fit into the framework of the film.  Another problem he confronted was finding dependable sources for data.  Many Argentines have a distrust of the city government and are reluctant to participate in a census, therefore rendering statistical information unreliable.  No information from the newspapers could be taken at face value, and had to be tested for accuracy.

After a year of preproduction Livon-Grosman left for Buenos Aires to begin filming. He was accompanied by Joe Mastantuono (Salvage, Al Otro Lado, Kettle of Fish), who was familiar with the Panasonic DVX100, a camera that was new at the time.  Livon-Grosman chose it because of its ability to shoot at 24p, creating a more film-like quality. “I was in love with the camera.  I wanted to use it at all costs,” he said.

When Livon-Grosman first began filming in Buenos Aires he approached people at train stations where he had seen cartoneros on other occasions.  Through many conversations with the cartoneros he found a tightly woven network in which everybody knew everybody else. He soon discovered that a segment of the estimated 25,000 to 30,000 cartoneros operated within structures of varying degrees of organization.  People brought their experience and skill sets from previously held industrial jobs, creating hierarchies and divisions of labor. Co-ops and sophisticated systems of moving the reclaimed trash along its recycle journey were well established.

Two events happened by chance that determined the design of the film.  The first involves a cartonera named La Colo, whose story is compelling.  Well-educated, holding a master’s degree in literature and philosophy, La Colo owned a successful freight company.  After the economic collapse, she found herself unemployed and without any means to support her children.  One of Livon-Grosman’s contacts in Buenos Aires had seen La Colo on a television news interview and encouraged him to speak with her.

“I had no way of knowing how I was going to find her,” he said. “I was in Massachusetts.  I asked my assistant in Buenos Aires to find out the producer for the channel and we contacted him.  He was extremely helpful.  He facilitated my gaining access to the train in which all the cartoneros traveled.  He introduced me to La Colo and from then on I followed her as much as I could.”

La Colo is the film’s primary spokesperson for those cartoneros who work independently, with little support.  Articulate and intelligent, she offers insights into the daily lives, hearts and minds of the cartoneros.  “You have to do this with a sense of dignity,” she says.  “There is no other way.”

The second serendipitous event occurred after Livon-Grosman had begun filming. The city officials were under political pressure to regulate the activities of the cartoneros.  The result was the organization of weekly meetings between the cartoneros and government officials. Livon-Grosman was able to bring the camera into the meetings and meet some of the anthropologists who were there on the city’s behalf.  “I would go there every week,” he said.  “They were very laborious and long meetings, and (I’d) spend hours there, just listening to the exchanges between cartoneros and the government officials. Once I met the anthropologists who worked as consultants for the government the whole thing opened up.”

Livon-Grosman repeated the trip from Boston to Buenos Aires twice more over the course of two years, his crew consisting only of an Argentine camera and lights husband-wife team.  Between trips he edited the footage and assessed the development of the characters and their stories.   After two years he had 60 hours of footage to make his one-hour film.

Cartoneros had its New England premiere in October at the Boston Latino International Film Festival.  It has been well received at film festivals and universities in the US and abroad.  The test for Livon-Grosman will be its debut in Argentina next month.  He anticipates political references in the film will trigger an audience response not experienced elsewhere.  Livon-Grosman has recently signed a distribution deal with Documentary Educational Resources.

Livon-Grosman hopes Cartoneros will convey to an audience the complexity of Argentine society and what its people have been capable of accomplishing in a crisis.  He also hopes to provoke a greater awareness among Americans to the cartoneros in our midst.  “I would hope that people will be able to make a connection between what’s going on there and the fact that we also have cartoneros here, in the Boston area, that the next time they come across one they will see him.  Here, as well as there, they tend to become invisible.”

Cartoneros will be screened as part of the mini-festival of the Providence Latin America Film Festival (PLAFF) on Saturday, April 28th at 6 pm in the auditorium of the Rhode Island School of Design. More information about the film can be found at www.cartonerosdoc.com. Visit PLAFF at www.plaff.org.

Nancy L. Babine is a writer and filmmaker. She can be contacted at NLBab@comcast.net.

Cartoneros will be screened as part of the mini-festival of the Providence Latin America Film Festival (PLAFF) on Saturday, April 28th at 6 pm in the auditorium of the Rhode Island School of Design. More information about the film can be found at www.cartonerosdoc.com. Visit PLAFF at www.plaff.org. Nancy L. Babine is a writer and filmmaker. She can be contacted at NLBab@comcast.net.