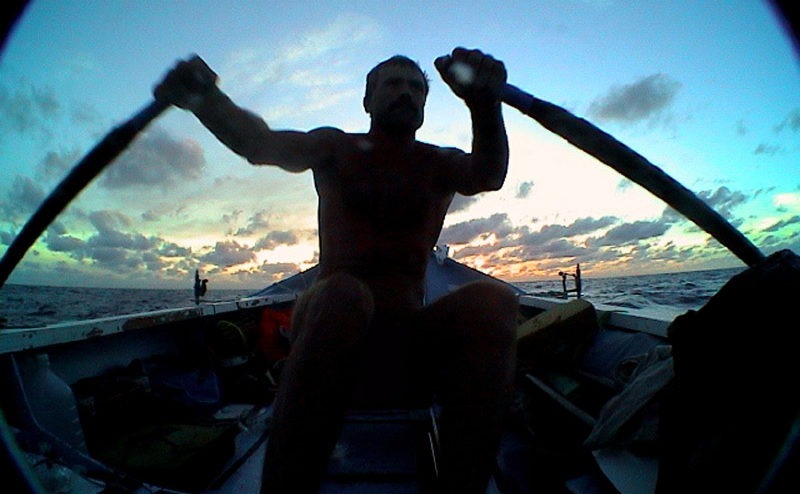 The “World’s Toughest Race” by Rowboat

Share
New England native Thomas Mailhot rows the Atlantic and becomes a documentary star in Row Hard No Excuses, screening this month at the Independent Film Festival of Boston.

Although Thomas Mailhot and John Zeigler shared a mutual interest in rowing, they didn’t plan on making a documentary about their 3,000-mile journey across the Atlantic. But when Mailhot spoke of his plans to a producer friend, whose son had an interest in filming, the story began to unfold as a documentary.

In 2001, 36 teams of competitors from New Zealand, Australia, South Africa, China, and eight European countries entered the race with no contending prize money. Row Hard No Excuses chronicles the voyage of the only American entry in the Atlantic Rowing Challenge.  And at 51 and 41, Zeigler and Mailhot were among the oldest competitors to participate.

As the American team soon found out, the rowers were faced with sleep deprivation, seasickness, isolation, boredom and cramped living conditions. The film focuses on the friendship between these two men and captivates both the excitement and danger of being at sea.  NewEnglandFilm.com caught up with Mailhot to discuss the film, why he felt the need to share his story, and what it was like to star in a documentary.

Kellie Speed: Tell me about how this documentary came about.

Tom Mailhot: John Zeigler and I were documenting the various stages of boat building and training when Bill Wolbach, who is the producer of the film, got interested in what we were doing. His son, Luke, had done a lot of editing and producing so he asked him to come from San Francisco to look at the project. He ended up buying a bunch of high-end cameras and started the documentary. He followed us to the Canary Islands where we filmed other teams and got their onboard footage. At that point, we then realized we were doing a documentary. It wasn’t planned though. We planned to just have the camera rolling as we did the trip.

KS: You rowed 3,000 miles across the Atlantic Ocean. What did you learn from that experience?

Mailhot: I realized I am not as young as I used to be (laughs). I think we learned a lot about ourselves. I think you wonder if you are capable of doing something like rowing the ocean but you’re always unsure if you actually can.

KS: How did you become involved with Lantern Films?

Mailhot: Bill Wolbach is a friend of mine who lives in Essex, Massachusetts. We had been on a marathon canoe team, and he became interested in the project.

KS: What is it like to star in a documentary?

Mailhot: It’s not how I live my life, to be in the limelight. With a documentary, you have to let everyone know everything. It took a lot of money to make this happen. We had to gather a lot of publicity and money for sponsorship. I generally like to go do things and come back and tell people about it. To actually make the documentary was a big thing for me — to star in a film, sign a waiver and not know how the movie will actually end up, what parts will be cut, etc. We bared our souls and showed how we got on in the boat. There are some scenes that are difficult to watch or even listen to.

KS: Why did you feel it was important to share this story?

Mailhot: It’s a really good story and I hope some people find some inspiration in our sharing the story. It’s interesting to those people who may dream of doing something like this and also for those who would never dare to attempt it. People live vicariously but this is more than just two guys rowing across the ocean. It’s a culmination of hundreds of volunteers. The documentary brought so many people together, formed new friendships and changed the path of my life.

KS: How long did the trip take?

Mailhot: It took 58 days to complete. There have been more Americans who have walked on the moon than rowed the ocean. It was an overwhelming challenge. People don’t think of doing something like this. To be on the water is not natural. If you are climbing Mount Everest, you can look at the winds and weather and make some predictions. Being on the Atlantic for two months brings every type of weather imaginable. We were on the outskirts of Hurricane Olga that produced significant storms. I say the outskirts because we rowed for miles to avoid the eye of the hurricane. We encountered electrical storms as well. The first week was the most difficult to get used to life at sea. We didn’t get seasick but got very close. We had to get into a rhythm. Some people think when you return you come home in better shape but it’s actually depleting to your organs and joints. We also suffered dehydration because we couldn’t produce enough water.

KS: What was the most rewarding thing you gained from this experience?

Mailhot: There was a race in 1997 for the first time and then another one four years later in 2001, which we participated in. Ocean rowing had only been around since then. Before the race was conceived of, one in three ocean rowers disappeared — lost at sea or drowned. The stats were not good. There have been many highlights in my life such as winning the cup at a hockey tournament but the most spectacular time of my life was rounding the last part in Barbados with all our friends and family around to cheer us on. I have also remained friends with John over the years because we have this great achievement together.

KS: How did you initially become interested in rowing?

Mailhot: I have been a hockey player all of my life. I moved to the Boston area to go to school and realized that I needed to do something other than hockey so I bought a kayak in Essex. Two weeks later, I entered a race and won. I thought maybe I knew what I was doing then. When I started, I was more of a kayaker. When I entered this race, I concentrated on rowing for three years. We built the boat ourselves. It was a tremendous commitment from both me and John time-wise, monetary-wise and obviously, it affects the relationships all around you.

KS: What are some of the challenges you encountered?

Mailhot: Monetary was one of the biggest challenges. It was tough to raise money to make this happen. We had to buy the boat and all the supplies and equipment that we needed. We ended up spending about $150,000-200,000 on the project. We had to raise all of the money and then contribute from our own pockets. When I returned, I had to sell some land to get out of debt. When you are committed to a project, you have to be a person of your word and follow through despite the consequences. While we were at sea, we became dehydrated. It was extremely hot there (over 100 degrees in the shade) since we were near the equator. It was difficult to move at some points let along have to pull on oars. At times, there wasn’t even a breath of air. We rowed 12 hours a day together and then we rowed in three-hour shifts so we kept the boat moving all of the time. It was difficult to row the boat alone because it weighed 3,000 pounds. One person also had to be on deck to keep a look out for other ships.

KS: Since there was no prize money involved, some people might think you were crazy for doing this. What do you have to say to them?

Mailhot: The fact that there was no prize money appealed to me. It was just good old fashioned competition among nations, not professional athletes wanting prize money. That’s what made it a fabulous competition and I am glad we were able to share our story.

Row Hard No Excuses will be screening at the Independent Film Festival of Boston. For more information about the documentary, visit www.lanternfilms.com/index.html. For a complete schedule of the IFF, visit www.iffboston.org.

Row Hard No Excuses will be screening at the Independent Film Festival of Boston. For more information about the documentary, visit www.lanternfilms.com/index.html. For a complete schedule of the IFF, visit www.iffboston.org.