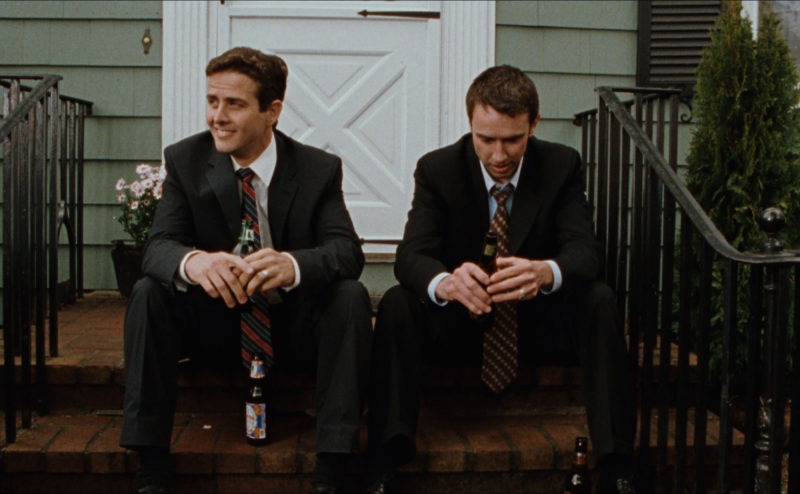 The Boston Connection: On Broadway

Share
In 1997, Boston native Dave McLaughlin wrote and produced a play in a local pub.  A few years later, he drew upon that experience to write and direct On Broadway, a family drama set in Boston. On Broadway will have its world premiere on April 26th at the Independent Film Festival of Boston.

With a collaborative art such as filmmaking, the willingness to make connections and use them could mean the difference between a film living on the screen or living in the can.  Maybe it stems from being the youngest of 11 children or from his years writing and producing plays on a shoestring budget, or maybe it’s a bit of both, but Dave McLaughlin definitely has a knack for connections and collaboration.  McLaughlin used both, plus doses of talent and dedication, to write and direct his feature film, On Broadway.

The story of On Broadway starts not in Boston, but in Los Angeles.  McLaughlin was living there and making the rounds with a script.  “I had a million meetings and everyone was gushing about it, but no one wanted to make it,” he says.  His frustrations at being in “the studio loop” made him consider alternative projects.

“The script needed 10 or 20 million to produce.  I wanted something that I could produce for less money.”  He began to think back on his experience producing the play at The Burren in Somerville.  “It was such a pure thing.  Nobody was getting paid; there was an incredible engagement with the audience.  I thought about adapting that experience, so I wrote a fictionalized account.”  McLaughlin wrote the first draft of On Broadway in 1999, and then revised it 15 times.  “It became more overtly fictionalized as each draft went on.”

In the film, McLaughlin’s playwright is a carpenter named Jack O’Toole.  Jack writes a play to honor his late uncle and stages it in the neighborhood pub.  According to the author’s synopsis, Jack “uses this story of heart and humor to move family and friends beyond their sense of loss.”  The director likens his film to Billy Elliot or The Commitments.

In 2001, McLaughlin took his script for On Broadway to New York and Boston to raise money from “high net-worth individuals” to produce the film.  “It was a terrible time to fundraise,” he says.  “The NASDAQ crashed and then 9-11 happened.”  Although he felt that he had a strong script he “put it on the shelf,” moved back to Boston and turned his attention to other projects.

A few years later the script came off the shelf after a phone call from McLaughlin’s friend Lance Greene, an actor and producer.  “He asked what was happening with the script.  He said he knew some people in New York who were right to finance it.  That didn’t work out, but it enabled me to put the other pieces together.  I attached actors and found the key positions for the crew, so when I went back [to fundraising], I had more to offer.”

One crew member he didn’t need to hire was a director.  “From the start I knew I wanted to direct it,” he says.  “What I feel confident about as a director is the story and understanding the characters.  I’m very comfortable working with actors.  This script is not technically complex; there are no helicopter crashes, so it suits my strengths.  The areas I’m not confident about, I got people who were.  It was a collaborative experience.”

McLaughlin hired a casting director in New York and recruited his friend Kris Meyer, who is a producer for the Farelly brothers, to help.  The shoot itself was an “efficient” 20 days.  “We had a tight budget and a tight shooting schedule but right off the bat it was all very orderly and the spirit on the set was great.”

Joey McIntyre, who grew up in Boston and began his career as a member of the singing group New Kids on the Block, agrees that the atmosphere on the set was productive and cooperative.  “Dave is really great,” the actor says.  “He has a subtle touch.  He knew how to be there when you needed him and how to step back and just let you work.  It was a really nice balance.”  Although the cast and crew included some impressive professional resumes, McIntyre says there were no egos on display.  “Boston has that attitude: ‘Who do you think you are?’ So anybody from Boston, when they come back…ya gotta keep it real.  There was no baloney on the set.”

McLaughlin contacted McIntyre directly about playing the role of Jack O’Toole.  The two men have a lot in common.  They went to the same high school, although they did not know each other, they have similar backgrounds as members of large Irish Catholic families, and “We have a million mutual friends” McLaughlin says.  “We hit it off right away.  Joe really related to the story.  He said to me, ‘That’s my Boston.’  He understood what I was trying to do.”

McIntyre agrees. “Dave and I saw eye to eye on the tone of the character and who this kid was and how he dealt with things.  I got where the character was coming from.  I think Jack is trying to do the right thing.  He’s trying to help his family and be a good husband.  He wants to address the issues facing him, but it takes a lot of courage to say to someone in your family, ‘Let’s talk about this’ especially in the Irish Catholic upbringing.”

Although the Irish American experience is closely linked to Boston, McIntyre says that what is depicted in the media is often a stereotype.  “Irish Catholic Boston is usually somebody with a pint, an Irish sweater and big attitude.  But there’s a subtler approach and that’s what we were trying to capture.”

McLaughlin rounded out the cast with native Bostonians he discovered in a local talent search.  They contribute to the authentic Boston flavor of the film so “it’s not a veneer” the director says. “There’s a mix of iconic Boston stuff with stuff that no one’s ever seen.  I’m really happy with how the aesthetic came out.”

In addition to McIntyre, other cast members who have local roots include Eliza Dushku, Mike O’Malley and Lance Greene.   Comic actor Will Arnett is not a Bostonian but is a friend of McLaughlin’s and appeared in an earlier film he wrote called Southie (1998).  Amy Poehler, a cast member on Saturday Night Live and a Burlington native, is married to Arnett.

McLaughlin says that improvisation is not usually part of his working process, but Arnett and Poehler are so talented and funny that he didn’t write full characters for them.  “I told Will, ‘I’m just leaving this character really lean.  Here’s the scene and I think the joke is something like this’ and then Will is so funny he just took off with it.”  McLaughlin hastens to add, “The movie is not a comedy.  It’s a drama with a healthy dose of comedy in it.”

McLaughlin praises the city of Boston and the Mayor’s office for their cooperation and help during production.  He also says that local businesses were generous to the project, particularly The Skellig pub in Waltham, MA, a key location for the film.  “You don’t make a movie like this without a million favors,” says McLaughlin.

Boston College (BC) is also well represented in the cast and crew.  McLaughlin is an alumnus, as are producer Kris Meyer, assistant director Greg Smith and actor Amy Poehler.  When the film was ready for postproduction, BC offered McLaughlin the use of an Avid Adrenaline in exchange for giving students hands-on experience in the filmmaking process.

With his film about to make the leap from the can onto the screen, McLaughlin is excited and hopeful.  “I can’t wait to put it before an audience,” he says.   It seems only fitting that this film that was born and bred in Boston, written and directed by a born and bred Bostonian, should have its world premiere at the Independent Film Festival of Boston.  The director will be present on April 26th at the Somerville Theatre with Joey McIntyre, Eliza Dushku, and an audience full of local fans, friends and family.

Dushku sums up the collective spirit that went into the making of On Broadway: “I can’t wait to see the final product with all of the fierce and loyal people we had involved in this film.  On Broadway is a real hometown project to me.”

For more information about the premiere of On Broadway and other festival films, visit www.iffboston.org.

Ellen Mills is a film fan and writer. Contact her at Emills941@yahoo.com.

For more information about the premiere of On Broadway and other festival films, visit www.iffboston.org. Ellen Mills is a film fan and writer. Contact her at Emills941@yahoo.com.