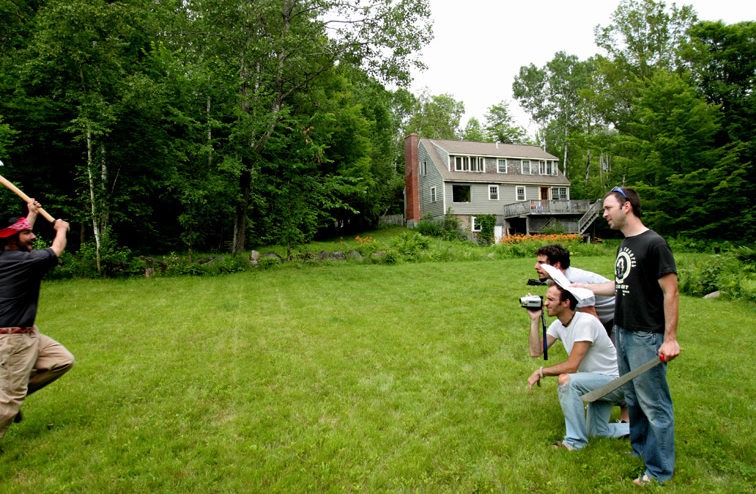 Share
This month homegrown web comedy Joppa returns from hiatus (and a spin-off) with the launch of season four and an ever-growing fan base.

Now that YouTube is a household word, any recording device can be a potential vehicle for mezzo-stardom. Maybe that’s how four guys wearing ties could prowl the streets of Newburyport unnoticed, shooting scenes for their comedy show Joppa with a consumer camcorder and $20 mic. But that was 20,000 or so fewer viewers ago.

Now with a unique viewership that exceeds 50,000, the entirely independent and self-distributed online program Joppa has relocated and regrouped. Joppa’s first three seasons, shot between summer 2005 and 2006 in and around Newburyport, went on hiatus after the untimely "death" of one of the four main characters. To find the killer, the remaining Joppans followed their noses into a spin-off called Who Shot Ben Therrien? (WSBT). WSBT wrapped last fall and Joppa’s season four — shot in their new home of Portsmouth, NH — is due this month.

Joppa is a short-format serial comedy about four post-college buddies who grapple nonsensically about the meaning of words, the whereabouts of a red ball, and the destruction of a park bench, among other inscrutable topics. Seasons include about 10 episodes. Episodes run about eight minutes and are broadcast at 12:01 am Monday mornings on a website designed by the show’s creators. Viewing is free to all with Internet access and audiences from all over the US turn up regularly and then chat about the episodes online.

Though led by writer/director Thom Neff, the show is a collaborative effort between Neff, Mike Mooney, and Ben Watts. All in their late 20’s, they met while attending Colby-Sawyer College in New Hampshire. Other fellow alums and new virtual friends contribute to the show but Neff, Mooney and Watts are the primary writers, producers, promoters and talent. They play a version of themselves in Joppa with Neff as serious and sardonic, Mooney as outlandish and dim, and Watts as curious and flip.

Each episode has a loose structure, which changes from season to season. In season one, for example, episodes open at the same park bench and the characters try to answer a question like "What does Joppa mean?" Most of what follows is dry banter and awkwardly timed dialogue that takes place in the characters’ real apartments. Its odd moments are similar to the tense pauses in sitcoms like HBO’s Curb Your Enthusiasm or the antics of Joppa’s tie-wearing counterparts in Comedy Central’s Stella.

Joppa characters often pretend to be experts on arcane topics and stage mockumentary-style interviews. In one, Mooney decides to be a robot and tells his interviewer to "Ask me some questions." The interviewer asks, "What’s your stance on Canada?" Mooney, speaking monotone says "No! Ask me what it’s like to be such a cool robot." It’s both heady and innocent.

In the past the creators wrote, shot, and edited, then posted the show each week. Neff would typically email the script a few days in advance and they would meet after work or on weekends to shoot. It is a low-tech effort with basic equipment that Neff calls "laughable." (He interrupted his New England residency with a stint in LA working on MTV’s Making the Band.) Neff edits Joppa on his computer with Final Cut Pro.

Times, however, are changing. Neff, Mooney and Watts finally live in the same town and because of the show’s growing scope and popularity, Watts says, "There is a drastic difference in how the show is being produced." They have not yet made significant equipment upgrades but they are upping the virtual ante in other ways.

For starters, they secured an agent. According to Watts, sometime between seasons two and three they started thinking, "We could turn this into something else." All three have day jobs unrelated to (intentionally) making people laugh. Watts says the thinking was, "We hate our jobs so let’s make this our job." Easier said than done but soon enough they connected with Rhode Island deejay (who goes simply by “Quinn”) who Neff says is breaking into the business of representing other talent. Quinn’s agent, Bob Eatman, backs Opie & Anthony so Quinn is using his experience as template for how to promote Joppa. He signed the trio as Joppa as well as each individually.

Another part of the Joppa push includes a web overhaul and the continual outreach to new audiences. Neff reports that after retooling the Joppa MySpace page in early fall he received an email letting him know that Joppa would be listed as a feature comedy. A month or so later, he visited the main MySpace comedy page and Joppa was listed again. "Someone in that dept is fans of ours," says Neff.

Also behind the scenes, the trio is starting to write as a team and is writing at least five episodes in advance. Watts adds that this takes the pressure of Luke Millbury, the musician who scores the show. Joppa does not follow a traditional narrative format but the new approach to writing may lend itself to more finely woven story arcs. Or it may lead them even further down the path of comic absurdity.

As for the path for the show and its creators, though Watts likes the idea of developing programs or writing for television, he readily admits that producing gratis for the Internet has fewer boundaries and more freedom than the jobs that would pay him to put words in the mouth of a tree that speaks French, for example. "Ideally it would be something where the three of us could create something and run with it," says Watts about his hopes for a career in entertainment. Meanwhile he looks forward to seeing what comes of the changes to Joppa and its current medium, Internet broadcast.

"Everything’s changing so fast in this digital age. I don’t think that motion pictures — I sound like a 70 year old! — are what’s ahead. It’s so unclear. The option could be to go anywhere, movies, TV, the Internet, it’s hard to say at this juncture where it will all lead," says Watts. And the bottom line is that uncertainty and spontaneity are just what keeps Joppa alive.