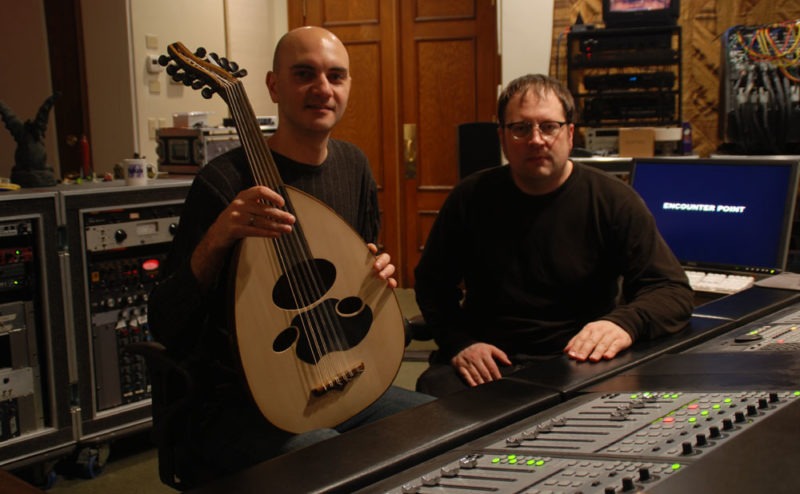 Share
Music composer Kareem Roustom talks about developing his career in L.A., finding his way back to Boston, and the making of his recent film Encounter Point, which screens this month.

Thirty-five year old music composer, Kareem Roustom has played at the United Nations and the Kennedy Center and contributed to major studios on films like Me, Myself & Irene (Fox Pictures) and The Two of Us (Paramount Pictures). Now, Roustom who moved back to Boston a few years ago, has found a new love — working on independent film projects and finding his true musical and cultural voice.

His most recent film, Encounter Point, is in theatres this month. Roustom recently returned from Bend, Oregon where he won Best Musical Score Award at the Bend International Film Festival.

NewEnglandFilm.com caught up with Roustom about his film projects and love for music before he hit the road on his new tour.

Gita Pullapilly: What instruments do you play?

Kareem Roustom: I play the Arabic OUD or UD and the guitar. I learned to play on my own. I was born in Damascus, Syria and moved to the United States in the 80s. I started to get more into the Arab OUD and that is when I started seriously playing and composing Arab music. This is what I call a musical and cultural journey. It was a way for me to discover what I love and get back to my roots. In a way, my music reflects my multicultural heritage: my Mom is American and my Dad, Syrian. It’s like being musically bi-lingual.

Kemo Sabe
This music from the short film Roustom scored for director Rana Kazkaz combines "spaghetti western" film music with Arabic music. The film is about a young immigrant Lebanese boy who wants to play in a game of cowboys and Indians with the neighborhood kids in an American city. However, the role playing in the game is divided along racial lines.

GP: Tell us a little about the work you have done.

Roustom: When I first started out, I was heavy into jazz and guitar and studied with a great teacher, Charlie Banacos. He is kind of a legendary teacher in the Boston area and the jazz world. At a certain point, that kind of music stopped resonating with me. And so that is when I started to get into a new type of music — orchestral music — film music was a big part of that. I just fell in love with the sound of the orchestra. I started really exploring and studying orchestra music and getting into it. At the same time, I was starting to make inroads with student films at Boston University.

Shortly after that, I won a scholarship in a BMI competition to go to Los Angeles and work as an apprentice under music composer Mike Post (NYPD Blue, Law & Order). So I moved out to L.A. and I got to see firsthand what the highest level of television music was like.

While I was there, I was fortunate to work on music for various shows — I even played the guitar in an episode of Dilbert.

The move was a great experience and it showed me how much the industry was changing in such a short period of time. Moving away from live musicians to synthesized, or sample based reproductions of live musicians. I later worked with David Schwartz, the music composer for Northern Exposure and Arrested Development. It gave me more in-depth experience while working full-time with him. David had a real appreciation for working with live musicians and somehow always found the budget to get really great players to work on projects.

GP: It sounds like a great opportunity. Why didn’t you stay?

Roustom: Well, I scored a couple of films in L.A. — mostly independent stuff. But in working in film and television, you have to write in a whole bunch of styles. I did heavy metal, jazz, folk, orchestra music — all in one project. After a while, you become confused and start to lose your identity in a way. I think at a certain point you get burnt out, and I really wanted to focus on my own music.

So in 2001, I rented a cabin the woods in Nova Scotia and later released a CD from my work I did then.

Then September 11th happened and I decided to move back to Boston. In a way, I realized that I could do a lot more good taking an active role in society than hiding out in the woods. The interesting thing is, a lot of opportunities have opened up for me as I began to find my own voice and focus on the musical styles that I love. I think people sense a sincere effort in creative work. Sure I learned how to write in a dozen different styles, and from time to time I’m still called on to do that, but it’s when you really put your heart into something that the best work comes out. At least that has been the experience for me. Had I stayed in L.A. and kept heading in that direction I might have been still trying to write compose like everyone else. Maybe, whatever the case, no regrets.

GP: So how did you get to work on Encounter Point?

Roustom: Encounter Point is a feature documentary film that follows a former Israeli settler, a Palestinian ex-prisoner, a bereaved Israeli mother and a wounded Palestinian bereaved brother who risk their lives and public standing to promote a nonviolent end to the conflict. This is a really amazing film. It is about grassroots peacemakers who are trying to get together and talk. In the Middle East, even that act can be very difficult.

There was a fundraiser to raise money for the film and the producer was a friend of mine. I saw the footage of this short segment of the film they were working on and I was completely blown away. I found it very moving, very balanced, and very intense. I had a great connection with the director (Ronit Avni). I knew this was a film where I could express both my American and Arab sides. In August of last year, they said they we’re getting close to a final cut. I looked at it with the director. They said they needed to get a final cut done by Thanksgiving. I was planning on getting married in October. So on my honeymoon, I was writing sketches and working on a score. Eventually, when push came to shove, it took six weeks to write, record and mix it.

I was very lucky because I could use a lot of ethnic instruments and we were able to put a budget together and hire some of the best Middle Eastern musicians in the country.

I keep getting asked if there is a soundtrack in the works; I hope so but it’s not up to me. The film is opening in select theatres in the U.S. and Canada in hopes to qualify for an Academy Award nomination.

GP: What tips can you give to filmmakers as they try to find music for their films?

Roustom: I think the key is to find somebody you like as a person. That is really important. You need someone you can connect with and develop a partnership with. You need to find someone with a similar outlook and see things that you see. What a composer does for a director is really interpret their thoughts. This really important, because most of the time the director cannot express their vision in purely musical terms, so the composer has to make that transition. I find it amazing that film schools never seem to prepare directors for working with music composers. The musical element of cinema is such an important part of the process.

Perhaps most importantly, a director should find a composer whom he or she can trust. This is very important. Often times I want to try something experimental and I know it will work, but there is no way to preview it for the director so I have to say is "Trust me on this!"

GP: Any advice on budgeting for a music composer?

Roustom: A good composer should be able to put together a budget. Typically, we know we have to come in at the end of production when most of the money is spent. So what you try to do is determine how many minutes of music are needed for the film. This is the point where the director and composer sit down and watch the film together and time everything. When I first see the film I start thinking of sound and color and what the fabric of the music should sound like. In other words, I start thinking about what instruments to use and what style, mood etc. Once you add up the minutes, you can realistically determine how much you can spend. Once I get an idea of the budget, I can determine what musicians I can higher to start composing the film.

GP: What are you working on now?

Roustom: Right now, I’m writing for the Philadelphia Orchestra. The piece is exploring themes for the Arab world. The whole concert is about Jewish and Arab harmony and the influence of those musical traditions on the Western orchestra. I also have a tour coming up in early December. Finally, I just finished scoring a short film by Rana Kazkaz called Kemo Sabe which is part of AFI Women’s Director Series.

My CD with violinist Hanna Khoury, a good friend and terrific musician, is called Almitra’s Question and the name of our group is the El-Zafeer Ensemble. The music is a hybrid of Arabic music and jazz.