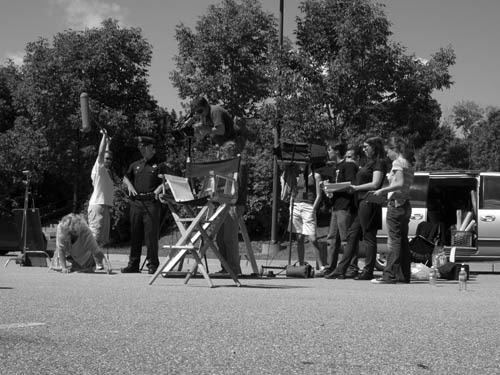 Share
Filmmaker Chris Sparling pulls out the big guns to market his films An Uzi at the Alamo and Balance, the latter which is screening in RI this month.

Tick off the job description of an independent filmmaker: creative writer, talent handler, business manager, financier, marketing guru, technical genius, oh yeah, and relentless artistic visionary. Does any one human have all of these proclivities? No. But those who find even limited success bringing their own projects to screen and to audiences (not automatically the same thing) can attest that all areas need someone’s attention. And the very nature of making a film outside the system means often enough, everything’s left to you.

Chris Sparling knows this as well as any independent filmmaker. He may not call himself an exceptionally skilled marketer, but he would probably fess up to his work ethic and persistence. It’s more a matter of fact and circumstance that to get as many people as possible to see his first feature film, he had to attack on all fronts. That meant going viral, in other words, using existing social or communications networks to spread the word fast, cheap, but hopefully not out of control.

In addition to a festival run, Sparling’s An Uzi at the Alamo is available on Netflix, Amazon, CinemaNow, and several other sites. It has a website, a blog, a MySpace page. The trailer is on YouTube, VidiLife, and Google Video, for starters. Several indie outlets including Cinephelia and FilmThreat have reviewed it. All of this is his doing. Sparling tracks down every possible lead to bring more attention to his work, which he is counting on as his audience for future projects. NewEnglandFilm.com had a chance to catch up with him to figure out what advice, marketing and otherwise, he has for fellow independents.

Erin Trahan: What brought you to make your first feature, An Uzi at the Alamo?

Chris Sparling: It may sound crazy, but I came up with the title first. I was living in L.A. with friends, we were actors, struggling for bit parts, and I came home [to Rhode Island] to finish college. I moved back to L.A. on September 10, 2001, and the industry just shut down. With the anthrax scare, agents and casting directors were hesitant to open mail, so no one was accepting headshots. I was doing tops, 20% of the auditions I did the first time I lived out there. I finally decided: This isn’t working. I am going to transition, to make a film that I can star in, to create a showcase piece for myself as an actor and writer. It was a long process but that’s how it started.

ET: So essentially you decided to take your career into your own hands. Could you talk about your background in film? Is that what you were studying in college? Where did you learn the technical skills?

Sparling: My version of film school was making this film. Just out of high school I didn’t know what I really wanted to do. I looked at RISD but at the time it was more theoretical. That is a vital part of filmmaking but I wanted to either act or make films. I wanted to do it, not study why people do it, so I went with my second interest. I have my bachelors and masters degree in criminal justice. At one point I toyed with applying to the FBI.

I tell my students that you have to have an arsenal. You never know what people are looking for. If they say, ‘We are looking for this,’ you have to be able to say, ‘Oh I have one of those,’ as opposed to writing just comedy or just drama. I had never thought about writing a horror film, but I am just finishing a horror screenplay.

ET: How did that go?

Sparling: It just kind of sucked, it seemed so formulaic. But that was me realizing this is a business script. You have to make a film that makes money. You make one for the money people, then make one for yourself. I also wrote a 50-page business plan.

ET: Seriously? That is so much work.

Sparling: It’s just part of what you have to do. So few filmmakers ever see a return on their money, so few investors ever see a profit — never mind profit — a return. I am not the kind of person who can look someone in the eye and ask them to invest when essentially what I am asking for is a donation.

In going through the distribution process with Uzi, I learned how much of a business it really is. You may like to think of the artistic virtues, but if you want to do it as a career, it’s no different than selling vacuums. The whole point is to make money, not to everybody of course, but I took Uzi to a bunch of different film markets, we had a small sale in Greece but it’s a tough sell — it’s not what they are looking for. They are looking for something that translates well and is universally themed. That’s what prompted me to go out and try a horror film.

ET: The Providence Journal compared An Uzi at the Alamo to Garden State. In it the main character, Alec Thames, informs his family and friends that he’s planning to commit suicide on his 25th birthday. What do you think the film says about Alec’s generation?

Sparling: Alec was a writer, that was his thing, but he didn’t submit any of his books to a publisher. He knew he could write but didn’t know where to go with that.

I think part of it, too, is that there’s no true path anymore. It isn’t as clearly delineated as it was for our parents where you go to high school, maybe college, get a job, have a family early. There are people out there with college degrees who can’t find jobs, people who are 25 years old and still living with their parents. The suicide thing wasn’t because Alec was depressed, it was more that he didn’t know what else to do.

ET: One of the reasons we’re talking today is because of your significant success with marketing and self-distribution. Can you walk me through how you approached creating an audience for An Uzi at the Alamo?

Sparling: At the most basic level, you have to utilize all available viral marketing. Do everything you can that’s free. Set up a MySpace page, put clips of your movie on YouTube or AtomFilms, then start adding friends to your MySpace page.

But even before that, you have to know how to sum up your film. Know its sellable points. Be able to say you have something that other films don’t. Get the film to news sources, get it reviewed, then use the reviews. If you have an opportunity, go to a film market — the American Film Market in Santa Monica, IFP, see how it really is. There are booths set up with agents who are selling 10, 15, 30 films. They will see the first three minutes and they have to be grabbed.

Deliverables are another whole huge part of distribution. You need versions of your film on different formats; you need a film print, a copyright form, Form PA for ownership. You need a letterbox version, a full-screen version, you need to have quality stills from the set, that’s what they’ll use to design cover art and the poster. These are things a lot of filmmakers don’t think of until it’s too late, but if you can’t provide deliverables the deal may be off the table.

Sparling: A sales agent works in conjunction with a distributor. They go out and try to sell the film, usually internationally, starting with theatrical sales, then down to home rentals, the Internet, down the line through all the remaining markets. The sales agent brokers the deal.

ET: How did you choose your sales agent?

Sparling: I read up on distribution and contracts, and what to avoid, then found a reputable company. They have decent films on their slate, stuff I had heard of, actors I knew, and the terms we negotiated fit the bill. They got me on Netflix and CinemaNow, things I would have had difficulty doing.

ET: I know other filmmakers who have tried and tried to get on Netflix. Have you seen much impact?

Sparling: Last month I met the CEO of Netflix and mentioned that my film is on his site. I was curious, I wanted to know how my film was performing. But unfortunately, it was a flat buyout. They only have a certain number of disks in rotation. So unless the film becomes a cult hit, and they buy another block of disks, I won’t really know. If there’s a way filmmakers could have a special login, so I could see how my film is performing, what cities rented it the most, ultimately I would use that information,

ET: Do you keep a database?

Sparling: I have spreadsheets for keeping tabs on who I have sent to and what their response is. It can be overwhelming. There’s only so many hours in the day! I am over here premiering my next film but in the meantime I am still trying to market Uzi. Unless you have teams of people, it’s what you have to do or you’ll have a film that no one knows about.

ET: Right! On to your next project. What are you premiering?

Sparling: It’s a short called Balance, a project I did while editing Uzi. Editing is such a painstaking process. I did some re-shoots for Uzi, with just the sound guy and DP. It told me you could probably go make a short with a skeleton crew, so I wrote a short and shot it over 2 weekends in Rhode Island. It’s pretty touchy stuff, about an everyday American mom and dad whose son is nearing death. They are pretty much faced to do the unthinkable and their struggle is to find the balance between morality and mortality.

ET: So feature, then short?

Sparling: When I started teaching people asked me, should I make a short or feature? And I would say make a feature, it generates more attention. But it’s funny. Now I say if you’ve never made a film, make a good, good short. Don’t spend yours or other people’s money. You can make a short that’s competitive because you are not up against other feature films starring people like Gwyneth Paltrow. I guess it depends on goals for your project. Uzi wasn’t received as well in the festival circuit as I would’ve liked. Living and learning, this time around I want to focus on good festival credibility.