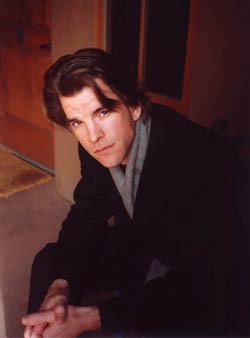 Share
Actor, writer, and musician Michael McGlone brings his latest novel And All the Roses Dying to Somerville, MA this November.

Actor, writer, musician, Michael McGlone is bringing his newly finished novel And All the Roses Dying to the Somerville News Writers Festival held at Jimmy Tingle’s Off Broadway Theater on November 12th 2006. It will be the first time he has publicly read an excerpt from his latest novel. In addition to writing, McGlone is actively pursuing many alternate aspects of the arts world. He has appeared in numerous notable films, published literary works, and performed as a singer/songwriter in top clubs in New York City.

Most recently Michael McGlone appeared in the limited release film Bad City. The film is a dark take on politics, crime, and dirty cops in Chicago. McGlone effectively plays a politician accidentally caught up in the underworld of the city — a mix of lies, drugs, murder, and prostitution. McGlone has other theatrical projects in the early stages of development that are shaping up. When asked what he looks for in a script, McGlone answered, "It’s as fundamental as good writing." He’s interested in the "words and conception of the story and good characters," above all.

McGlone got into acting when he left art school at the age of 19. School was not the right place for him at the time, so he moved to New York City to act. He got into acting as many people do, by having pictures taken, going to auditions, and meeting casting directors. McGlone says he had "good fortune early on." For example, he heard about the audition for The Brothers McMullen by reading about it in the paper. Early in his career McGlone began working in documentaries, voice-overs, and commercials, work that he continues to do now. He studied for a year and a half with famed acting teacher Gene Frankel in New York City. Although McGlone tried living in LA for about seven months, he found that he felt "more at home in New York."

McGlone’s recent novel, And All the Roses Dying, is a revision of a book he wrote in 1993 when he was 21 years old. The book had sat unread for many years, but McGlone thought that the underlying story was worth a second look. So, he went back and rewrote the novel, changing almost all of it. The novel is the "story of 1952 Hell’s Kitchen’s Irish and the central character’s entanglement of a bar owner’s murder," says McGlone. The main character, Jack Fagan, struggles with his past, which proves inescapable. McGlone is interested in the subject matter and setting of the novel because of his own Irish heritage and heritage in New York City.

Hell’s kitchen is typically known as the area in Manhattan between 34th and 59th Streets from 8th Avenue to the Hudson River. Originally, Irish and German immigrant groups inhabited the area of Hell’s Kitchen. They were drawn to the area in the 1850’s because of the Hudson River Railroad’s construction of a station at 30th Street and 10th Avenue. During Hell’s Kitchen’s formative years, the residents became dependant on the rail yards, dairies, slaughterhouses, docks, soap factories, and breweries that were housed in the area. As the population grew, notorious crime gangs developed, giving Hell’s Kitchen the reputation of a dangerous cutthroat place. In the late 19th century the area was described as "the lowest and filthiest in the City, a locality where law and order are openly defied, where might makes right, and depravity revels riotously in squalor and reeking in filth" (The New York Times 1881). Hell’s Kitchen’s reputation continued into the 1950s, the time during which McGlone’s novel takes place.

Rather than planning the book’s events methodically, McGlone "discovered the book as it came out of [him]." The first sentence of the book got the story rolling for him and encouraged him to finish the novel. And All the Roses Dying begins with the line, "Leo Fagan always took a cab to the job." It sets up the story that reveals a world of gangsters, murder, and Hell’s Kitchen in the early 1950s. McGlone is actively pursuing the publication of And All the Roses Dying.

McGlone’s other books include CAL, Dice, and Hourigan’s Song. He also writes short stories and verse. When McGlone has the entire day to commit to writing, he settles into his work within the first hour of waking up. From there, he writes for about eight to 10 hours. He writes at home, where the only sounds of distraction are those of the NYC street traffic coming in through his window.

Although McGlone will write screenplays, he prefers writing books. The "award of the book is greater for me because it is insulated — fully realized," says McGlone. In contrast to a book, a "screenplay is a means to end," McGlone explains. While a book is complete in itself, a screenplay is written with the intension of making a movie.

As a writer, McGlone is an active reader of literature. When asked what his literary influences are, McGlone replied, "anything that I’ve read and considered good." He also mentioned that he enjoys reading work by authors such as Charles Dickens, John Irving, and Victor Hugo. At the moment, McGlone is reading The Hunchback of Notre Dame.

In addition to his work as an actor and writer, Michael McGlone is an accomplished musician. He began performing seriously in New York City in 1996. Early on, he performed at clubs such as the Bitter End, the Cutting Room, and The Triad. McGlone describes his music as "lyric driven acoustic Rock and Roll." McGlone writes the lyrics to all of his songs. Currently, McGlone has released two albums, "Hero" and "To Be Down." McGlone has been playing with the same musicians for the last two years. "I’ve been fortunate to hold onto them," says McGlone of his musicians. When he is choosing music to listen to, McGlone tends to lean toward music much like his own — lyric driven rock and roll. He is a fan of John Hiatt, Bob Dylan, and Elvis Presley.

With acting, writing, and singing/songwriting, McGlone proves to be driven and obviously productive but has little time for other things. "My professional pursuits are such a great joy to me that much of the time that is free to me is spent [working on those things]," says McGlone. McGlone shows a definite love for his work and all that he is involved in. His accomplishments thus far in his life appear to foreshadow many other great things in the future.