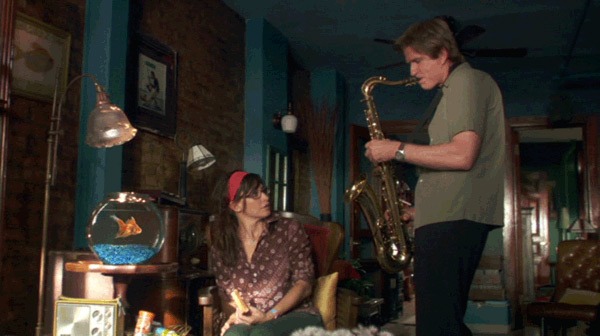 Reeling in a Dream

Claudia Myers has lived a film student’s dream: the first script she wrote in film school has become a feature film starring big name actors and best of all, she directed it herself. Her script, Kettle of Fish is a romantic comedy in the tradition of the "screwball comedies" of the 1930’s and 1940’s. The main character Mel (Matthew Modine) is a womanizing saxophonist who sublets his apartment to a scientist named Ginger (Gina Gershon) while he moves in with his latest girlfriend. Before long, Mel falls for Diana (Christy Cashman) and moves back into his apartment which he is forced to share with Ginger.

Myers says her writing was inspired by the whole sub-genre of screwball comedy, but not one particular film. "I saw them growing up and I thought they were smart and sweet films. I wanted to write something with charm that was funny and emotionally truthful."

Myers wrote the script while attending the Master’s program in film at Columbia University. Her script won a Nickelodeon Screenwriting Award in 2001. While she was at the Sundance Film Festival with one of her short films, she met a producer who had read her script and liked it. She began a series of conversations with Saint Aire Productions, a company based in Boston and headed by Christy Scott Cashman, Laura Bernieri and Mike Cerrone.

Myers says the producers were never reluctant to allow her to direct the script. "The producers saw the shorts that I had done and we had fairly extensive conversations," she says. "I talked to Christy Cashman a lot. We had a really good relationship and they felt I had a good handle on how to tell the story.

"When I wrote the script, I didn’t have a particular actor in mind for the role of Mel," Myers says. "[But] during the casting process, Mathew Modine was one of the first people we discussed." The actor was in Greece filming another role and read the script on the film set. "He really liked it," Myers says. "He thought it was fresh, lighthearted and fun, but he had a narrow window in which to do the film."

The production timetable was dictated by both Modine’s availability and Myer’s pregnancy, which was in its third trimester when filming began. "We had an extremely intense shooting schedule," she says emphatically. The tightness of the schedule did not allow for a great deal of rehearsal time. "I had two rehearsals with Matt and Gina where I could discuss certain elements of the characters with them."

Improvisation on the set was another element that fell victim to the short time frame. "I love to collaborate," Myers says, "but on this set we were under such time pressure that we couldn’t." One notable exception was a scene with Christy Cashman. "It wasn’t specifically scripted," Myers says. "She improvised a dance and it came out very funny. It was one continuous take where she tried all sorts of things and it still makes me laugh every time I see it."

Filming took place in New York City during the summer of 2005. "We shot all over the city. Brooklyn, Pier 11, we shot several scenes in Harlem and Central Park, of course," the director relates. "It was fun to use the city that way."

One key location needed to be changed however and was the cause for the only major re-write that occurred. There was an important scene in the script when Mel first sees Diana and it all took place in and around the subway. "The realities of filming on the New York City subway are that it is prohibitively expensive," she says. Although it was difficult to imagine the scenes taking place anywhere else, Myers and the producers decided to use a water taxi instead. "We thought that was unique," she says. "I had to re-write the initial scene and all the subsequent scenes to be on a boat."

For this first-time feature director the first day on the set was thrilling. "Walking up to the production office and seeing Kettle of Fish on the door and going in and seeing all these people busy at work was exciting," she says. "The first day is a beginning and a culmination of months of work. You have to have a big sense of satisfaction just to begin shooting. It was very satisfying but it also made me feel like I really had to deliver."

When asked what her working style is as a director Myers says playfully, "benevolent dictator?" Myers goes on to say that she is generally calm on the set, "This has been documented. I have a schedule for the day and generally a shot list. Although for this film usually we weren’t sure of the location until the day of filming, so the shots I had in my head sometimes had to change when we got to the actual location. There’s a lot of thinking on your feet. That’s why the relationship with the D.P [director of photography] is so important."

Myers had worked with the DP, Neil Lisk, before on a short documentary project. She says their strong, positive working relationship made the project go smoothly even with the time constraints and changing locales.

The film was shot in HD video for financial reasons, but Myers is very pleased with the look of the finished film. "We used film lenses, the lighting was really well done and thanks to Neil’s ability with it, it really looks like film."

For the initial editing process, Myers was as involved as she could be with a newborn baby. "I couldn’t physically be there but I watched all the cuts and spoke with the editor on the phone, sometimes several times a day. For the fine cut, I was able to be there more."

Of course the true test of any film is the audience’s reaction to it. One of the highlights for Myers was the film’s screenings at the Tribeca Film Festival in New York last April. According to Myers the film screened six times in the largest venue and all six sold out. She calls the audience reaction to the film "phenomenal."

"It was daunting going in," she admits. "I wondered if it would be silent. But if it’s comedy you know right away, and I was extremely pleased. It was a very gratifying experience."

The whole process was gratifying for Myers. The writer/director says she feels she achieved what she set out to do with the script and the film. "The story is about the surprising, magical aspects of love and the crazy things we do for it. The film is cute, funny and life affirming. People respond to that in it."

Claudia Myers’s story shares some of the same qualities as her film and all film students, scriptwriters and aspiring directors can take inspiration from it. Her accomplishments didn’t happen without her own hard work and effort of course. She continues to write and work on freelance projects while balancing the demands and rewards of family life. She has written another script, Wild Oats which she describes as "an atypical buddy film about two older women who discover that they have a wild side. It’s Thelma and Louise on Social Security." As a writer she says that any new experience is fodder for her work which sounds like her dream is just beginning.