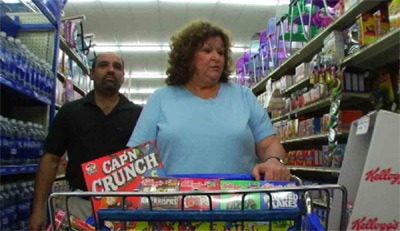 "Muriel is the kind of person you either can’t stand or completely adore," Kim Romano says of the title subject of her short documentary film screening at the Boston Jewish Film Festival (BJFF) in November.

Romano adores her, in fact, Muriel is one of her best friends.

The film started as a 10-minute final project for her film class at the Center for Digital Imaging Arts at Boston University. After she graduated in September 2005, she worked on the film on and off for a year, developing the 18 hours of footage into a 20-minute short.

The film documents the life of Muriel, a Jewish New Yorker who lives in Key West, FL. It follows her as she deals with her cheating husband, gay best friend, bipolar son and her husband’s teenage son from his previous affair.

Romano met her 11 years ago through Muriel’s husband, Artie. He insisted that Romano meet his wife. On an extremely hot day in Key West, Muriel came to see Kim and her boyfriend at their home. "She walked into the door, turned to my boyfriend and said, ‘You must really love her if you can f*** her in this heat,’" Romano says.

"I can relate to the way she uses humor to cope," Romano says. "They say that subjects reflect the filmmaker and that’s why they’re drawn to them. I don’t want to know what that says about me."

Muriel was solicited for a BJFF screening by Kaj Wilson, the artistic director, when she saw it at Boston University. "It made me laugh, and it made everyone else laugh as well," Wilson says.

The BJFF is one of the premier Jewish film festivals in the world, with 13,600 people in attendance last year. They solicit films from all over the world including the Berlin International Film Festival and the Jewish Film Festival, only accepting 10 percent of the films they screen. Sara Rubin, executive director at the BJFF says that the festival has a loyal audience. "It creates buzz about a film. If you show a film at a festival and people talk about it and then when it comes to a theater, people are really excited to see it," Rubin says. The festival also has a partnership with WGBH Boston, so the festival often recommends films to them, which are then shown on public television.

Muriel will be shown with six other films in the "Big Fun" category. "The films in that category lend themselves to a fun and funny program that would work for a younger audience as well as an older audience," Wilson says.

Romano began traveling the film festival circuit with Muriel in October with the Woodstock Film Festival. "You definitely learn what the most important festivals are," Romano says. She’s taken advantage of the festival audience, using their comments to re-edit and improve the film. "I had to be careful to make sure the audience liked all the characters. Some of the footage was questionable," Romano says.

The festival circuit has taught Romano how to promote herself and her film. At one festival, she watched a first time filmmaker stand outside every screening of every film and hand out fliers for his own film. On the night of his screening, the house was full. "It was the only time a newcomer showed to a packed house," Romano says.

As an undergraduate at Harvard, Romano studied Visual and Environmental Studies. She made two films while in school. The first was a fictional short called Library about the fantasies Harvard students had while studying in the library. The second was a short documentary, called Pretty Fat, about overweight women. "What makes a good movie to me is that it’s short, so you don’t bore people," Romano says.

After she graduated, she spent her time directing and raising money for non-profit organizations and raising her now 16-year-old son Cody. "My son was my technical support," Romano says. "I stayed up until two in the morning editing a scene and when he saw it in the morning he said, ‘Mom, I could have done that in 10 minutes.’"

Muriel was shot using a DVX100A camera and edited with Avid. "Muriel got frustrated with all the camera equipment cluttering her house, but in the end it was worth it for her because she got to see herself on film," Romano says. "I’m not even exaggerating when I say that she probably watches it every other day. It’s never enough attention for Muriel. By the end she was asking me, ‘Is it too late to change the lighting on this?’"

In the near future Muriel is going to get to see a lot more of herself. Romano plans to turn Muriel into a feature length documentary. "It was hard to cut 18 hours of footage down to 20 minutes," she says. "I didn’t have to do a lot of extensive editing to make the film funny. Almost all of the footage was funny."

Kaj Wilson says that the feature length version of the film could be considered for screening at next year’s festival based on the reception of the short. "Muriel’s attitude, her life and her relationships are somewhat unusual. Her relationship with her husband’s son, her bluntness, all of it worked together to create a strong portrait in a short period of time. She has a remarkable personality," Wilson says.

This time around, a lot of the people who got cut out of the 20-minute version will have a stronger presence in the feature length. "Eric [Muriel’s son] was upset that he was cut out. He had a little bipolar rage," Romano says.

She has plans to do another documentary in the near future as well. She will follow a gay Jewish couple that lives in Hawaii. "It will be similar to Muriel in style," she says. "They’re funny. Not like Muriel, but it will be entertaining."

In the future, Romano would like to collaborate with her son, a budding filmmaker himself. But for now, Romano plans to focus on the feature length Muriel. "The story continues," she says. "There’s still a lot of information to be revealed about Muriel."