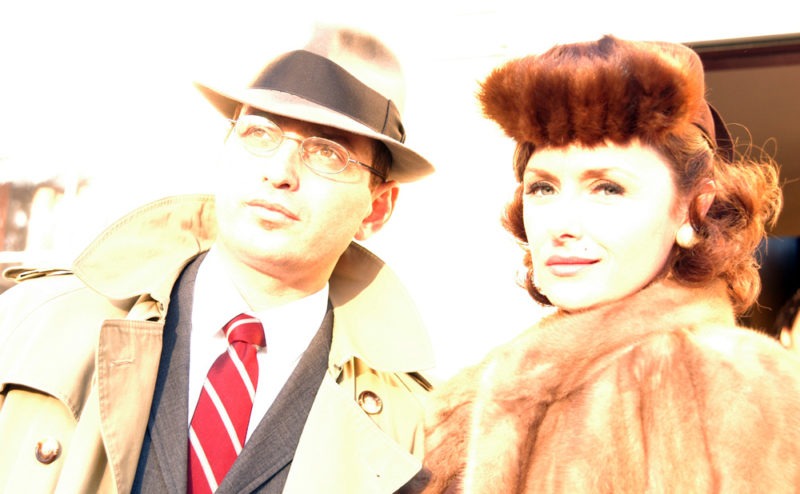 You don’t need to go to LA or NYC to make a film. Sometimes, the perfect location can be right in your back yard. Kristen Vermilyea, the producer and main actor in Straight Forward decided to go back to her hometown to make her first feature film.

We spoke with Kristen Vermilyea about her film which will be viewed at the SNOB (Somewhat North of Boston) Film Festival. The film is a noir-psychodrama filmed at an old farm house in Pembroke, New Hampshire.

Gita Pullapilly: Tell us a little about your film.

Kristen Vermilyea: This is a story of a 1940’s movie star who is exiting the height of her career. Just when you think you’ve got it figured it, the plot twists…

At the time when Motion Picture Studios controlled Hollywood’s elite, trouble arises when a successful writer and his aging starlet wife attempt to conceive a child and are inadvertently introduced to a young, dangerous loner looking for fame himself. Extenuating circumstances put each against the other, making it difficult to find the truth.

It is a black and white film but all of the flashbacks are in color — this is kind of the opposite of how it is traditionally done. But it helps bring out a lot of shadows that you see in a typical film noir.

GP: Why did you choose New Hampshire?

Vermilyea: We were having a difficult time finding funding and finally one day I said to the writer/co-producer Stacia Crawford that we should just film at my mother’s farm in Pembroke, New Hampshire. I called my mom up right away and said, what do you think about us shooting a movie there. My mom said sure why not! We did most of the preproduction work in August/September 2004. We shot in Pembroke for 10 days in November 2004. It was great to be back home. I was born in Massachusetts in Melrose but lived most of my life in New Hampshire. I actually spent most of my life in the farm in Pembroke with two cows, two pigs, 20 chickens and a bunch of Newfoundland dogs! Last year, I got married at the farm.

GP: How difficult was this film to make?

Vermilyea: Everything just came together. You hear filmmakers say this all the time but it really was just meant to be. Even during the last minute when we realized we needed one good exterior day — we ended up getting two of the most gorgeous days. The teamwork was amazing and we had such a wonderful group of people working on it. Our film director, Jason Noto, as well as most of the film’s actors came from New York. We had a great production designer (Sean Duhame) who, on a $400 budget, made my mom’s farm into a 1940’s country house. He helped make the film very credible. He covered all the appliances in the kitchen in such a way that you’d never notice it. It was very impressive. It’s these things that really make the film work. Of course, shooting in my hometown made it a lot easier. My mother is the executive producer on the film. My mom knows so many people and would run into people who had restaurants, hotels and businesses in town and say in her charming way, "Do you have anything you can give us?" My mom was out on her motorcycle one day when saw these two 1940’s cars in town. She said, "My daughter is making a film. Could she use your cars in the film? That is the kind of thing that kept happening — it just worked out. She even hosted the entire cast in our house. We lived in one room and shot in another!

GP: So your film will be playing at SNOB (Somewhat North of Boston) Film Festival?

Vermilyea: This is the very first place it is showing and it will be showing as a work in progress. We have a working full draft — an 83 minute cut. We’re promoting it as a work in progress so we can get feedback from the audience. This is perfect for us. Our film has a lot of twists and turns in it. So when the audience will hopefully want to see it again, they’ll know how it evolves.

The staff at SNOB saw it and wanted to screen it. We plan on submitting it to other film festivals. We’re really excited about it and hope it will do really well. The film noir movement is experiencing a renaissance right now. We made this film on a complete shoestring budget but hopefully we can get distribution and sell it. There is definitely an audience for it.

GP: So what’s next for you?

Vermilyea: Well, I was struggling actor in New York for five years and was lucky enough to have some success. I played Nurse Ginny for four seasons on Third Watch, and did smaller parts in indie films — it’s a tough life, but I am so glad I did it. Now I’m living back in New Hampshire, which I never thought I’d be doing, but I met my future husband and you know how it goes from there. There is a great film community here and I’m looking forward to becoming a part of it and can’t wait to make more films in New Hampshire. It’s really film friendly and a great place to live.

GP: Do you have any advice for filmmakers?

Vermilyea: The business side of things and pre-production is incredibly important. We are so lucky everything fell in place. Honest business dealings are super important and making partnerships and relationships at the very beginning helps. You can start a company with a best friend but remember making a film is creating a business and a product. Make sure there is a contract in place to protect everyone. It’s show business. Go with your heart and your gut. Ask people for favors and appreciate and acknowledge people when they do nice things for you — no matter how small.