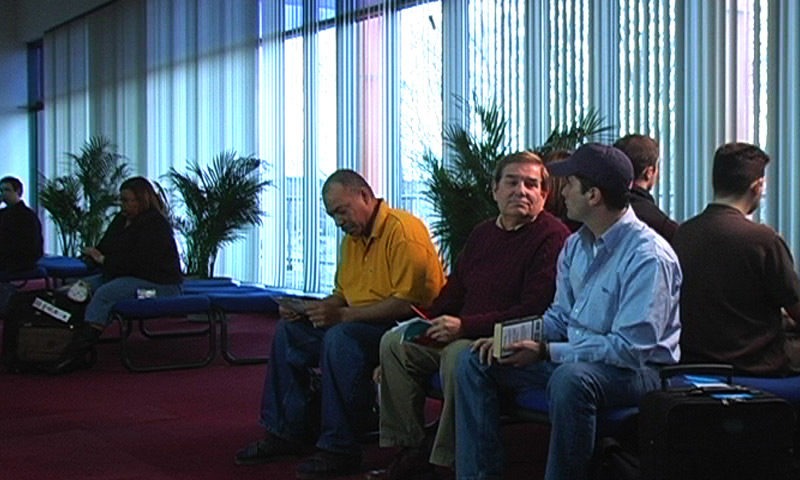 Share
What if your spouse doesn’t love you anymore and breaks you the news in a long distance phone call? This forms the premise of Scott Kittredge’s short, The Terminal Conversation screening at the New England Film and Video Festival this month.

Many an artist has been told not to quit their day job and Scott Kittredge is heeding this advice, but he is spending most of his off hours pursuing his passion for making films. His most recent short film, Terminal Conversation is about a man on a business trip whose wife calls to tell him she is in love with someone else. In the airport he meets a stranger, who may or may not be God, who tells him his emotional choices and where they will lead. He can forgive his wife or not forgive her and each will lead to a different outcome for him and for her.

"I didn’t want it to be religious, I just wanted people to think about what they would do with choices," Kittredge says. "Lots of people think it’s spiritual."

Kittredge says the subject of the film came to him through a friend whose wife called him to say that she wanted a divorce while he was on a business trip to London. "He approached me with the idea for a film because he said he had a great story. I told him to write a script, he did, and it was great." The friend chose the pseudonym Clark Smith for his writing credit on the film. After the script was written, Kittredge recruited another friend, Marty Langford, to help him re-write the script to make it work as a short film.

"The original has multiple characters," says Kittredge. "Initially it was going to happen in London. I even had a free London taxi to use, but in the end it was too complicated with the set dressing, etc." The screenwriters pared the story down to two characters and set it in an unspecified airport

The budget for Terminal Conversation was $3500. When asked how he secured the funding for the film Kittredge answers, "I threw a party." The admission charge was $20 per person and he raffled off an IPOD shuffle. Kittredge also received a donation from a college friend and another from one of his aunts. "About three quarters of the film was funded through individual donations," he notes.

Kittredge was both practical and resourceful when it came time to shoot. His main set was an airport, but he was unwilling to seek out permission from the nearest airport because of the permits required and the probable cost. He began to search for a place that could appear to be an airport and to which he could have access for two days of shooting. In nearby Springfield, Massachusetts he found the perfect place in the old Basketball Hall of Fame building.

"They built a new Hall of Fame next door but the old building is still there. I remembered going there as a kid and I remembered that it had floor to ceiling windows upstairs." Kittredge got the go ahead from the director and he and his crew set about creating their fictional airport. "We really had to clean it up," he says. "We had to replace over 150 floor tiles. We took them from all over the building to make the terminal floor."

Besides money, Kittredge’s other limited resource was time. He had one weekend to shoot all that he needed. "I worked with the DP (Richard Sands) to figure out how long each shot would take and then figured out what I could do in the time I had."

They shot for two full days at the location. The first day Kittredge shot all of the footage using extras and the second day he shot the conversation between the two characters that is the heart of the film.

The film features two actors for the characters of Dave and the Stranger and then the voice of Dave’s wife. A hometown connection led Kittredge to his lead actor, Douglas Dickerman, a native of Longmeadow, MA. Kittredge was staying with friends at Sundance as "a film tourist". He was talking about his film and the friends said they knew someone who was an actor. Kittredge was skeptical at first. "I went to his website and it was impressive, so I sent him the script and he loved it."

Dickerman says what appealed to him was the theme of the film. "Forgiveness and whether or not to grant it," he says. "You can say the words but to actually let go and to emotionally release yourself and someone else from a wrong doing is one of the most difficult things to do.

The Stranger is played by John Depew who is the CEO of Bradford Medical Associates in North Andover, MA. He began acting seven years ago and has played many roles in local stage productions and films. Kittredge took an acting class in order to understand what an actor needs from the director. For this film he found that each actor had their own way of working. "I needed to talk to Doug one way and I needed to talk to John a different way."

Dickerman says, "I think one of the great things about Scott is that he gives the actor permission to contribute. I value that as an actor."

The actor found one key phrase in the script that gave him the essence of his character. "John’s character says to my character, ‘This is your one true love.’ Everything else came from that." The other essential character tool was the proper shoes. "Shoes are key," says Dickerman. "If you talk to a lot of actors they’ll tell you that the wrong shoes can ruin the whole thing. I always saw white leather sneakers [for the character]. Scott and I went shopping for shoes and we were able to find the exact pair I had in mind."

Kittredge studied Industrial Design at Syracuse University, but part way through the five year program he became interested in production design. "I did an internship in L.A. and worked on Batman and Robin. I got to work on the Batmobile," he says, with a touch of awe still in his voice. "After school I went back to L.A. and I did lots of jobs. I even worked as a nanny for a Beverly Hills billionaire." Although he was able to use contacts to secure interviews for design jobs he came up against strict union rules which required him to be a member in order to work. Eventually he decided to accept a position at Hasbro, Inc. and move back to his native Massachusetts.

At Hasbro he met a co-worker named Brian Jackson. "Brian and I always talked about movies, and one day we said, ‘We should make one.’" They used a regular consumer camera and did most of the work themselves to make Waxing Souls. Energized by the experience, the producing partners moved up to pro-sumer level equipment and made a romantic comedy called Love Delivered. Their ambitions expanded with their third film, Snacks which featured a cast of kids from the local drama school and was shot by a hired Director of Photography. Along the way they formed a company called Bowling Squirrel.

Kittredge explains that the first name they chose for their company — Organ Grinder — was already taken. "We needed a unique name and one that wasn’t film related. We were shooting Love Delivered and we were in an old bowling alley that was infested with squirrels and that was it."

Jackson had a family emergency which required him to move to New Jersey so he had to step out of the work with Kittredge. Terminal Conversation is the director’s first solo effort. "It was daunting at first to work alone," he admits. "Brian and I relied on each other for different things. I learned fast though." Kittredge says that one of the most important things about making a film is to set a date for the production. "You look at what you need to get ready and then you pick a date three or four months down the road. Then ya gotta do it."

Kittredge held a local premiere of the film at the Basketball Hall of Fame, but he’s looking forward to several upcoming festival screenings including the Connecticut Film Festival on Oct. 7th and the Boston Film and Video Festival on Oct. 8th.

Kittredge has kept his day job, but the passion and energy he devotes to his films may soon find him pursuing filmmaking full-time. He has three feature film ideas that he is developing. "For the past three years in my spare time I’ve been making movies. Eventually, I want to be a full-time filmmaker." He also has no plans to move from his home base in central Massachusetts where he has found a community of artists and filmmakers. "It’s very important for me to be in this area. There’s lots of talented people here. Everybody’s really excited about filmmaking around here. People opened their doors to me and gave a lot of time. I’d like to work here and shoot my films here."