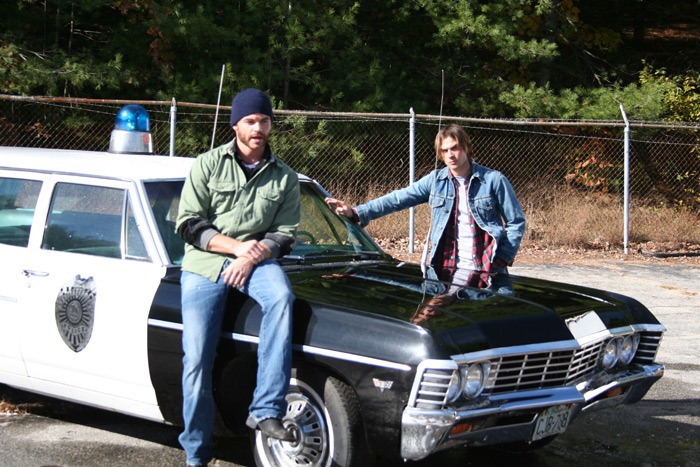 Share
A report of news & happenings in the local industry for September 2006.
Email news to news@newenglandfilm.com.

The Independent Film Festival of Boston is co-presenting the theatrical release of the hit of indie film of the festival circuit, Four Eyed Monsters. It will play every Thursday night in September at the Somerville Theatre at 7:30 pm. For more information, visit www.foureyedmonsters.com. The first Boston-area screening is September 7th.

Is arts funding on the rise? Connecticut Governor M. Jodi Rell announced in August a proposal — a new Cultural Treasures program — to create an annual pool of $10 million to significantly increase support of Connecticut’s arts community, grow jobs and diversify the state’s economy.  Rell’s plan would intercept a portion of the state’s gross receipts tax on cable television companies and create an annual pool of $10 million ($5 million in state fiscal year 2008 and growing to $10 million in state fiscal year 2009). The additional funding could be used for either operating or capital support for the state arts industry.

The Rhode Island Film Collaborative is working on becoming an officially recognized non-profit. The inaugural board is made up of 5 former RIFA and 5 PFC leaders that were actively involved in the merge of the two groups: Anthony Ambrosino, Broto Chakrabarti, Nick DelMonico, Mark Fogarty, Paul Kelly Todd LeCompte, Srey Pen, Mike Ryan, Lara Sebastian, and Daniel Lee White. For more information, visit http://www.pfcfilms.com.

Boston College hosts a screening of WTC View: A Story of New York After 9/11, followed by a Master Class with independent filmmaker and BC graduate Brian Sloan, in a conversation moderated by John Michalczyk, chair of the Boston College fine arts department. Sloan, who was an English major at Boston College, originally produced WTC View as a play. The story is based on his experiences after he placed an ad, on the night before 9/11, for a roommate for his SoHo apartment. For more information about the film, visit www.wtcview.com.

The Warner Brothers television pilot, Waterfront, was picked up for series as a mid-season replacement by the CBS Television Network. The one hour-drama series will be filmed entirely in Rhode Island, with production scheduled to begin in August. In the series, Joe Pantoliano stars as the fictitious Mayor of Providence, Jimmy Centrella. William Baldwin plays the Attorney General of Rhode Island, while Larenz Tate and Mary Stuart Masterson also star.  For more information about the news, visit http://www.film.ri.gov/waterfront.html.

The competition to woo Hollywood in New England continued.  The Vermont Film Production Grant Program, authorized by Senate Bill 165, was signed into law this summer as part of an overall economic development bill. For moviemakers, the incentive is actually a grant from the state to offset production costs. Producers spending $1 million can be reimbursed for 10 percent of local spending, capped at $1 million annually. The commission can be reached at 802-828-3618 or at www.vermontfilm.com.

Lee Rubenstein, President of Broadstreet, the international creative communications company, and founder of the Boston office, has resigned from the company he started 4 1/2 years ago. The company, formerly held by Incepta (UK), was acquired recently by Huntsworth (UK). Rubenstein cites differences with the new owners over strategy and organization, which led to an amicable parting. Rubenstein is currently reviewing other opportunities and consulting out of his Wayland, MA home. For more information, visit larubenstein@comcast.net or (617) 584-0662.

The first project from New Hampshire-based Either/Or Films, a feature-length independent film titled The Sensation of Sight, has been chosen for competition at the 2006 San Sebastian International Film Festival. The film’s world premiere on Friday, September 22nd will be the first of six screenings it will receive during the festival, which takes place September 21–30 in San Sebastian, Spain. For more information, visit www.eitherorfilms.com.

Outta Left Field Productions and Fear No Man Productions, both with offices in CT, will be filming a new feature in the state beginning on Friday, September the 8th at the Connecticut School of Broadcasting.  She’s Got It is the story of a woman in radio sales who is obsessed with her career and must ultimately make a decision to stand by her family or continue to live her self-centered lifestyle. For more information, visit www.fearnomanproductions.com/ and www.olffilms.com.

The local organization Film North will be moving into new office space provided by BEV Cam.  Film North will continue monthly screenwriters’ workshops at Montserrat College of Art, with the additional use of the college’s screening room for member presentations.  For more information, visit filmnorthreel@yahoo.com.

Don’t forget this month – Connecticut Digital Media & Motion Picture Tax Credit Informational Forums on September 14 and 19 for filmmakers and producers to learn more about the tax credits available in Connecticut.  For more information, visit http://www.cultureandtourism.org/.  And the inaugural Annual New Hampshire Film Industry Summit, presented by the New Hampshire Film and Television Office, will be held on Wednesday, September 20, 2006 from 6:30-8:30 p.m. at the State Library in Concord.