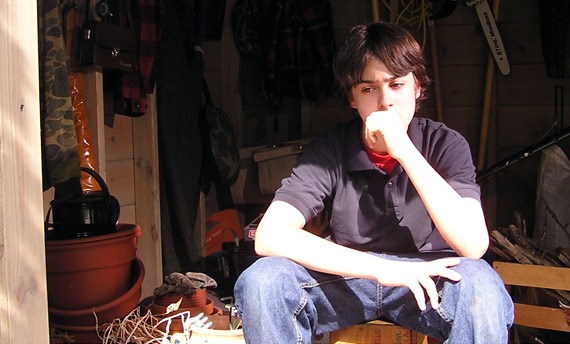 Share
After 18 years as an engineer, Todd Davis decided to change his career and went to film school at Boston University. Now he’s a filmmaker traveling the festival circuit with his short film, In the Tradition of My Family.  Next stop: Boston Film Night.

The film is a drama about a father/son relationship in a family with an unusual legacy of violence. It has won several awards including Best Narrative Short at the Philadelphia Film Festival and the Audience Award for Best Short at the D.C. Independent Film Festival. The film will be shown at the Boston Film Night on September 17th at the Regent Theatre in Arlington, MA.

Ellen Mills: How are things in CA?

Todd Davis: Hot. It’s 100 degrees and people are saying they are thankful it’s not 115.

EM: From the schedule on your website it looks like you are busy on the festival circuit.

[The film] has been getting into a lot of festivals, and I’ve gotten a few awards, which is nice. Hopefully the right people will see the film and see what I can do and want to hire me.

EM: What has the audience reaction to the film been like?

Davis: It’s interesting. The film ends abruptly and it takes a while to sink in. Someone described it as "stunned applause" when the film ends. When people can talk, they say good things about it.

Davis: It’s funny, I thought they were standard, but they’re not. I’ve done about three. One of the best questions I get is, "Is it a true story?" which I take as a compliment because I guess it’s presented so realistically that it could be true.

EM: Your film "In the Tradition of My Family" is based on a short story by the same name written by Phil LaMarche. How did you find the story and how did you decide to film it?

Davis: The story was written by my brother-in-law. It’s his first published story. Before he sent it in for publication, he let me read it. I was looking for something to shoot for my thesis film. I thought it was a really original idea and he graciously let me use it.

I adapted it for the screen. I made it more cinematic. I didn’t use everything in the story. I concentrated on the father/son relationship.

EM: That sounds like it could have been a little touchy to change the story for the film, especially when it’s a family member.

Davis: [laughs] Yeah, I sent the script to him for feedback. Actually another writer friend of his who had a story made into a film warned him that it wasn’t his story anymore. She told him that it would be completely different from the story he wrote and to just expect that. So, he had that in his mind. But he definitely noticed the changes I made. I use a voiceover narration and he especially noticed when I changed a word because he labored over each and every word.

But during the process we kind of stayed out of each other’s way. He came to one of the screenings and there was a question about the story and I said, "As a matter of fact, the writer is here." So he answered some questions.

EM: You said this film was your Master’s thesis from B.U. I noticed that wasn’t your first graduate degree. Can you tell me a bit about your background?

Davis: Yes, that’s right. I was an engineer. I have an undergraduate degree in Electrical Engineering and a Master’s Degree in Computer Engineering. I worked for 18 years in computer design and system testing.

To be honest, I got laid off from my last job. I was applying for other engineering jobs and hoping I wouldn’t get called back. That’s when I thought maybe I should look for some other type of work.

I started looking into AVID and thought they were an interesting company. I have a friend who is a film editor, he edited my film, but I called him and asked him, "Can I come down and spend a day with you at work?" At the time he was working on the television show ED. He showed me his work and how he put the footage together. I came back to my wife that night and said, "I want to go to film school."

EM: And how did she take the news?

Davis: Oh she’s been great — really supportive. She has Executive Producer credit on the film. After 5 months of being laid off I think she knew that I wasn’t that interested in finding another job in engineering. And we were able to afford it.

EM: What was it like to go back to school after being out of school for so long?

Davis: Well, I was definitely the oldest person in my classes. But I really knew why I was back in school and I was paying for it. I had to drive an hour every day and I did all the work, all the reading. Forty percent of my classmates were within two to three years of getting their undergraduate degrees. I felt different from them. I didn’t go out with them and hang out. I was better friends with the professors. In fact, I’m going to be teaching at B.U. this year. I’m teaching a digital editing course. I went in wanting to be an editor, now I’m focused on directing.

EM: What appeals to you about directing?

Davis: I have organizational skills that I learned as an engineer that transfer well to being a director. I know how to break down problems and figure out solutions quickly and cheaply. Then you add the creative side. There’s so many ways to film an idea — that’s the challenge and the fun of it. As a director I get to be creative and be managerial at the same time.

EM: What’s your working style on the set?

Davis: I’m a big believer in preparation. Every time you roll the camera, it’s money, especially when you’re shooting film, which I was. I like to be really prepped going in so I’ve got a storyboard and a shot list and I come in and hit the ground running.

EM: Are you open to improvisation on the set?

Davis: Oh yeah — on the set you have Plan A but you have to be willing and creative enough to change your plan. If I see something better or if somebody gives me an idea I’ll consider it. Some of the best moments happen that way. The harder I work, the luckier I get.

If you can make decisions quickly, that helps. You have all these people on set and you have to filter all the ideas. But it doesn’t have to be my idea. One of the things I found out in film school is that ego on a film set is counterproductive. I found the same in engineering, because everything is a collaborative effort.

EM: Why did you decide to shoot on film?

Davis: Well, it was required [for the thesis film] and I also wanted that look that you can only get with film. I hired professionals for most of the positions.

EM: Yes, I noticed that your crew list is not just a bunch of fellow grad students.

Davis: [laughs] Yeah, I didn’t have time to make a bad film at my age. I was interested in getting the best product I could get. I always intended this film to be a calling card.

EM: So how did the shoot go?

Davis: It went really well. I tried very hard to be organized and produce it like a feature film. On a typical grad student film everybody does everything. On this shoot, one person did one job and that really helped.

I was able to do just one job of director. I could just place the camera and work with the actors. We shot the film in my house. We lived on a movie set for four months, which was hard on my wife. It was stressful. We shot for five days with one day off. I couldn’t wait to get up in the morning, though. It was really hard work, very long days, but it just flew by. It cemented for me what I wanted to do.

EM: Did you edit on film?

Davis: No, nobody edits on film anymore. You use a process called telecine that digitizes the film and then you bring it to a computer and edit it.

One of the reasons I went to B.U. was that [Associate Professor of Film] Sam Kauffmann wrote the book on AVID. I wanted to be an editor when I started. My friend Michael [Berenbaum] did the first pass, then I couldn’t afford him anymore so I finished it.

I also had a video tap [on the shoot]. I would bring the tapes to my friend who’s an editor and he would look at them and see how they cut together.

Davis: Exactly. So I had those and in the end I only had to do one extra shot. That made me feel good.

Also, before we started shooting I had two big rehearsals with everybody there. I had a video camera at the first one. The DP [Cinematographer Austin de Besche] shot the second rehearsal and we viewed that. It showed us which shots worked and which didn’t. It was like video storyboarding. It helped that it was my house, too — I didn’t have to move anywhere. We had one location and we knew what we wanted to do there. We were able to do 20 set-ups a day.

EM: What was the budget for the film?

EM: Did you do any fundraising?

Davis: No, I didn’t do any fundraising, it was all self-funded. I got breaks from people I hired though. If I hadn’t it probably would have cost me much more.

EM: What are your hopes for the film?

Davis: Well, I have no expectations of getting my money back. Festivals are the only outlets for shorts. I’m really just interested in getting the film seen. It’s a classic calling card for me. It shows people what I’m capable of doing.

EM: Do you have another project in the works?

Davis: Well, at the first festival at B.U. a former student who’s a producer was invited by the department head. He had a script that he wanted me to direct. We worked long and hard, but eventually we both came to the conclusion that it just wasn’t going to work. So we have a producer and a director and a budget and we’re looking for a script- something we can do in Boston.

EM: Are you looking for a certain genre?

Davis: Something low budget. He has an idea of doing something like Napoleon Dynamite — a quirky comedy. He has a business plan and I have a creative plan.

Davis: I think I’m drawn to narratives. I really like having a script to work from. I would like to do narrative film, definitely. [Although] I wouldn’t be opposed to talking to someone about taking a job as an editor, either.