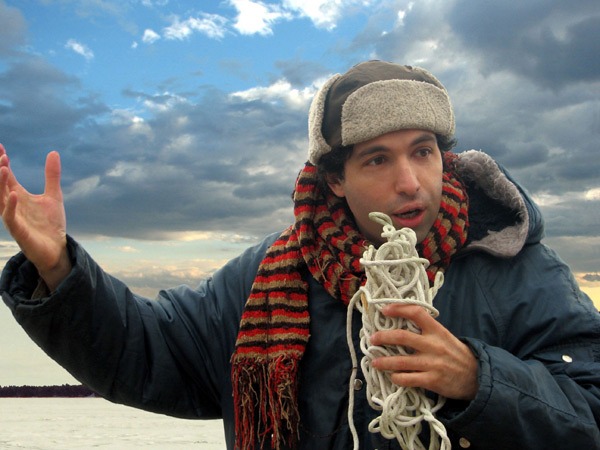 Share
Alex Karpovsky discusses his first film The Hole Story, screening at Woods Hole Film Festival this month, and how he went from making the best of a situation to making Best in Fest.

Mockumentary, documentary, fictionalized non-fiction and fictumenary. These are all genres that reviewers have used to try to describe 30-year old Alex Karpovsky’s first film, The Hole Story.

"I’m partial to the Boston Globe’s ‘fictumentary’ myself," says Karpovsky, "but usually I don’t really like to explain the film too much when talking about it. I like it just to be played out and people can see for themselves what it is rather than try to categorize it."

The reason The Hole Story has been so difficult for critics to categorize is due to the many layers of reality and fiction that the film is based upon. The film spawned from Karpovsky’s real-life pursuit of a television pilot called Provincial Puzzlers.

"The basic idea was that I was going to explore small town American mysteries. I had been trying to get the project up and running. I had sort of forgotten about it for a while and then I heard about that hole in Brainerd, Minnesota and I thought it would be perfect for the pilot episode," says Karpovsky.

The reason why this particular hole was so phenomenal lies in the fact that it opened up in the ice during the deep freeze of winter. While the other 464 lakes in the region had ice that was thick enough to drive over, North Long Lake had a half-mile hole right in the middle of it. This quickly became a national mystery making headlines with major news sources including ABC News and the Wall Street Journal. Karpovsky knew at once that this would make a sensational pilot episode for his television show. "I thought if no one is going to give me money for it I’m just going to do it myself. That’s how strongly I felt about it," he says.

So, that’s what he did. In early 2005, he hired a crew with his own money and flew them out to Brainerd only to find that the hole had closed up. But, instead of returning to Boston and his job editing karaoke videos, he decided to make the best of the situation and turn the camera on ‘himself.’

Karpovsky created an alternate meaning for the hole turning its void into a metaphor for his search for success, acceptance and the infinite abyss that is human life. He plays a character that is a fictionalized version of his real self.

"The film is very autobiographical. I played the main character and it’s pretty much who I am. It wasn’t scripted, but all of the scenes were premeditated. I knew more or less how it was going to turn out. There was an outline of a plot and a story. I would sort of direct how I wanted a scene to unfold and then have it played out on camera," Karpovsky explains.

Many critics commented on the similarities between Karpovsky’s film and an early Albert Brooks’ film titled Real Life. "The Albert Brooks film that they’re referring to is an amazing film. I think it’s very significant, funny and prophetic, mixing reality and non-reality. That was a huge influence on me," he comments. In fact Albert Brooks is one of the directors whose work Karpovsky most admires, along with Werner Herzog and Ross McElwee, both of whom critics have compared him to.

Karpovsky has no professional training in filmmaking, having majored in ethnography at Oxford University in England. Yet, he has created a unique voice in his first film that many filmmakers still struggle to establish in their third and fourth films.

"I think I pretty much found my voice with this film. I hope my voice changes, though. I hope it deepens and I’m able to keep up with it the future and continue to be sincere," he says.

The rave reviews The Hole Story received from critics earned Karpovsky a spot in Filmmaker Magazine’s much anticipated "25 New Faces of Independent Film" which will be featured in the 2006 summer issue.

Gerald Peary of the Boston Phoenix says that "Karpovsky’s movie needs a distributor." So, the big question is, can fans anticipate a theatrical release of the film?

"I don’t know for sure what were going to do with the film after the festival circuit but there are a few different things up in the air. I think, perhaps, I’d like to partner up with a sales agent and have them help me out with the distribution and we’d go from there," Karpovsky says.

One thing Karpovsky does know for sure is that audiences will definitely see a DVD release of the film. "We’ve been offered some modest distributions deals and we’re going to take one of them because we want the film to be distributed on DVD. We haven’t signed any formal paperwork yet, though," he admits.

There’s also talk of a theatrical run in England and Australia as well. "We’ve had some screenings there and, I don’t know why, but it seems to show very well in both Australia and England," he explains. "I went to school in England for a few years and studied a lot of theater and comedy and I think the film just agrees with their sense of humor. They like the dry and bleak kind of comedy which really is what this film is."

Karpovsky doesn’t have any immediate plans for future projects. "Right now I want to keep working on this film. It’s taking up a lot of time to go these festivals and generate buzz," he says. Though, he does have a concept in mind that he’d like to expand upon in the future. The idea revolves around the Ivory Billed Woodpecker — formerly thought to be extinct — that was recently found in Arkansas.

"I don’t want to act in this one, if I can help it," he says. "As long as I can find someone that I trust with it, then I will have someone else do the acting in my next film."

Now that he has a little experience under his belt, Karpovsky is looking forward to his next production. "This one will be more fun because I can focus on just doing the directing," he says. "I can spend more time shaping the film into what I want it to become. On The Hole Story, I was running around trying to get everything done."

Whatever project Karpovsky decides to take on in the future, it’s probably safe to say that he will no longer be pursuing Provincial Puzzlers.