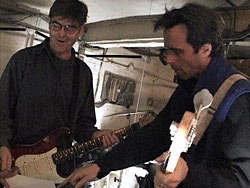 Share
A report of news & happenings in the local industry for August 2006.
Email news to news@newenglandfilm.com.

Not A Photograph: The Mission of Burma Story directed by David Kleiler, Jr. & Jeff Iwanicki has its NY premiere this month at Lincoln Center as part of Play It Lou: RockDocs 2006.  The film screens on Saturday, August 5th at 6pm and Thursday, August 10th at 9pm.  For more information, visit http://www.notaphotograph.com/.

The Rhode Island Film Festival takes place on August 8-13 with a variety of screenings, exhibits, panels and other programs.  For a full schedule visit www.RIFilmFest.org.

ScriptBiz 2006 offers a full day of interactive and informational workshops for aspiring screenwriters desiring to hone and harness their craft on August 7. Special guests include writers and directors including Hollywood filmmaker Michael Corrente (Outside Providence, Dumb & Dumber, There’s Something About Mary). This year, ScriptBizTM is thematically focused around how to build bridges; first, between New England and Hollywood and secondly, between the art and business aspects of screenwriting. For more information, visit www.film-festival.org/.

In partnership with the Third Millennium Foundation, Current TV is offering filmmakers the chance to make a difference and earn $100,000.  Between now and August 15, filmmakers can submit a video on the theme of tolerance — any form of tolerance. For more information, visit http://www.current.tv/make/vc2/sot.

The Massachusetts Legislature voted to boost state spending on arts and culture by $2.45 million. This is the Massachusetts Cultural Council’s third budget increase in as many years, bringing the agency’s state appropriation to just over $12 million. Read more: www.massculturalcouncil.org/news/pressroom/fy07budget.html  In addition, on July 13 the Massachusetts Cultural Facilities Fund was signed into law. The Fund is a landmark investment in the infrastructure of the state’s cultural resources, and the first legislation of its kind in the nation. For the full press release, see: http://www.tbf.org/About/about-L2.asp?id=3394

And this seems to be a trend.  The Connecticut Commission on Culture & Tourism announced it will award $1.8 million in matching grants to 154 non-profit organizations throughout Connecticut. This is an increase of $100,000 from Fiscal Year 2006 funding.  For a list of the organizations that received funds, visit http://www.cultureandtourism.org/cct/cwp/view.asp?A=11&Q=317424.

After nearly 20 years in Hollywood, Commercial Casting Director Jenny O’Haver has relocated her company, O’Haver & Company, to the Berkshires. During her tenure in Los Angeles, O’Haver cast hundreds of national and international commercials, as well as television shows, films, print and voice over. She most recently handled casting for Pepsi’s upcoming international commercial featuring pop star Christina Aguilera and a Coors Light commercial that featured Kid Rock.  For more information, visit www.ohaver.net.

Boston based JetPak Productions, LLC has recently completed production on their latest film project, a 30 minute short film entitled “Scotch Hill”. Directed by Michael Kuell and written by both Kuell and David Duncan (who also Executive Produced) Scotch Hill shows a few days in the life of Peter (played by David Plant) a soft spoken character who has some major decisions to make.  For more information, visit www.jetpakpro.com.

The Connecticut Commission on Culture and Tourism will host two Connecticut Digital Media & Motion Picture Tax Credit Informational Forums on September 14 and 19 for filmmakers and producers to learn more about the tax credits available in Connecticut.  For more information, visit http://www.cultureandtourism.org/.

The inaugural Annual New Hampshire Film Industry Summit, presented by the New Hampshire Film and Television Office, will be held on Wednesday, September 20, 2006 from 6:30-8:30 p.m. at the State Library in Concord. In addition to our Filmmaker Roundtables held periodically throughout the year, the Annual New Hampshire Film Industry Summit is a chance to meet up for an evening with other film-minded people in the state. The evening will feature a wrap-up of the last year and updates on the future from the Film and Television Office, words of wisdom from a keynote speaker (to be announced) and, of course, an opportunity to socialize with  industry peers.