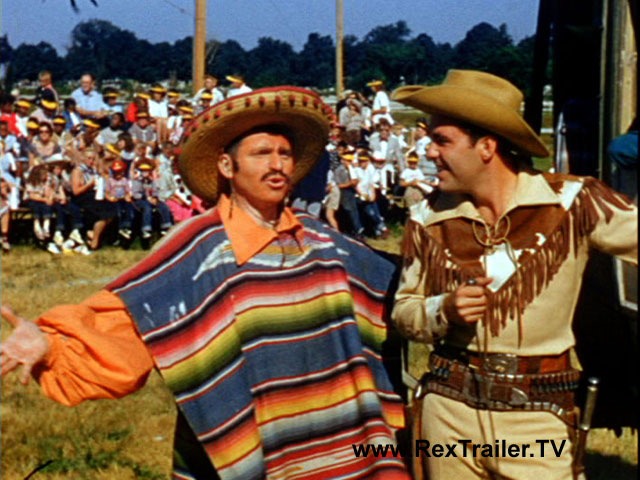 Share
In the early days of television, and for two decades after, children in New England found a hero in a cowboy named Rex Trailer. Massachusetts native Michael Bavaro’s film, Rex Trailer’s Boomtown is an affectionate portrait of the show and its star. The film screens this month at the Rhode Island Film Festival.

Filmmaker Michael Bavaro was one of those kids who watched Rex Trailer on TV, thought it was real and never forgot the memory of its magic. "I grew up in Milford, Massachusetts and Boomtown was one of my first memories," he recalls. "I really believed it was the Wild West." He credits the show with sparking his interest in film and television.

As a teenager Bavaro made Super 8 films with a camera his uncle gave him, cutting and splicing them on the kitchen table. His interest led him to study filmmaking at Fitchburg State College in Massachusetts and then eventually to move to Los Angeles where he worked in broadcast promotions and the creation of main titles.

While developing a pilot for a children’s show in 2001, Bavaro met Trailer for the first time. "Rex was being interviewed and I was in the control room," Bavaro says. "I saw him on the black and white monitor and it all came back. I flashed back to being a kid." The two men talked and became friends and Bavaro began to think about documenting the history of the show. "I thought: ‘I can get a digital camera and interview 100 fans and everyone would have a different story,’" he recalls.

He planned to intersperse the interviews with archival footage of the shows. Trailer remembers Bavaro asking him where the old tapes were. "I said, ‘What old tapes? The show was live!’"

The lack of film and tape footage was a significant challenge. Trailer says he got on TV and radio and asked people if they had home movies of the show to send them in. "Some people sent them in and Mike used them in the film."

One family sent in their movies of Trailer at several of his personal appearances and live location shows. "Another guy had home movies of when he was called up on stage to be the guy who holds the newspaper while Rex used the bull whip," Bavaro says. The man wanted to shoot his interview on his boat in Boston Harbor. "I said, ‘Don’t tell me anything until we get out there!’ We rowed out there and he started telling the story and he got so excited, it’s like he was a kid again. Then when I saw the footage, it matched up perfectly." In some of the donated footage, the filmmaker even spotted his sister on a field trip to see the show with her Brownie troop.

Bavaro says Trailer’s basement became known as "the goldmine" and more than once yielded audio visual treasures. "It was like an archeological dig," the producer says. "One day he brought up an old reel and part had sound and some of it had no sound. I asked him what he did when there was no sound and he said he would just narrate for the kids. Anyway, on E-bay a few nights later I saw a bootleg copy of "Rex Trailer’s Ranch House" for sale. I bought it and it turned out to be one of his original kinescopes and it had that same old reel on it with all of the sync sound."

To fund the film, Bavaro found an investor early in the process, but the deal fell through when the economy took a downturn. "I had already committed, so I just went ahead. I knew I could do it, it might be a ‘garage film’, but that would be okay."

Bavaro worked on the film for two and a half years and had some 60 hours of footage to cut. He says that filmmaking for him came full circle with this film. From his mother’s kitchen table to his desktop; from cut and splice to drag and drop; he was back to shooting and editing himself. He shot on miniDV, sometimes with help, but often alone, and edited using Final Cut Pro on a Mac G4. He describes the look of the film as "a big home movie, but stylized."

In the end, two local businesses, DePrisco Jewelers and car dealer Ernie Boch, Jr. stepped forward to help with financing the film. "Donna DePrisco’s first job was on Boomtown, Bavaro says. Both she and Boch, who appeared on the show as a child, share their memories in the film. They are joined by many others with special memories, including well-known personalities Jay Leno, Steven Wright and Jimmy Tingle.

"Jimmy Tingle was one of the first to do it," Bavaro relates. "I thought it would help me get other people if I could say that Jimmy did this, but I never had to. Basically, no one said no." He often used his professional network of contacts to ask for interviews, but says that even people he called cold said that they would participate.

Last month at Jimmy Tingle’s theatre in Somerville, Masssachusetts, Bavaro hosted a screening of the film and a 50th reunion of the cast of the show. Trailer says it was the "biggest thrill" of all the screenings thus far. "The crowd reaction was unbelievable to it." Bavaro agrees, "These were the true fans — the die hards. It was great!"

Trailer, who owns his own production company and teaches television production at Emerson College, sums up the finished film in one word: "fantastic." Asked if he had ever considered a similar project himself he shakes his head. "It never occurred to me. We were on air for 20 years, that was pretty much it." He admired Bavaro’s commitment to the project. "Nothing stood in his way," Trailer says. "He found out Jay Leno was a fan of the show and he hopped on a plane and went to California and interviewed Jay Leno. He made it a hit. He’s a remarkable guy, very talented."

Bavaro admits that, "Once I start something I don’t give up." He agrees that Trailer would never have done the film himself, despite his professional expertise. "He’s a humble guy. He doesn’t like to blow his own horn."

The project Bavaro once thought might be "a garage film" has turned out to be much more than that. "It’s about the show, but also about the lure of it and the mystique. It is exactly what I had hoped when I started out."

Judging by the enthusiastic audiences at film festivals and screenings, as well as the growing number of DVD sales, legions of "baby boom-towners" are happy to follow Bavaro down the memory trail to Boomtown.