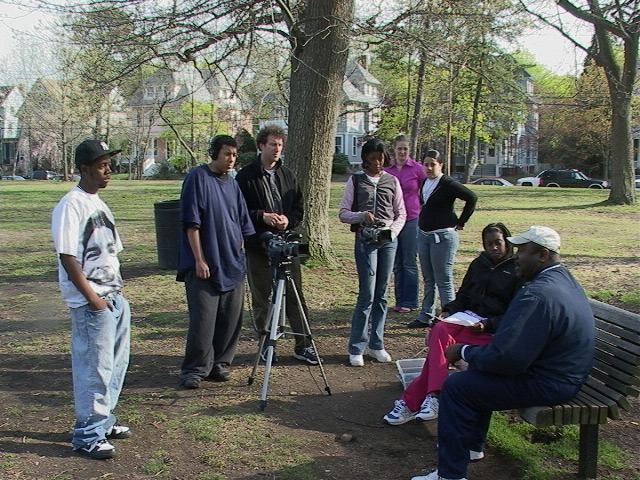 Share
New Haven teenagers find power behind the lens as they try to change socio-economic conditions in their community through documentary films through Youth Rights Media.

With a video camera, some editing equipment and a lot of talent, teenagers in New Haven, Connecticut are discovering the true power of filmmaking and are taking on profound yet controversial issues in their community.

Youth Rights Media (YRM) was founded by Laura McCargar in 2002. Since then, hundreds of youth have been reached by the center. Its mission is to empower youths by allowing them to produce and distribute videos which educate the media and the public on issues confronting them. But it also allows these filmmakers to become community leaders and call attention to the topics highlighted in their films. The films are also used to educate their peers and train police officers. The filmmakers become a voice for their community and political advocates. At the YRM center, there is a media lab and additional programs to train teenagers on youth rights, peer education, and youth organizing.

"Most films are like fiction. But the ones we do are real life experiences. It opened my eyes to some of the stuff I wasn’t thinking about before. You’re learning new things in the process as far as the school system, juvenile justice system and the community as a whole," said 16-year old New Haven filmmaker Ashley Burney. "I never really thought about filmmaking — so until my sister told me they make documentaries and stuff at YRM, I thought that would be interesting. You never think that you would be able to do that."

All of the films produced at YRM have had public screenings at local New Haven theaters. They have also screened nationwide. Select films were broadcasted nationally on cable access channels and chosen for entry into national film festivals like the Media That Matters Film Festival. They are also available on DVD and sold on the Youth Rights Media website (www.youthrightsmedia.org). All of the money raised goes back into supporting the programs.

Local political leaders are quickly recognizing the power behind these teenagers with cameras. In 2004, youth at YRM made a groundbreaking documentary, CTJ$: At What Cost profiling the Connecticut Juvenile Training School. The film helped spark the closing of the facility and highlighted the treatment and punishments of youth incarcerated there.

"I’m not a filmmaker myself but what really drew me into the work was an interest in education, specifically alternative education, by engaging kids in learning and thinking about topics that may be too controversial for school but are strongly impacting the daily lives of youth," said Laura McCargar, executive director of YRM.

The latest film just completed by the teenagers at YRM is called, Nevah Wen, or New Haven spelled backwards. This film is a reflection on this American city and discusses the various socio-economic issues occurring in the area.

Burney, a youth organizer at YRM, worked on this film as well. "After you show the film, it’s like we did that. It’s a good feeling after you see the finished product.

Burney wants to be a pediatrician. However, she says the skills she has learned at the center will be extremely beneficial to her in the future. "I want to keep working with YRM even after I graduate so I can help. The program in itself helps me with public speaking and how to speak to older people. But this program is important for other youth who could go on the wrong path without any guidance. I think the program is good for youth because it shows that there is another path other than the street and stuff like that. It is something positive. There aren’t a lot of resources in New Haven for the youth."

Since joining the program, Burney has helped write, edit, shoot, and produce films like Book’Em, a film highlighting the rules and regulations schools implement that the kids believe lead teenagers from school into the prison system.

Karl Gray Jr. an 18-year old from New Haven has dreamed of being an actor. He joined Youth Rights Media almost four years ago. He said by coming to the center, he has learned critical techniques in front of and behind the camera. "I still want to be an actor. But I also realize I can’t do one without understanding how to do the other stuff. I can act but now I can direct my own pieces and still be an actor and get my vision out to the people the way I want to."

This year, Gray created his own documentary on a trip he had taken to various southern states. There he made a film on the civil rights movement and the impact the movement had on these targeted states. "I recorded the entire trip and when I returned, I put it together. I used this as a fundraising mechanism to go to Cuba. I showed the trailer to a group of people and it raised $1,000."

This money was used to help fund his trip to Cuba, where he studied historical and religious events. Gray is currently in post-production on this film.

Gray says his film role model is John Singleton. However, he hopes when he heads to college, he can help become a role model for others at YRM and guide others towards a path in filmmaking.

Youth Rights Media uses state of the art equipment like Final Cut Express, Sony VX cameras and Apple Power Mac G4 computers. "I always wanted to be in the film industry. I knew I was going to do this. But Youth Rights Media helped me use equipment I would never be able to use. I produce my own films on the editing equipment here. They’ve helped me a lot," said Gray, a lead youth producer. "I do just about everything from sound to editing to directing — every aspect of filmmaking. I know more than just sitting down at the computer in terms of putting the film together."

Gray was accepted into Clark Atlanta University. He is taking a year off to raise money to pay for school but will continue to make films.

The center is run on limited funds through grants and sponsors. YRM is always looking for filmmakers and media professionals to volunteer their time to help run sessions.

McCargar says giving students like Gray and Burney simple tools can help them discover their talents. "The program has helped open their eyes and give them a voice. It has also given them a feeling of power and freedom that many have carried on after the program."

And who knows, the next John Singleton or Alfonso Cuaron could be shaping his talents as we speak at YRM.