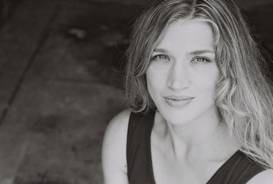 Share
Arlington native Julia Radochia explores break-ups and make-ups in her collection of short narrative films, one of which screens at the Plymouth Independent Film Festival this month.

Julia Radochia takes the elevator down 22 floors. She finds a lobby corner with decent cell reception and starts talking about her brief but prolific tenure as writer, director and editor for her playfully named House of Hugs Productions. It’s fitting that her day job in software quality assurance looms overhead, stuck in the LA clouds. Her office is full of people who’d rather be making films. At least half of them are actors or musicians or filmmakers, she explains.

She’s tried other things — acting, living in New York. But in 27 months she turns forty, and she wants to live off something she loves. While her office mates were staring through windows that don’t open, wishing for what could be, Radochia finished six shorts in three years. She licked the stamps and dropped tapes in the mail for at least 100 film festivals. Five screen her shorts this July.

Erin Trahan: You have several New England screenings lined up for summer, including the Marblehead Film Festival (Like His Father, Jimmy’s House of Hugs), the Plymouth Independent Film Festival and the Hovey Summer Arts Festival (Eddie’s Winning Date). Will you be able to attend?

Julia Radochia: Well, the Broad Humor Film Festival is this Saturday in Venice so I can’t make Marblehead but I am coming back for Plymouth. It’s sort of wow, in July I have five festivals! I find it interesting that they are all so different.

ET: This is your second year in Plymouth, right? How would you describe the atmosphere of these festivals? How do they compare?

Radochia: The Marblehead Festival has all sorts of arts going on. People don’t necessarily know it as a film festival, so my films may actually get a bigger crowd, which is nice. Hovey, too, has both plays and films. Plymouth is a serious film festival. Last year was their first year and it ended up being way bigger than they thought it would be. The PR person, Grace Rudolph, was always so sweet and so nice, and responsive to my emails. I felt taken care of, like they were genuinely interested in my film. All of it feels like a homecoming before I get home.

ET: Rumor has it you are moving back to New England. What will be the biggest adjustment?

It will be an adjustment to have my father wanting to check my car all the time, or making sure I have change. Sometimes you don’t feel like you’ve become an adult, but he’s a good dad who’s just being protective. It’s such a different lifestyle being around family all the time. With all my cousins and uncles and aunts, there will be a lot going on. I’ll see more of my new nephew. That and weather and not being around industry people all the time.

A still from Sally’s Dream House.
[Click to enlarge]

ET: After watching the (near) complete works of Julia Radochia, some themes started to emerge: houses, hugs, humor, and deceitful men. Does this sound about right?

Radochia: That’s funny! Sally’s Dream House was less about who Raymond was or even who Jeff was. Sally was going after a house that wasn’t available, a man who wasn’t available, not that she has to end up with another guy, but he wasn’t into her. She really wasn’t paying attention to all the clues. Of course Jimmy [from Jimmy’s House of Hugs — about a hugging bordello for women] and Eddie [from Eddie’s Winning Date — about a man who loses a bet and must apologize to all the women he dumped] are both players in a different way. With them, something happens to make them realize that things could be better.

ET: I really liked your use of music throughout. Were the songs in Eddie’s Winning Date original?

Radochia: Sally’s Dream House is all Bryan Ferry, which is copyrighted. For Eddie’s I really wanted everything to be ours. My boyfriend Jeremy Ward did everything you hear, from recording sound through helicopters and people rummaging through the trash to writing and performing songs in his garage. I wasn’t sure if he’d have time so I had a whole rough cut to ELO and Matthew Sweet. He had the challenge of coming up with something that cut with the movement of the camera and could flow as well.

ET: Your first three shorts feel like films made in Southern California. The exterior scenes have wide streets, old cars, Six Feet Under-type neighborhoods; the actors are polished and better looking than the average person. But Eddie’s Winning Date has a New England feel that runs deeper than the Super Bowl highlights or Patriots hats and T-shirts. Did you have a "look" in mind when casting?

Radochia: I definitely wanted Eddie and the couple to seem like New Englanders. The couple is based on a couple I know and the dialogue is taken from a conversation I could imagine them having. There’s a way New Englanders talk, with a faster pace. It’s not just the accent. I did have a few Bostonian actors try out, but none had the energy I wanted. For Mike, I ended up casting a guy from the South; you can hear he has a bit of a Southern accent. I figured he could be someone who married someone from New England and became a Patriots fan. The woman who played his wife was cute without looking too plastic. More real and natural. Part of how I cast too, is by the chemistry between people, couples especially. It made me understand how casting people is really to fit a vision rather than ‘Oh no, I don’t like this person.’

ET: You’ve tried acting in LA, too. What was your take from an actor’s point of view?

Radochia: I got stuff right away when I came out, some student films, a couple of plays, a music video. I got my SAG card. Things were going well and then things just kind of slowed down. For a lot of actors, as you get older, you want more control over your life. It’s tough relying on someone else to pick you all the time. One thing I noticed: I moved out at the same time as a lot of guys and the guys have all done better; there’s fewer men acting and more roles for them. Another thing that surprised me was they really want to see you’ve had a lot of training or that you’re always in class. I’d take a workshop here or there but I hated all the screwing with your mind exercises.

ET: So you started making your own films?

Radochia: In 1999, I thought maybe I’ll get into editing. I’ve got the computer background. I took a weekend intensive class in Avid but nothing really came of it. Then I decided to go to film school at LA City College. I started school the week before 9/11. And you feel guilty, you know. I thought I should be out doing something to help people in some way, that I’m not supposed to be pursuing my dream. But I put all my effort into it and decided I just have to do my best. So many people want to be filmmakers, you have to work hard and be competitive. I think that’s the case with anything creative.