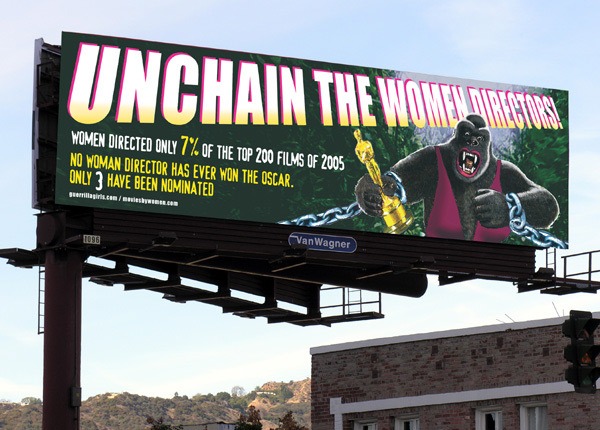 Share
The Guerilla Girls work to oust sexism and racism from film, art, you name it.

For years one of Boston’s most recognizable examples of guerilla art hung over the nasty westbound S-curve on Storrow Drive. Stealth Red Sox fans spray-painted the official "Reverse Curve" sign to read "Reverse the Curse." Innocuous and funny, the sign stayed up until, well, it worked. Guerilla art can do that: reappoint traffic signs, turn iconic images into unexpected billboards, or post shocking statistics on bathroom stall doors. It can change what people know, what they think, and how they behave.

Gurus of such tactics, the anonymous feminist collective known as the Guerilla Girls, have been changing minds about gender, race, and art since 1985. They’ve sent secret letters to particularly sexist gallery owners and art critics, bestowing honors such as "The Most Patronizing Art Review" or "The Norman Mailer Award for Sensitivity to Issues of Gender Equality." They’ve infiltrated art hierarchies with spot-on stickers, postcards, and ads that fearlessly name names and wag fingers at the most white male-centric curators and institutions. In public they wear gorilla masks and answer to the names of often under recognized dead female artists. In private, they go about their other lives as artists who witness all that has and hasn’t changed about whose art or whose film gets the recognition it deserves.

Two founding members known as Frida Kahlo and Kathe Kollwitz respectively will perform at the Brattle Theatre on June 4th in a benefit for the Boston Women’s Fund. No doubt they will cover what are now Guerilla Girl classics, among them: "Do women have to be naked to get in to the Metropolitan Museum of Art? Less than 5% of the artists in the Modern Art sections are women, but 85% of the nudes are female." This statement and the image of a gorilla-masked nude (a re-tooling of Ingres’ Odalisque) ran on the sides of New York buses in 1989. The poster made the cut for a 2005 Guerilla Girl exhibition at the Venice Biennale. Why? Because a recount in 2004 found a few less women than 15 years prior.

A less resilient group might throw in their masks, but not these Girls. They report inroads and, yes, success stories, particularly in the art world. Frida Kahlo says, "When we started there was still the thorny question of quality," as in women artists are simply not as good as men. "Thank god everyone realizes that’s not the issue anymore." Major shows and retrospectives wouldn’t dare exclude women or artists of color altogether as they had in the 1980s. She cites a recent surge of interest within Europe, with Guerilla Girl exhibitions and installations at London’s Tate Modern, the Istanbul Modern, two shows in Spain, one in Greece, and a presentation in Warsaw. "Somehow Europe needs us or wants us," says Kahlo.

But Hollywood and American film culture are less desperate for feminism and the equity it advances, which is why the Guerilla Girls have made it a priority to keep the movie elite on their toes. The stats are telling: no woman has ever won an Oscar for best director; only three have been nominated. According to an annual study conducted by researcher Martha Lauzen, "Twenty one percent of the films released in 2004 employed no women directors, executive producers, producers, writers, cinematographers, or editors." So Guerrilla Girl billboards welcome Oscar guests with zingers like 2003’s Trent L’Ottscar, "Even the US Senate is More Progressive than Hollywood!" or 2002’s Anatomically Correct Oscar, "He’s white and male, just like the guys who win!" For an industry that claims creativity as its domain, it certainly comes up short for ways to change the situation. Kathe Kollwitz recounts a conversation with a television producer, "He said, ‘what do you expect me to do, hire women because they are women?’ The answer is yeah, there’s no lack of women out there but there is a lack of people willing to give them a chance."

The problem is not just about who hires whom, but also what films get screen time. Even the independent festival system, presumably more fair, is not necessarily more hospitable to women filmmakers or filmmakers of color. Sundance has been a past Guerilla Girls target and Kollwitz reports receiving lots of letters about the Tribeca Film Festival. Even the homegrown Independent Film Festival of Boston has an overwhelmingly male docket: Only 13 of the 93 directors featured at the IFF in 2006 were women.

"I am researching film festivals all the time," says Cristina Cacioppo, who doubles as programming assistant for the Boston Jewish Film Festival and the program administrator for Women in Film & Video/New England. "I see tons of films by women that sound so interesting but don’t make it here. It’s still not balanced," she says. She notes that woman-directed films do not guarantee feminist storylines or imagery. She believes women directors need more venues for their work, regardless of content.

One challenge for feminists, says Kollwitz, is overcoming a great societal will that pretends everything is ok. "Everyone wants to sweep [feminism] under the rug. There’s this sense that, ok, now that’s done, great," she says. And unlike the art world, where a very small group of wealthy collectors can write the collectivist history for what is made accessible to a broad audience, everyone who buys a movie ticket casts a vote. "We are always astounded at how films don’t really represent the interests of the people buying the tickets. The women in films are all young and gorgeous. Where are the women in middle age? Where are the people of color? We would like to even it out a bit," says Kahlo.