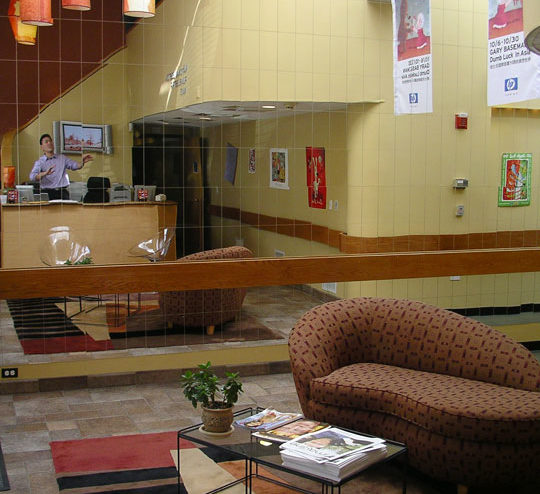 Tucked behind the sprawling Charles River campus of Boston University in an unassuming strip of office buildings is the 22,000 square foot facility that houses National Boston: National Boston is New England’s premiere design, motion graphics, high and standard definition television resource. The company was founded in the early 1990s by Tom Sprague to provide corporations, broadcast networks, advertising agencies, and filmmakers the ability to extend their brands and films across the nation and the world.

Kathy O’Toole, National Boston’s general manager, likes to emphasize National Boston’s flexibility in a fast-paced, ever-changing media world. "Our employees wear many different hats," she explains. "It’s not like in years past when a smoke artist was only a smoke artist. Today’s technological landscape calls for people with multi-faceted skills and backgrounds, and many on our staff can bounce from visual effects to music to editing with ease."

National Boston can boast that it’s the only company in the immediate Boston area with the highly coveted Thompson Telecine, also known as ‘The Shadow.’ The Shadow Telecine is capable of transferring a negative or positive 35mm, 16mm, or Super 16mm print to multiple videotape resolutions, including high definition. The system also features the latest 2K CCD technology, a Carl Zeiss illumination system for state of the art picture reproduction, and the Pogle Color Corrector. All told, this technology makes National Boston’s telecine "the finest system available in New England."

It is this kind of equipment, along with a wide range of other services, that has attracted many high-profile clients and projects to National Boston. Ben Affleck recently began production of the film version of Dennis Lehane’s novel Gone, Baby, Gone. Affleck found himself at National Boston using the sound stage to do camera, wardrobe, and makeup testing — not to mention National Boston’s billiard room and lounge where clients can relax and have a little fun after long hours of work. 2005’s Red Sox romantic comedy Fever Pitch also availed itself of National Boston’s sound stage to do camera testing, and 20th Century Fox hired Rumblestrip to record actress JoJo Levesque’s DVD commentary for the teen comedy Aquamarine.

But it’s not only Hollywood that National Boston hopes to woo. Kathy O’Toole is also a board member of the Massachusetts Production Coalition and an eager supporter of the tax incentive legislation that was signed into law this past January. The new measures provide tax incentives to any production that spends over $250,000 as part of a film project in Massachusetts. O’Toole hopes that the legislation will encourage more independent productions to consider Massachusetts, and she wants to reach out to those folks.

"In the past," she states, "there was the perception that National Boston didn’t work with independents or that they couldn’t afford to work with us. We’re approaching independent filmmakers as well as students and offering discounted rates and services because we believe in the importance of supporting local filmmaking and media production."

It is in this vein that O’Toole recently hired Laura Yellen to come aboard at National Boston as New Business Development Director. Yellen, formerly of the Massachusetts Film Bureau, brings years of experience working with the local and national film community to National Boston. "I made a tremendous number of contacts and formed many relationships with filmmakers having worked for the MFB," Yellen states. "I was hired by National Boston to be a liaison to the film community, to advertise the company’s capabilities in helping take raw materials and turning them into screen magic."

One recent client of National Boston from the local (and independent) community was Glenn Cooper of Lascaux Pictures. Cooper’s Lascaux Pictures completed its first feature film, titled Long Distance, in 2005 and needed to transfer the film to a variety of other viewing formats for distribution. This can often be a costly procedure, but National Boston offered Cooper an affordable package to help him accomplish the task—and ultimately speed up the process of getting his film to the public.

Laura Yellen enthusiastically asks, "What’s your budget? Where can we meet in terms of dollars and cents to win you as a client while not overburdening your spending limits? The New England film community is tight-knit, and we want all kinds of business — from high-end mainstream films right down to student productions — and we’ll do what we can to help everyone because we know that a satisfied (and local) customer will recommend us to friends and colleagues."

As one of the newest members of the National Boston team, Yellen is also effusive about the company ethos and climate. "National Boston is a creative and fun place to work," she says. "A team oriented company, our employees thrive on brainstorming ideas with each other. Our clients are number one, and we are strongly committed to providing unparalleled customer relations. We realized from the beginning that being a ‘creative business’ meant we had to have creative people — not just hiring A-List talent but also growing and nurturing talent from within. This has helped create an atmosphere conducive to solving unique problems with creative and innovative answers."

National Boston has also shown its support for the local filmmaking scene by becoming a sponsor and participant in such film festivals as The Independent Film Festival of Boston, The Woods Hole Film Festival, and The Nantucket Film Festival. National Boston also periodically sponsors art shows in which both local and nationally-recognized artists display their work and speak with the public.

National Boston expects to grow rapidly in the coming years — side by side with the growth of the local film community as the tax incentive laws come into full flower. "Our growth will require us to add more staff and utilize more outside Services," O’Toole explains. "If our creative ideas can promote more shooting of film, we can

help grow the local film lab while keeping our own telecine active. Any business growth will help stimulate the local economy as long as that business buys locally. Boston is a great city, and National Boston is committed to helping keep as much business in our own back yard as possible. We believe what goes around comes around."

National Boston may be a hidden jewel for the moment, but as its track record mounts and its business expands, the hidden jewel should soon become a conspicuous, sparkling gem.