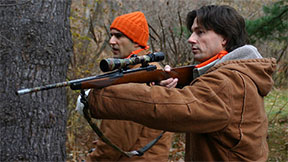 Making It, Out of the Woods

Share
Vermont native, Samuel Dowe-Sandes, talks about life in Los Angeles, directing his first film, and why he keeps finding his way back home.  His film Out of the Woods screens at the Tribeca Film Festival in May.

Twenty-five years ago, Samuel Dowe-Sandes was confined to a small desk at the Williamsville, Vermont elementary school daydreaming about becoming a filmmaker. Today, he sits at his small desk at his home in Los Angeles anticipating the premiere of his first film, Out of the Woods, a 20 minute short that will make its debut this May at the Tribeca Film Festival in New York City.

"I hope it goes smoothly. I mean, I’ve already made it so there’s nothing for me to be nervous about because there’s nothing I can really do. It’s just going to be exciting to see it on a big screen with a fresh audience," he says.

Dowe-Sandes wrote and directed the film which stars Len Cordova, J. Scott Shonka and Keli Daniels. It tells the story of three good friends who are on a hunting trip in the woods of Vermont when they are forced to confront a tragedy. "There’s a pretty big twist at the end so it’s hard to describe in a lot of detail without giving too much away," he explains.

Dowe-Sandes majored in American Studies and Screenwriting at Marlboro College. After graduating, he moved out to Los Angeles to fulfill his dream. He eventually ended up as the development executive for acclaimed producer, Robert Evans, who is most famous for Chinatown, Marathon Man and more recently, How to Lose a Guy in 10 Days.

"I love LA. Out here, it is a serious business and it’s really hard. There are a lot of people who want to be filmmakers so it’s a competitive business. But, there are so many resources and you’re always around people that are passionate about it. Sometimes people take themselves too seriously perhaps, but there is a great filmmaking community with everything from features to experimental to independent."

But, when it came time to make his first film, he was determined to differentiate it from all the other films coming out of Los Angeles while at the same time staying true to his roots in New England.

In February of 2005, Dowe-Sandes began holding the auditions for Out of the Woods in Los Angeles. Two weeks later he had a solid cast and was ready to fly across the country to Vermont for filming, which was no easy feat. "A couple times I almost just gave up on the project because people were telling me that it wasn’t practical to shoot it in Vermont. That I should just shoot it on set in LA and make it look like Vermont but you really just can’t get LA to look like Vermont. It wouldn’t work."

After a week of rehearsals, a pooling of funds and much convincing, Dowe-Sandes flew the Los Angeles cast and crew to his hometown to begin filming. The remaining crew positions were filled locally through the Vermont Film Commission. Students from his alma mater, Marlboro College, were recruited to help work on the film as well. He also rented all of his gear locally. "We got our equipment out of Boston from Boston Camera. We used a Panasonic SDX900 which is a pretty high end camera. And we got our grip and electric pack from Kaye in Boston."

The filming took a total of four days and was shot at three separate locations. "The first shoot was in Brattleboro at the Brattleboro Food Co-op. Our second location was in Putney at Santa’s Land USA which is almost like an amusement park. They actually have domesticated deer there that we used in the film. Our last location was actually in Williamsville at my parents’ house." He laughs, "We had to send them off to New York for the actual filming just to get them away because they would have been freaked out by the wear and tear on the house during filming." But, Dowe-Sandes made sure to repay their kindness with a cameo in the film. "If you look at the background during the scene at the grocery store, my parents are actually some of the extras we used as shoppers."

Seven days later, the cast and crew were on their way back to Los Angeles for post production where Denise Howard edited the film on Final Cut Pro and used Adobe After Effects for color correction. Almost a year later, in April 2006, the film was ready for the festival circuit.

So far, Out of the Woods has shown at the widely acclaimed Aspen Shortsfest in Aspen, Colorado. The Shortsfest is one of the few festivals worldwide to be recognized by the Academy of Motion Picture Arts and Sciences as able to send its top prizewinners to compete for the Oscars.

At Tribeca, Out of the Woods will show in the Shorts in Competition-Programs category where the shorts are grouped together by theme. Dowe-Sandes’ film will be shown in the program titled For Better or Worse, where "the bonds of marriage, friendship, and family are put to the test." It will show with the six other films in that program, including Melissa Joan Hart’s Mute.

"After Tribeca we’re just going to finish sending it out to other film festivals. Since I live in LA I’ve been lucky enough to have meetings with some film companies and managers," says Dowe-Sandes. "I would love to take the film to Vermont for a showing."

In the meantime, he isn’t wasting any time getting started on his next film. "I’m working on a couple of feature scripts that I’m excited about. It’s a big difference jumping from a short film to a feature. It’s going to be a long road in terms of trying to find financing."

With Out of the Woods, Dowe-Sandes has found that rare middle ground between his small town and his big dreams. It’s a formula that works and he’s going to stick with it.

New England has not seen the last of him. The script he’s currently working on is partially set in Maine. "I’m excited to shoot more films in New England and continue to bring cast from LA to work with the local people. I think the students and the people from the area learned a lot working with us and we all really enjoyed ourselves."