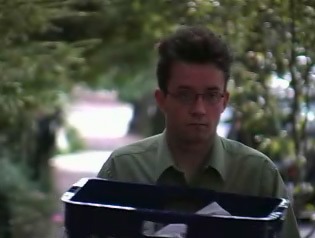 To New Hampshire and Back Again

Share
At the ripe age of 24, Jeremy Cleek makes his feature debut with Up and Down Again.

What’s with kids these days? They get their college degree, head into the world and feel their meaning drain with each day on the job. So, on the weekends they write, direct, and star in their first feature film? Maybe there’s something to the "quarter-life crisis" especially if it gets filmmakers like 24-year-old Jeremy Cleek up from his desk and behind a camera, where his instincts come alive.  NewEnglandFilm.com took time to learn about his film Up and Down Again about a 20-something main character who returns to his childhood home in New Hampshire.

Erin Trahan: How did you know you wanted to make films?

Jeremy Cleek: I started high school as a goof ball, but I needed something to keep me grounded and focused. I explored video production, mostly imitating Saturday Night Live sketches. I wrote my first short, never filmed it, wrote another one and wasn’t very happy with it. I just kept trying. Somewhere in there I became very serious.

ET: In Up and Down Again, the story takes place in New Hampshire. Is that where you grew up?

Cleek: My father was in the military. I lived in a few different areas. I lived in Georgia for 10 years and right after eighth grade, we moved to Londonderry, where we stayed through [my] high school. I went to film school in Vancouver, came back to New Hampshire in 2002 and made a couple of short films. I also helped people out on their shorts; most of it has been volunteer work.

Cleek: I install video equipment for public access stations and municipalities. There’s a lot of work. Access centers are all upgrading, mostly piece by piece. Playback, studios, edit suites, and dub systems. We just did a job at Emerson. A couple of weeks ago we were down on Martha’s Vineyard.

ET: What is your film about?

Cleek: It’s a simple plot: a guy in his mid-twenties has been living in Boston for several years and he needs a getaway weekend. It’s really desolate. He runs into his old neighbor and that puts everything into perspective for him. He sees that he needs to repair his relationship with his brother and that he got lost in the process of becoming what he wants to become.

ET: I just saw Junebug. There are similar themes, like the return home, estranged brothers, and the conflict between urban and rural life.

Cleek: Junebug is much more controlled. But like Up and Down Again, if people want to know what it’s about, the plot is simple and difficult to summarize. It’s all in the interactions. Have you seen the new film by Andrew Bujalski?  His movies are similar to the movies I enjoy, and what I hope I’m achieving.

ET: He did Funny Ha Ha, right? In many ways you two are peers. Have you watched or read anything that influenced this story?

Cleek: In the last few years I got into the films of John Cassavetes and Mike Leigh, films that really opened my eyes. Especially Naked by Mike Leigh. To see characters acting so real, and situations so personal, that’s something I had never seen before. One of my short films in school was a supernatural thriller. I went from that style to finding this. This is what I wanted to do the whole time I just didn’t know it was possible.

ET: How did the story develop? Did you write it? How close did you stay to the script?

Cleek: I wrote the script, which was really plot driven. I was trying to show how different someone could become after living far away from home. I wanted to compare big city and small town life. Most of it was shot in Summer 2004, then in May 2005 we had a test screening. I showed it to a couple of close friends and associates in New York, filmmakers as well. I had cut it to the screenplay, but we found there was something more interesting in the story we should explore. So we spent from May until now re-shooting. The first cut was one hour and 45 minutes. Now it’s down to 85. It feels like a completely different movie. Everyone has been involved in the process of reshaping.

ET: Who is everyone?

Cleek: The whole way through it’s been my wife and I and a very small crew. My wife, Amber Ward, did all the camera operation. Myself and a close friend worked out the story structure. The initial cut was more of an assemble edit between myself and my wife. From there I refined it, got it down to a fine cut, and then it’s been just me exclusively working on edit and sound design.

ET: Do you like being the guy who does everything? Will you write, direct, edit, and act in your next project?

Cleek: I would’ve liked it more if I didn’t have to record sound, too. I was holding a boom the whole time! I was always looking to make sure the boom wasn’t in the frame, checking out the levels. I enjoyed the scenes a lot where I was actually in the scene. I felt closely connected to it; instead of it being me the director, the director was gone. I got to do whatever I wanted to do.

I’ll write, direct, and play a minor character in the next project as well. But I have someone else on board to produce and we’re going to have crew. I’ll be able to enjoy the process from a director’s standpoint: to sit down and watch the monitor, watch the actors, and only focus on that. It’s called Trials and it’s about a complex relationship between three people.

ET: You must have your own equipment.

Cleek: Yeah, we used a Canon GL-2 and I have a G5 with Final Cut for editing. We are pretty self-sufficient between the two of us and some other close friends. My brother Ben Cleek does the music; I think this is his third or fourth film.

ET: I especially liked the music over the end credits. What instrument is that?

Cleek: We wanted the music to be minimal in the movie, to bridge from one idea to the next. We focused first on getting the intro music done, and based the rest of the music off of that. Ben gave me five completely different ideas for the opening, with different instrumentation, etc. We finally decided on a wood percussive instrument, like a marimba. In the intro those come out more prominent, then they grow into the marimbas that are deeper and more mature. We wanted to find a feeling for the scenes with Jim living in Boston and something different for New Hampshire, or Mark’s theme. The way the ending music comes about is based on ideas from the beginning but a little more grown up.

ET: Speaking of growing up, why does Jim return home? And why does he need to do it alone?

Cleek: Sometimes you get something that builds up inside of you and then you just have to do it. He had his mind set on it. It wasn’t an option to not go and it wasn’t an option to bring his brother. I like the kind of films where you’re not told exactly what to think or how to feel. I left a lot of blanks for people to fill in.

Cleek: That’s the part that just sort of happened, it was never the intent of the original movie. It was a guy battling his internal problems — not dealing with his relationships or rekindling with anyone. That’s where we saw potential so we pushed it and made the movie about relationships instead. I don’t know why there aren’t more movies like that.

I have a strong relationship with my brother, but with me living in New Hampshire and him in Boston, it’s hard to simply hang out. And my good friend living in New York City? Same thing. My father, well, it’s just not the same father-son thing it was when I was little. Being married isn’t necessarily restrictive. It just makes the other relationships different. But I think because those male relationships were there before, the deprivation of them now leaves my subconscious yearning for that. It’s something I didn’t really know was there until we made this movie.

ET: In your director’s statement you said that it’s an absolute waste of time making a movie about something you already understand. How else did making this film change you?

Cleek: I felt when I was editing that I had to cut just the way screenplay was written. But now I haven’t gone back to the screenplay. When I did the test screening, I just wanted the project to be done. But going through the questions with everyone gave me a new perspective. To find out then that I’d be spending another year on this? Three years ago I wouldn’t have been able to do that.