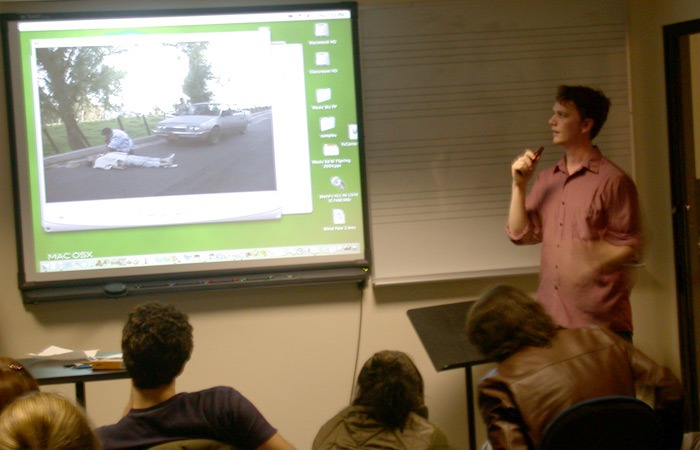 Share
Ricardo Poza from the Berklee School of Music Learning Center talks about the Film Scoring Contest taking place this month and what's in it for local filmmakers.

This month, the Berklee College of Music Learning Center  hosts an unusual event.  The Film Scoring Contest gives contestants (Berklee students only) approximately one month to score a 5-minute film.  The winner and runner-up will be announced during a showcase on Wednesday, April 19th.  NewEnglandFilm.com spoke with Ricardo Poza from the Learning Center to learn the ins and outs to the contest, the details on the accompanying industry networking event open to all, and what future collaborations might be in store with local filmmakers.

Michele Meek:  Tell me a bit about why you started the series and what’s different this year.

Ricardo Poza: We decided to start a series of contests in order to provide students with more professional experiences. In most cases, academic assignments tend to be very safe because deadlines at times are flexible (depending on the teacher), students are not dealing with picky directors; their peers are so eager to help that they bend over backwards; and when giving critical feedback, fellow students tend to opt for politeness rather than honesty.

Last year, when we launched the Film Scoring Contest, we had some organizational and scheduling issues. We have found out that giving students extra work during finals is usually a bad idea, and our prizes were not very appealing to some. For this year, we started with a very aggressive ad campaign including forums and workshops, where even entry-level students could learn the basics of film scoring. Our prizes are definitely better, and we worked around finals as well.

We won’t know until the deadline how many submissions we will get, but there have been more than 500 downloads of the clip and we have received quite a lot of inquiries about the contest. Even a guy from Venezuela found our website and tried to enter the contest. We had to tell him it was just for Berklee students.

MM:  On your release you list some of the criteria for judging the winners — can you describe a bit more about that criteria and what makes a great film score?

Poza: Judging art can be very difficult. We tend to focus more on the technical aspects and less on the artistic side. The judging panel includes faculty members that are active composers for film and TV, as well as up-and-coming film composers from the Berklee community.

Submissions will be judged based on the following criteria: dramatic treatment, instrumentation/musicality, and quality of recording.  Any film can be scored completely differently and still be effective. A composer is just another employee, working for the overall benefit of the film. For the contest we are not giving any instructions or guidelines on how the music should sound or function.

In a real project, the director’s vision is of course the priority. The director, composer and producer will meet, and then decide where the film needs music, as well as the appropriate style or mood. It is very easy to pinpoint a bad score. I don’t want to mention any specific ones, but how would The Matrix series be with accordions and polka music? It’s an exaggerated example, but that’s the idea. Decent scores usually become part of the background noise. Great scores make you whistle the music while walking out of the theater. A great score is unique to the film, becoming part of the film itself.

MM: What do you are think the benefits in general to having a film score?

Poza:  It’s crucial… A good film is a combination of multiple disciplines blended together in harmony. If one of those parts fails, usually the entire film falls apart. In the case of film scoring, using pre-recorded music might be adequate, although there are plenty of legalities involved (getting the rights to use it, etc.). Putting it bluntly, a director might not care about the music, but the fact is that the audience does. Music has been part of films since the silent film era.

Having a custom score for a film means that the director has the power to decide when and what type of music should be in the film. A composer can even become part of the director’s style. Think of collaborators like George Lucas and John Williams, Tim Burton and Danny Elfman.

And the best part of all, having a great score could cost you nothing…

MM:  What type of equipment to score films are most of the musicians who enter using?

All entering students at Berklee receive a Macintosh Laptop with bundled music software (including music sequencers, audio editors, notation, CD burning, and others). From a rudimentary point of view, that’s all you need to create a score. Depending on the level of intricacy of the project, some other things will be required such as an audio interface, microphones, or studio space. It does help when the film is already a QuickTime file. For synchronization purposes it is much easier and more accurate to work from a digitized version of the film, than a VHS tape, or even a reel. Berklee students are trained in either way, though digital is more efficient.

Because of the enormous costs of studio time, and hiring talented players to bring the music to life, many independent and student filmmakers have to find alternatives. Composing on a computer is a constantly evolving process. In recent years, music software has become so sophisticated that, with talent in using sequencing programs, a full orchestral score can be manufactured from start to finish on a laptop.

MM:  How did you select the film to score? Whose film is it — was it produced by a Berklee student?

Poza:  We had some trouble deciding what film to use. We made some inquiries with local directors and it all fell apart. The director of the Learning Center, Pablo Vargas, decided to take on the endeavor of creating the film. He received a multimedia certificate from Emerson College, and had worked on previous projects, including last year’s contest film. For that project, all the shooting was done in his hometown country, Colombia, using cousins and nephews as actors and crew. This time, the film takes place on campus, and the crew and staff are students and work-studies from the Learning Center. The name of the film is Paranoia.

We would like to expand our contest and perhaps use local film projects, in order to showcase local talent, and create partnerships between filmmakers and composers. This could lead to a film festival with locally formed teams; the possibilities really are endless. There is so much talent in the Boston area, but it seems that no one talks to each other.

MM: Will the film and score be united permanently in the film? What is the future of the film?

Poza:  The film was created for the contest. It is a peculiar case, because the film’s purpose was to inspire students to create music for it. The plot is based on something very familiar to all of Berklee’s composers; difficulty in finding string players for recording sessions. During the film’s five minutes, the viewer is lead through a paranoiac perspective of this reality, providing different landscapes for a composer to explore. Both the winner and the runner-up will receive copy of the film with their names in the credits. In terms of the future of the film, it is difficult to predict. As far as I know it will not be submitted to festivals. Because it was created to benefit Berklee’s students, they are all free to show it as part of their demos.

MM:. Tell me a bit about the networking event that’s taking place — who would benefit from coming and what will they learn there?

Poza:  Not all filmmakers are audio savvy. There are a lot of independent films that have amazing visuals, but the dialog is hard to hear, or there is so much seemingly unintentional noise. Filmmakers don’t have to know all the nuts and bolts of audio production, and by delegating those tasks they can focus on filmmaking.

We decided to host an event where filmmakers can learn about the benefits of high quality audio in their films. We will discuss music, sound design and audio engineering. With such a large resource at Berklee in these areas, it is quite likely that filmmakers will find compatible collaborators.

The event will consist of three presentations: Music: The Ultimate Film Enhancer, Introduction to Sound Design, and Maintaining the Mix.  After the presentations there will be a reserved area for networking. We will have audio/visual stations set-up where composers and filmmakers can share demos and projects. We will also serve light refreshments. We are hoping that by the end of the event, filmmakers will become aware of the benefits of having high quality audio in their films, as well as compile a long list of eager-available-talented composers, sound designers & audio engineers who are ready to get to work.