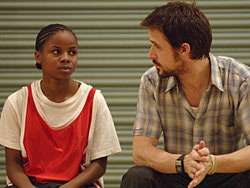 Share
Now in their fourth year at The Independent Film Festival of Boston, Anna Boden and Ryan Fleck launch this year's fest with their feature film Half Nelson. Anna Boden talks about what it’s like to love the work and the person with whom you work.

Anna Boden’s filmmaking career is just beginning, but you would never know it by looking at her résumé. She has produced, directed, written and edited four films with her partner Ryan Fleck, won an award at the Sundance Film Festival and expects their feature film, Half Nelson to be released theatrically in August. Boden is matter of fact on the subject, "We’ve been very prolific," she says.

Prolificacy doesn’t just happen of course without the passion, creativity and talent; which Boden and Fleck bring to their projects. The two filmmakers began their personal and professional collaboration several years ago when Boden was working on a school project and Fleck was a freelancer. "I asked him to help me and we ended up working on it together. The experience was really positive."

They began work on the script for Half Nelson about four years ago. When it was finished Boden says, "We had no resources to film it the way we wanted to: on film and as a feature, so we shot it as a short, on video for 800 dollars." The short, titled Gowanus, Brooklyn "kept the same mood, characters and tone of the longer piece," says Boden. It won the short filmmaking award at Sundance in 2004 and the attention it received attracted enough funding to film the story as a feature length narrative.

When they were casting for the original short, they were looking for a young actress to play the key role of the student and as it turns out, they didn’t have to look very far. "We went to schools in the neighborhood and told them what we were doing," Boden says. "When we met Shareeka [Epps], we knew right away that she was it. She just had a special quality, a natural comfort with herself. She literally went to school across the street from where we live now." Epps, who just turned 16, reprises her role in the feature. Ryan Gosling plays Dan, the teacher.

When Boden speaks of the experience of filming the feature, her voice still holds a trace of wonder. "We had a 40 person crew, the largest crew we’d ever worked with. We were able to get Ryan Gosling and Anthony Mackie, fairly well known actors." They shot on Super 16 film in Brooklyn for 23 days last July, finishing one day short of the planned schedule. "We had a great crew," Boden says. "Everyone was warm and friendly." She admits that at first she and Fleck had difficulty letting the crewmembers do what they do best.

"As Ryan always says, for every other movie it was just the two of us doing everything. But we realized that they could do [the jobs] so much better and it was a really positive working experience."

Boden says she really likes working with Fleck but admits that the line between the personal and the professional "totally blurs, especially when you are working 16 to 18 hour days. We don’t have an office so we’re just home. Ultimately though, I think the creative side rejuvenates the personal side and vice versa.

"We are so honest with each other," she says. "Sometimes there is throwing of pencils, and we do argue a lot, but ultimately it’s beneficial because it makes you think in a different way about it."

"Living with the script and the characters for four years was invaluable," Boden says. "Once you shoot, it’s different, and once you edit, it’s different. We knew the heart of the film, even if a shot or an exact line changed; we knew the emotional center of the film."

For Half Nelson both Boden and Fleck are credited as writers, Fleck is the director and Boden is the Producer and Editor. However, Boden says they always work closely together. "I’m on the set all the time. We shot list together, we make all the decisions together. And when I’m editing, he’s in the editing room a lot." During production, Fleck worked with the actors on the set and Boden worked with the production staff, sometimes fielding their questions and bringing them to Fleck rather than have all the producers approaching him continually with questions.

"On other projects we worked on sometimes people played ‘the parent game’," Boden says. "They would get an answer they didn’t like from Ryan so then they would come to me or vice versa. But the lines of communication were very good [on this project]."

Asked if members of the press or industry executives initiate conversations with Fleck rather than her, Boden says that does happen occasionally. "There’s definitely a cult around the director," she says. "He tends to get more interviews. [But] we do a fairly good job of presenting as a team, and we make it clear that it doesn’t work to talk to just one of us. We value each other’s opinions equally."

The film is being distributed by ThinkFilm and is scheduled for theatrical release in August, but Boston audiences can get a sneak preview at the Independent Film Festival of Boston on April 19th. Boden and Fleck will attend the screening and participate in a Q&A session afterward.

Boden, who grew up just outside of Boston in Newton, Massachusetts, and Fleck are looking forward to the experience. "It’s definitely our favorite film festival," she says. "We’ve found a lot of support here and we meet lots of filmmakers. We always come away with a new close friend every year."

At a festival like Sundance, Boden says "It legitimizes you as a filmmaker when you screen something there. It’s a crazy networking scene though — so many people, so many parties. That’s not exactly what Ryan and I are good at. We usually just talk to each other at parties," she laughs.

After attending the festival in 2004, they returned to attend the Sundance Screenwriter’s Lab with the script for Half Nelson. "They bring you out for a week to workshop your script," Boden explains. They worked with professional screenwriters, including Ron Nyswaner (Philadelphia) who read and talked to them about their script. "It was a really positive space for us."

Boden says they enjoy interaction with the audience at festivals as well as the informal conversations that can happen when people approach them after screenings. "The Q&A sessions are always interesting," she says. There’s always someone who sees something unique in the film." On the other hand they often have to answer the same questions over and over. "It’s hard to keep up your energy when you’ve been asked the same question over and over." Boden says with this film they always get asked about why they used the wrestling term "half nelson" as the title when there is no wrestling or wrestlers in the film. "It is a wrestling move," she explains "It’s used as a metaphor for a position you have difficulty getting out of. Every character in the movie is struggling with something."

The one thing the two filmmakers are not struggling with for a change is money for their art. "Up until we got funding for Half Nelson I was working as a receptionist. We both quit our day jobs when we got funding." Boden says she and Fleck know the money will not last forever and they do take smaller jobs and work for hire assignments as they come along. "That’s amenable to our lifestyle right now since we have to travel to promote the film," she says. For the future, Boden states: "We hope to sustain ourselves as filmmakers."

Her advice to aspiring filmmakers is to make the films any way that you can. "Before we had resources, we were making movies whether or not we had the money to do it exactly the way we wanted to," Boden says. "We made Gowanus as a tool for fundraising, but it was an incredible learning experience. Shooting things and practicing are just invaluable."

With a résumé that attests to their work ethic and talent, Anna Boden and Ryan Fleck hopefully will be producing films together for a long time to come.