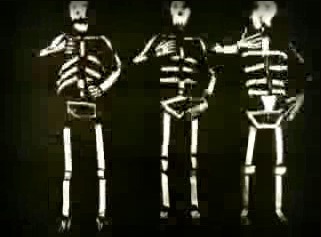 Share
Film Animator and Harvard Professor, Lorelei Pepi, talks about breaking the mold with her films Grace and Dem Bones Wiggle, which will screen as part of the Balagan Experimental Film & Video series on May 1.

There aren’t many venues in which art-house filmmakers can have their work screened. However, the Balagan Experimental Film & Video series at the Coolidge theatre has remained one of the few places where filmmakers can exhibit their work, no matter how experimental.  In fact, their mission for the series is "to promote films and filmmakers whose works do not fit into the traditional genres of the film industry."

Lorelei Pepi is a film animator who strives towards breaking away from conventionality to create films with meaning. As a true avant-garde filmmaker, animation is a field that allows and entices her to create beyond the confines of formula and structure.

Currently, Pepi works as a teacher at Harvard University, but that doesn’t stop her from breaking the mold in all of her outside projects. NewEnglandFilm.com had the opportunity to talk to her about some of her projects, as well as her two films that will be screening at the Balagan Experimental Film and Video series May, 1, 2006.

Amanda Axelson: I read your biography on the Harvard web page, as well as your website. Pretty impressive. Can you tell me about yourself and how you became involved with film animation? What have been some of your favorite projects?

Lorelei Pepi: I’m passionate about the projects I take on, and that means that I put everything into developing them. That passion factor is what keeps me in animation, because it means that there are always questions and things to investigate, and I’m rarely satisfied with things abiding by the status quo. Animation is to me, first and foremost, a fine art form that uses time and duration, and the exciting changes with technology mean that there are many new opportunities to explore what it means to create and use time-based art.

I started off in acting for the theater, and realized it wasn’t for me after about a year in college. I made a big life change, and headed off to RISD to study fine art. While I was there, I was developing my interests in the issues of time and space, and how to re-vision it. During a summer of working and living in London, I got a job working as a gopher in a great animation studio. This was at the birth of the exciting MTV era, and it started me thinking about what animation could be. I actually had never thought of it before, because it seemed really dull from my point of view, sitting at a desk all day doing the same thing over and over. That process isn’t really any different from what I know now, but I have a different relationship to it, and I now know all of the other options as well.

I then went to the Experimental Animation department at Cal Arts, headed by Jules Engel, and went to get my MFA. That experience changed my life, and opened up the world of art for me. The Cal Arts experience was just right, because it rewarded me for breaking rules, testing boundaries, going too far. Other people who were also really passionate and dedicated to their art form were there, and that kind of environment feeds you. Those same people are the ones that form strong relationships with each other, and my connections to the rest of the world of animation kept growing because of that.

AA: How have you juggled teaching and your film projects? Is there any kind of essential advice you pass on to your students?

Pepi: I don’t know about how well the juggling is happening. The challenge is also how you can psychically change gears between activities — tuning yourself towards the project in front of you isn’t like flicking on a light switch when you’re working on something creative.

I chose teaching because it chose me. I found that it was something that really made a difference in my life, as well as other people’s. I didn’t have that relationship at all in the commercial work I was doing. Teaching is something that gives excitement and energy because it’s always about being in a state of discovery. This works fabulously for me as an artist, as it allows me to still have plenty of my own creative energy for my own work.

My students, of course, have questions about what it means to live a life following an art god, and if there is balance. I try and break it gently that there are no qualified, easy resolutions. You have to find out if you can "share" the creative energy with a job, and then what kind of lifestyle you’re willing to live based on the money that job can bring in. Basically, it comes down to what’s most important, and almost always it’s about some kind of sacrifice somewhere.

AA: Most of your work is not traditional. However, I did notice South Park on your resume. How do you go about picking your projects?

Pepi: My own personal projects are born out of necessity- I have something burning that I have to pursue. I identify myself primarily as geared toward experimental work, but I have this other side of me that absolutely loves character-based work as well. And as I said, I am in tune with what "process" brings to the creation of the work, so that always comes into the equation when weighing my options.

I’m working on Happy & Gay right now, and it was provoked by the political and religious culture that is so damn homophobic. I’m using a very old character animation style for this piece, which fulfills an interest in "process" and a particular aesthetic. This is very much about me having a political voice, and using the work for motivations other than pure self-expression. Grace on the other hand, is a representative of something done purely for myself, as a way to realize a personal language that was previously eluding me. As I said earlier, I know animation as a fine art form, and saying why we do our art is an ever-evolving idea.

Commercial work, such as what I did on the South Park feature, is just born out of need for money and professional work experience. I learned a tremendous amount about technique on commercial jobs. Its funny how South Park came about — it’s because I was working for a lunatic in LA, Corky Quakenbush, doing stop-motion animation shorts for MadTV. We did a take off of the South Park TV show, but did it all using Peanuts (Charlie Brown, Snoopy) characters. This translated to this SP job of course. What was funny is that they said that WE did bad animation, and that the "real" South Park animation was much better. I’m not proud of the work, but it makes me look cool to my students. I also have a SP jacket with Satan on the back of it.

AA: Can you tell me about the experimental film series Balagan screening coming up May 1st?

Pepi: Sure — they’re screening two of my pieces. One is an early film called Grace, and a new mini-short called Dem Bones Wiggle. Dem Bones is a pixilation film that I did with my Harvard students as the actors. We did the shooting in about 2 hours, and the editing was not much longer than that. It’s made to look like a faded, old film of skeletons dancing, set to a 1920’s vintage ragtime piece. It’s very upbeat and catchy. It’s simple and has no ulterior motives except to be momentarily entertaining.

AA: How did you become a part of the series?

Pepi: Well, my film Grace was screened at the Balagan a while back, and so we had a relationship already. This time, what triggered it was the fact that I ran across the Balagan programmer Jim Shaw when I was doing a presentation for my current animation production Happy & Gay. He’s part of the Filmmakers Collaborative, and I was asking them to become my non-profit sponsors so I could apply for special grants (which they agreed to do). So evidently, he liked this piece and saw a place for it in the screening plan.

AA: What makes it experimental and how does it differ from your past projects?

Pepi:  Dem Bones has no plot line. It’s compiled of gestures, movement and pattern, and qualifies as a dance film. For me, the biggest difference relates to the process, which is integral to defining the realization of an artwork. The difference is that it didn’t take 5 long years to make, but instead took about 6 hours total. It was about being improvisational and following immediate intuitive response, and not overdeveloping the idea so much that you drag it to its knees. That’s a really hard thing to do with animation for obvious reasons. Grace on the other hand, is very structured and planned, and took 3 years to make. The goal of that film was much more serious in its intent, as the filmmaking process was also my personal discovery of my own voice.

AA: What was your process for working on it and how long did it take you to complete it?

Pepi:  We shot Dem Bones digitally so we could get immediate feedback and output. We use Macs and a 3-CCD video camera on a tripod, and Frame Thief as a frame capture software. This was an unusual situation in that I directed a project whose premise was to teach the students about pixilation animation through practice. The students wore all black, including a head covering, and they applied "bones" of masking tape to their clothing. I had pre-counted measures and beats, so I knew how long we needed gestures to be. I directed the movements, counting off and demonstrating poses. We shot against a black background with dim directional lighting, and applied a heavy contrast filter in the edit. I then applied film grain effects as a way to get to the old vintage look and feel. The skeletons and film are that much more stylized in their presence because of the extra processing. The editing was all about loops and gestures in sync with the musical rhythm.