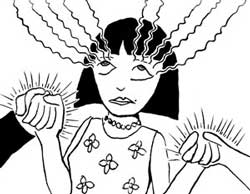 Share
Director Steve Gentile speaks about his hand-animation film Never Live Above a Psychic which screened last month at the 2006 Slamdance Film Festival.

When asked about the best part of making his latest film, Never Live Above a Psychic, Steve Gentile said, "Those times, drawing at around midnight, when I should go to bed but I get on a roll and keep going through the quiet, wee hours.  It’s a great time to explore the record collection." The hard work was well worth it, as Gentile’s film became part of the Slamdance Film Festival this year. This was his first submission to the festival. The film played four times in Park City, and was also chosen for the Slamdance Online Anarchy competition, where people vote for one of the nine films on the website.

Never Live Above a Psychic tells the story of a man who, yes you guessed it, lives above a family of psychics. As they go about their lives moving furniture and driving him crazy, a war ensues. There were ups and downs to the painstaking process of hand- animating Gentile’s third film. In a recent interview he discussed them.

Andrea Maxwell: What was the worst part about this process?

Steve Gentile: Well, Never Live Above a Psychic is a hand-drawn, animated film.  It’s comprised of something like 6,000 drawings.  At its best, it’s a very meditative thing making all those drawings, and at its worst, I feel like a psycho whose eyes can’t adjust to daylight. The shooting was the worst part — one drawing at a time on a tripoded 35mm Mitchell Camera system that was set up by my colleagues at MassArt, Flip Johnson and Adam Savje.  The shoot took a couple weeks of 12 hour days.  It hurt; it was winter; and my studio had no heat at night.

Gentile: There’s no dialogue in this film, so there’s no real script, but I had an ever-changing storyboard which was flexible enough to alter as certain shots were animated.  It’s fine to plan things, but each animated shot occurs so slowly that I find my mind wandering, and sometimes the characters do things on their own, which changes the story.  I’m just a frustrated over-actor posing as an animator.

AM: What are the advantages and disadvantages of doing such a short film?

Gentile: When you’re making an independent, drawn animation, there’s not much of a choice.  A short is all I can handle alone.  My stuff is pretty fully animated, so I can’t sit down and draw a feature. The downside is that exhibition favors feature-length stuff, but this is my third animated film, so I guess I’m slowly building a body of work.  I’m almost at a half an hour!  Also, the stakes are so low with a short, I can take risks in content, risks in style. The longer a project gets, the more money it involves, and when it involves a lot of other people’s money, they tend to try to affect the final product.

AM: What about the advantages and disadvantages of doing black and white?

Gentile: I got on the black and white kick in college, and it’s just stuck.  I love the simplicity, the large areas of black — I use India Ink. I was told by a distributor after my first film that I couldn’t be doing black and white animation unless I was Woody Allen.  I probably became defiant and belligerent, so the next two films were black and white.  The next film will be color, though.

AM: What is next for you?

Gentile: I promised my mother I wouldn’t jump right into the next film, but I did anyway.  It’s an animated documentary called Henry and Ben: Two Animated Men.  It’s a colorful look at the weird intersections between Benjamin Franklin and writer Henry Miller.  And it’s in color — pastels, watercolor, some pixilation, etc.  A lot different than my past animated work.

AM: What is your professional history?

Gentile: I’ve done a lot of film stuff, played different roles.  I’ve edited six or seven indie features, done location sound, lighting, co-produced a documentary for PBS, even some screenwriting for the Sci-Fi Channel — all from Boston.  I haven’t been to L.A. since 1985 when I worked as a P.A. for NBC.  I had a run-in with a higher-up who actually had the nerve to tell me "I’d never work in this town again."  Thankfully, he was right.

AM: Is New England a good area for filmmakers like yourself?

Gentile: Making a living as a filmmaker in New England is tough.  Everyone wants you to work for free.  You have to wear 23 different hats to squeak by.  I’m fortunate enough that I can teach.  I’m currently a part-time Assistant Professor at MassArt in their excellent, new animation program.  Also, the LEF Foundation is an incredible resource to New England filmmakers. I’m not positive, but it looks like every New England film that’s in Sundance or Slamdance in 2006 had LEF funding.  We’re lucky to have them.

AM: How many people worked on this film with you?

Gentile: There’s only one other person who made a major creative contribution to this film, and it’s a big one: Brian Depaul Carey of DexterMedia in Allston provided several outstanding music cuts, as well as the re-recording mix.  Brian’s a fantastic composer, and a great cook, too.  He has a smoker.