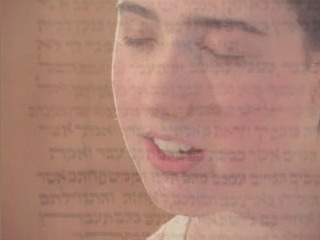 Share
Filmmaker Irena Fayngold explores the tension between religious belief and sexual identity through the eyes of a teenager coming of age in the modern world in her film Hineini: Coming Out in a Jewish High School.

Adolescence is a time of discovery and formation of one’s identity, and the journey can be equally exhilarating, daunting, and frustrating. All teenagers struggle to find their voice within their particular community and ultimately the wider world. Shulamit Izen (Shula) is no different. Her world, however, happens to be steeped in Jewish tradition, and Shula is a lesbian trying to find where she belongs in the context of that tradition.

Irena Fayngold’s Hineini: Coming Out in a Jewish High School tells the story of Shula’s determination to establish a Gay-Straight Alliance at the New Jewish High School (now the Gann Academy), a private pluralistic religious school in Waltham, Massachusetts. But it also tells the bigger story of what it means to be gay and Jewish in modern times and how to reconcile one’s sexual identity with a religion that calls homosexuality an abomination. As Shula asks in the film, "Where do I fit into my religion? What does it mean that I’m doing something that’s prohibited by Torah?"

Fayngold’s first film, 1999’s "Getting to Home Base," was a deeply personal visual essay on her own sexual awakening, which she completed while a student at the Museum School. "My favorite films are personal documentaries," says Fayngold. "Even when you make a documentary about someone else, ultimately you always tell your own story."

Fayngold, who works in educational programming at WGBH, is a member of Keshet, an organization that strives to make the Jewish community more inclusive of its GLBT population. A fellow member, inspired by a talk Shula gave at a fundraiser, approached Keshet director, Idit Klein, and convinced her that Shula’s powerful story should be heard more widely. Klein contacted her long-time friend Fayngold and asked if she would do a five-minute video about Shula.

"The initial idea was to do a profile. But as I talked to Shula and to others, I realized the story was not just about one girl’s identity, but about contemporary Jewish life," says Fayngold. Adds Klein, "As we started working on the short video, it became clear that Shula’s story was part of a larger story of an entire community going through a challenging process and being ultimately transformed." The five-minute video is now a one-hour film.

The aim of the New Jewish High School is to promote learning by creating an environment of pluralism and diversity, and it prides itself on the fact that its students represent all sects of Judaism. In 2002, Fayngold approached its headmaster, Rabbi Daniel Lehmann, and received his approval to film. But after the first day of shooting, the school’s board of directors rescinded permission and denied Fayngold access to any images of the school. Since the high school was the center point of Shula’s story to create a GSA group, Fayngold began to worry if she would have a film at all.

"I could easily have said I can’t go ahead, but I felt this was an issue that was obviously very much alive and contentious, and so it was important to talk about." What Fayngold learned from this challenge was a rite of passage common for many filmmakers — how to turn what seems like an insurmountable obstacle into an opportunity. Unable to film inside the school herself, Fayngold discovered a student, Arnon Shorr, who had shot footage over the years with his own video camera.

"With each obstacle, you feel you’ll never get the project done. But in this case, we found a student who, because he was a student, had fantastic footage that I wouldn’t have been able to capture. In the end, the footage was better than what we could have gotten." However, Fayngold did not feel comfortable using the footage until she got the board’s approval, so she focused her attention on getting meaningful interviews.

As a result of the board’s ban, Fayngold felt she needed to warn potential interviewees ahead of time about the board’s decision and give them the choice whether or not to participate. Some who initially agreed to be interviewed, later backed out because they felt they were going against the board’s decision. The process proved difficult at times for Fayngold as she strived to create an atmosphere that made students and staff feel comfortable about opening up to her. Shula herself is a magnetic presence on film. Soft-spoken, yet determined, conflicted, yet optimistic, she energizes and inspires both students and staff alike.

Two and a half years later, realizing that the film was going to be made with or without their approval, the board reversed its decision, allowing Fayngold access to the school and permitting her to interview the headmaster. However, since the school had moved and most of those involved had graduated, Fayngold ended up using a lot of Shorr’s original video footage, intercut with photos and interviews.

What unfolds is a story about personal struggle — the deeply religious Shula’s struggle with her own sexual and religious identity, the struggle of four gay teachers who had been afraid to reveal their orientation to students (and who dramatically do so after an assembly organized by Shula to discuss sexual orientation), the struggle of orthodox students to accept a lifestyle they have been taught to reject, and the struggle of the headmaster to find a balance between advocating pluralism and adhering to the traditions of Jewish religious teaching. But it is also a story about the wider struggle of the Jewish community as a whole as it deals with adapting and evolving in a rapidly changing world.

Along the way, Idit Klein kept pushing Fayngold to show excerpts of the work in progress at conferences and workshops, something Fayngold at first found terrifying, but which she ultimately credits as being a motivating factor to finish the film. "What kept me going through the difficult times was Keshet and Idit. As scary as it was for me to show unfinished things, it was so helpful. She pushed me because this is a topic that needs media about it. It resulted in our half-hour work in progress which got us into the Boston Jewish Film Festival and other festivals."

Fayngold can’t say enough about the value of focus groups in helping her discover the final shape of the film. Fayngold observed audience reaction, both verbal feedback and body language, and took those observations back to the editing room, in one case, going back to shoot a scene she was initially unsure about. "At a certain point, you’re so close to the film, you lose perspective. With focus groups, you see the film through their eyes and in a different way. You often have to get very far into a film and have it almost done before you see what needs to be changed."

Hineini premiered at the Boston Jewish Film Festival and, according to Fayngold, exceeded all their expectations. It sold out its first screening, prompting the MFA to schedule three more screenings, two of which also sold out. Thinking the film’s Boston success was due mostly to its local appeal, Fayngold was pleasantly surprised at the sold out screening at a festival in Washington, D.C.

"Educators, parents, lots of people feel connected to this issue and want to understand the point of view of young people," says Fayngold.

Two separate reactions in particular pleased Fayngold. The first was when a board member approached her after the screening and told her he wished he’d had a chance to see the film before the board had made their decision to allow only a limited form of GSA on campus. Second, a New Jewish High School teacher who felt he’d always been a supportive figure confessed to Fayngold that he now realized he should actually play a more active role in student life. For Fayngold, these reactions confirmed that Shula’s message indeed had gotten across.

"What inspires me about Shula and the other gay and lesbian teachers and students I met at the school is that so many of them were unable or unwilling to leave the tradition even though it seemed to reject them. What I learned from them is that Judaism is strong and has survived because it evolves."

Contrary to most independent documentaries, where the filmmakers have to beg for media coverage and distribution, Hineini has received a tremendous amount of press support in the Jewish community, and Fayngold and Klein have been inundated with unsolicited requests for copies of the film from both Jewish and non-Jewish entities. "Those requests showed there really was a need for this content. There was nothing out there that dealt with GLBT issues in a Jewish high school context,’ says Klein. The interest has brought additional funding to Keshet, which Fayngold is using to create a curriculum guide, a website, and a DVD version of the film.

The biggest takeaway for Fayngold as a filmmaker is the power of collaboration in all phases of production. She speaks enthusiastically about the collaborative relationship not only with the crew and Keshet, but also with the kids and staff at the school. "Making documentaries is an enormous undertaking, because you have no money and you have to do everything and you might not have all the skills required to do it. That’s where collaboration comes in. So many people helped out and gave so much of their time," she says. "It’s wonderful to dig so deep into material and then allow someone to come in who has news ideas. It’s my favorite part of filmmaking."