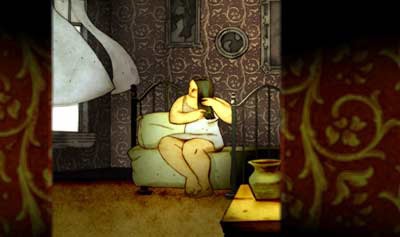 Share
Providence-based filmmaker Daniel Sousa reflects on the 2006 Sundance selection of his film Fable and the enchantment of bringing paintings to life.

Normally, when festivals want to show one of Dan Sousa’s animated films, they send an email. So when Sundance called, he figured there must have been a technical problem. To his surprise, the call was one of congratulations. His latest film Fable will screen with five other animated shorts in January, another accolade for Sousa’s growing list of accomplishments.

Sousa studied illustration, painting, and animation at Rhode Island School of Design (RISD), and then directed 2-D and 3-D commercials and television at Boston’s Olive Jar Studios. He describes Olive Jar as his "graduate school," a high-energy, artistically rich atmosphere where young animators stayed through the night to learn new techniques from each other. When its doors closed in 2001, he joined forces with Olive Jar alums to form Handcranked Film Projects, a collective to foster personal endeavors.

Busy juggling work and art, Sousa appreciates his New England colleagues and mentors and cites their collective influence on him. "Some of the best artists are people I know," he said in a recent interview. Fortunately, NewEnglandFilm.com had the chance to learn more about Sousa and his enigmatic approach to making stories move.

Erin Trahan: If you’re at a party and meet people for the first time, how you respond to the inevitable question "What do you do, Dan?"

Dan Sousa: I usually say I’m a filmmaker and explain all the other things I do to pay the bills. I teach part time at RISD and I freelance on TV commercials through Global Mechanic. Between those two jobs I earn enough to take two months off a year to pay for my art work.

ET: Do you think of yourself as an artist first and foremost?

Sousa: I use the word artist sparingly. I try to make art, yes, but I’d rather describe the process than the end itself. I started out as more of a painter and illustrator. Initially I didn’t see animation as filmmaking; I saw it as a way to bring paintings to life. I think what I do is somewhere between being a filmmaker and being an artist. The plots and narratives in film are not ones that I usually follow. When you talk to filmmakers, they use scripts. I don’t write scripts.

ET: What is your process like? How do you construct your stories?

Sousa: It’s very long and inefficient! With commercial work, the clients have to know what you’re doing. You have meetings and get storyboards approved. My personal work is more convoluted. I go down dead ends and wrong paths. I start with images that I want to bring to life somehow, and one shot leads to the next. Once I start putting them together, the film tells me what the next shot should be. I end up having to sacrifice a lot but I don’t think of it as waste. When I was doing more painting, I learned to be ruthless with my decisions — to not be too precious about any part of the painting. I’ve applied that thinking here.

ET: How do you know when your project is done?

Sousa: Usually the film gathers a certain momentum and I have structure in place. That’s when I feel like I can engage in sound design. I’ve been fortunate to work with Dan Golden, who is also a visual artist, so we are able to communicate in a very visual way. A sound designer is not just writing music or recording Foley effects, they also weave a score between sound effects and atmosphere to be able to match the key of the film. So far I have delivered him almost finished animation and he puts it to music.

What I’m trying to look for in the future is a deeper collaboration between the sound design and the visual treatment of the film. That’s something that should be in place right from the get-go, even long before there is a rough cut. So the sound designer could definitely participate in the shaping of the idea, and take as much ownership of the project as the director might. That means that there will be times when the visuals take the back seat and let themselves be driven by the sound, and vice-versa.

ET: Your most recent film, the seven-minute animated Fable, was selected by Sundance. What is it about?

Sousa: It started as an Alice in Wonderland story. That changed in the making of it and it became an almost fake fairytale about two lovers who never really meet in human form. They transform into animals and as such are mortal enemies. They’re stuck in this curse and it’s never resolved whether or not they die or are reincarnated. The whole film could be read as a cycle.

ET: I know that I was left wondering at the end of Fable. How important is it to you that people walk away with a clear understanding of what they just saw or experienced?

Sousa: Not terribly important. I see them as a kind of poem. They work on many layers. The first superficial layer is the aesthetic, the atmosphere, mood, feeling, or sensation. If an audience walks away with more questions than answers, maybe they’ll want to see it again. If they walk away with a very clear idea about what it was, they might forget it quicker. To be able to have something resonate and stay with them a little longer, I think, is better.

ET: Where are the audiences for animated shorts? How are you tapping into existing audiences or creating new ones?

Sousa: It’s hard to tell where the audience really is. These films are not commercially viable because they don’t fit into half-hour blocks for TV. There’s not really an outlet for distribution unless someone wants to put them into a compilation. But traditionally, they screen in festivals where people have a certain understanding about animation, what it can do, and they appreciate it for its own language.

Animation festivals are very different from film festivals. They seem warmer. Because animators are shy by nature, festivals can be the one opportunity they have to socialize. Also, most animation festivals are international. There are no entry fees because they are subsidized by governments. They’re cultural events and are planned to reflect well on the host country.

ET: What is your ideal setting for having your work screened?

Sousa: I’ve been very distrustful or suspicious of the internet. You never know what else is going on at the same time someone is watching your film. They could have several other programs running, or other windows open. They could be watching it on a tiny screen.

Ideally my work would screen in a dark room where the quality of image and sound is controllable. Where people can watch it from beginning to end and not just walk in on it. This is ideal but not always realistic. Maybe if they see it online, they’ll want to seek out a theater screening.

ET: It was especially powerful to see your three films, Carnal Ground, Minotaur, and Fable, one after the other. Are you intentionally creating a larger story arc? I ask because all three have distinct narrative commonalities — dialogue free, similar music, and quite possibly the evolution or recurrence of the same characters. Is it the same beast or bull? The same hunter? Is Fable’s woman Minotaur’s girl grown-up?

Sousa: It’s turning out to be like that but it is not so much intentional. It has come from the same process I use to make one film: I finish a film and that determines what the next film will be. I uncover certain things I want to explore further and I can make a whole film out of that. With Carnal Ground, my student film, there’s the whole idea of the dual nature between man and beast, similar to the relationship between hunter and man that bled into the making of Minotaur, in which the monster isn’t all monster. There is almost a child inside of him, capable of warmth as well as extreme violence. After making Minotaur I realized the girl is a fairly one-dimensional character and I wanted to flesh her out and tell more of her story, which I think happens in Fable.

ET: One thing I think is understood about animation is that even with new technologies, it is painstaking and time-consuming, which is why Pixar or Disney have fleets of people coloring just blue skies, right? These three films were made over the last 12 years and there were many stunning moments when I wished I had a still from one of your films hanging on my wall. Since you were trained as a painter, have you ever been allured to leave animation behind to create still art?

Sousa: Oh, all the time. Animation is a weird, surreal, activity. It has this power to erase your memory. When you are making it, it is so difficult and so painful. It takes a long time to get any results but when you do it is completely magical. And you think, this isn’t so tough! I’m going to do another one. Then, all of a sudden: Why did I start this? It’s an emotional roller coaster ride. I guess the reason I keep making animated films is because it is so elusive. It happens out of thin air and when it’s done, you don’t have an object left over. It only exists through the playing out of it.