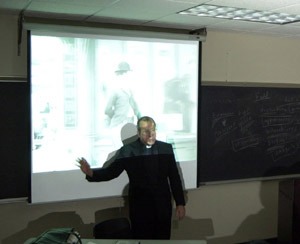 On November 16, 2005 at 9 pm in the Ryan Family Concert and Lecture Hall of Providence College, the film department will present their Student Video Slam, which they describe as, "an open festival of work in all genres by student filmmakers." The festival accepted submissions from students at both Providence College and Brown University.

NewEnglandFilm.com caught up with two students whose films were chosen for the festival, Matthew Weber and Matthew Silva, and spoke about their respective projects, "The Break" and "The Letter." Both films are shorts, one six minutes and the other 19.

"My film is on the shorter end of the production scale. It is only a six minute anecdotal documentary on what it was like having a broken foot for a summer," says Matthew Weber of "The Break." "It goes over interviews with my family, dramatic recreations of the ‘break’ and reflections on my neediness." Basing a film on real experiences is a good place to start in Weber’s mind. "Anytime you do a film on real life, you are drawing from the real human experience and others can relate/better understand something rooted in reality with a few whimsical twists."

Though it seems like a simple task, "The Break" nevertheless was an all-out effort concentrated into a small period of time. "I usually work pretty hard on my films over the course of a short time," says Weber. "This one took about six days to perfect with the bulk of the filming and editing taking place over the first two nights."

Lessons, and the dos and don’ts for future films came out of the project in a number of ways. "I have learned how to turn a negative event into something rather humorous and comical. I have harnessed the power of my family’s acting skills along with the ability to tell a story in a clear, comical, and concise fashion. I do much of the work myself. My crew consisted of my family members (sister, mother). They are profoundly helpful and supportive."

These lessons put Weber into a good position to share his knowledge with other filmmakers just starting out: "Advice I would give is to not be intimidated by the process. Equipment and start up costs can be a bit much, but thrifty spending and personally investing one’s self in one’s work makes it worth it. I will always have filmmaking as a part of my life, whether I do it professionally or as a passionate hobby. Filmmaking is the grand test of management and creativity…discipline and passion. It involves so much that it can help you juggle whatever work projects you may encounter in the future."

Still trying to find what suits him best, at this point Weber prefers being in front of, and behind, the camera for different reasons. "I like the control of the directing but don’t like the burden of much of the technical aspects to production. I also like to act, which makes the directing rather a challenge sometimes." Acting, he says, remains a hobby. "Acting in some respects, takes away all control…directing breeds it. You can put your own spin on a part but you are essentially constrained to the description. Directing is harder and puts a lot of pressure on the project. Ideally, directing yourself is great but it is hard if you do not have a DP with a good eye for the shots."

In his own words, Brown University student Matthew Silva’s movie "The Letter": "questions whether or not there is any morality involved in the spending of money. There are obvious situations where this is true (buying drugs vs. giving to charity), but there are other areas which are not as clear. This movie aims to create that type of situation and present one possible scenario."

Where do Silva’s ideas come from? "Everywhere," he says. "Keep your eyes open and you’ll find something. I especially like carrying around a small notepad and taking notes on peculiar people I meet." Though a more ambiguous connection to real life, "The Letter" is also based on Silva’s own experiences. "I got the idea when my mother first mentioned to me that her uncle had left her and her sister an inheritance. I thought, given the significance of the money, how should one spend it?"

Silva learned from the project as well, in personal ways, and like his film there are positives and negatives to every story. "I found it difficult to work with friends, because at times I’d feel awkward criticizing people I knew. However, it was easier to schedule times with friends than with people I didn’t know." Another lesson learned was how difficult the process really is. It took Silva, "much longer than expected. I’d say perhaps a three month span. Though in actuality, we only worked on it for about 30-40 hours perhaps. Scheduling was a huge issue."

Matthew Silva and Matthew Weber have both largely trained themselves in the art of filmmaking. Weber has taken 15 credits of classes, and Silva has taken none. "I learned everything I know about filmmaking (admittedly, very little) on my own, through both practice, and also reading an introductory amount of film theory."

Silva also has a few pieces of advice to pass on — well, one word, actually: "Plan, plan, plan. Pre-production is the most important part in making movies I’ve learned. Especially for projects of a bigger scope. I’d say the first time make a movie in an improvisational manner and then after you’ve gotten over the stress you’ll realize the importance of having a solid script, well rehearsed actors, and a prepared crew." Silva believes, this can help in any field one might wish to pursue. "Planning is crucial. Whenever you undertake any project that involves coordination of various people with potentially conflicting schedules and interests its important to plan as best as possible, and prepare oneself for backup plans and adaptation."

Both Matthew Weber and Matthew Silva are hopeful about the Student Video Slam. "I hope the festival gives my work more exposure," says Weber. "My films have always been chosen, well received, and liked at other PC festivals but always lose out to an ‘intellectual film’ or pseudo art house flick. I am more into entertaining and get the joy out of a room full of people laughing at my work. My film was chosen because, I feel, it met the criteria and was worthy enough of a production to be shown at the festival."

Matthew Silva allowed the lead actor of "The Letter," Jeff Dujardin, to answer this question for him. To put it simply, the Student Video Slam is "a chance to show off your hard work and see how people react, and a chance to see other people’s ideas."