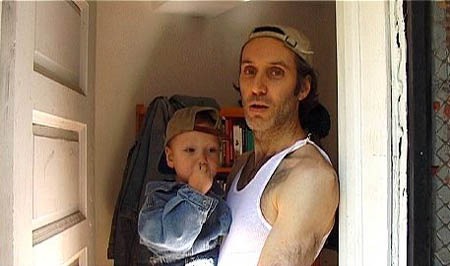 Share
Actor/writer/director Robert Margolis bares anywhere from five to 95 percent of his soul in his award-winning mock-documentary 'The Definition of Insanity,' screening at the Boston Jewish Film Festival this month.

"Is your film autobiographical?"

Robert Margolis hears this question more than any other from audiences who see "The Definition of Insanity." Margolis plays the film’s main character Robert Margolis, a passionate but aging actor on the brink of either "the big break" or utter ruin. He botches auditions, begs for meetings with agents, and gets himself kicked off sets. Failure looms around every corner but Robert holds on to something any artist would envy — the drive to act no matter what people think, even if it sends him or those closest to him over the edge.

Real life Margolis is also an actor. He, too, has tested the limitations of friends and family in service of his calling. And while his experiences spurred the creation of "Definition of Insanity," he leaves the mystery of what is and isn’t true to the audience. Billed as fiction, the film includes documentary footage. But even when pressed to identify the "real" scenes, Margolis laughs and changes the subject. It’s part of the hook.

"The Definition of Insanity" has accrued more than a dozen festival screenings and awards, including Best Director and Best Actor at the Chicago Independent Film Festival. Part of the 2005 Boston Jewish Film Festival, the Tuesday, November 8 screening at Coolidge Corner Theatre opens with a live performance by Boston-based singer/songwriter Amy Fairchild, whose songs are featured in the film. NewEnglandFilm.com recently talked with Margolis to get the facts, and the fictions.

Erin Trahan: So, how autobiographical is "Definition of Insanity?"

Robert Margolis: The stock answer is — it’s becoming more autobiographical with each passing day. Most is fictional, but some people assume it’s a documentary. And in that way, they don’t understand how difficult it was to make. We succeeded with acting very naturalistic. The character named Robert Margolis plays with a crossover between reality and fiction. We wanted audience to be in a similar state of uncertainty and anxiety as the main character.

Margolis: It’s an interesting conversation. Since the digital revolution, boundaries between fact and fiction are breaking down. Some are great. Some are dangerous. If you look at a lot of narrative films, they’re kind of played out. They’ve run out of ideas. There’s a constant recycling of remakes, sequels, and new films that use the same generic violence. They’re not resonating with people anymore. People are looking to connect regardless of whether it’s called narrative fiction or documentary. Documentary as a genre is becoming more and more popular because people are craving something they can connect to that is relevant for them, something that’s not just escapist. I mean, nothing is strictly, objectively, true. The minute you’ve observed something you’ve changed it.

ET: In one scene you’re on a payphone and the signs behind you read "Eyes Examined" and "Hearing Aids," presumably no coincidence. How often do you think actors need to read the signs they’re not seeing?

Margolis: To be an artist, you have to be in a certain level of denial. There’s healthy denial, since the world is so filled with horror, violence, and disease — you can get lost in your own existential neurosis — but you wouldn’t leave your apartment. And then there’s delusion. One thing we were exploring: what’s the difference between passion, or being driven by a dream, and delusion. Very few people make a full time living as an artist. The people who break through, like Vincent Van Gogh, he cut off his ear and died an unknown. He was validated post mortem.

One of the questions we’re raising is the idea of the American Dream. This guy [Robert] is an everyman. We’re told it’s the American Dream but really it’s like the lottery. Is the point that you never realize success or that you’re following out your dream?

ET: One critic calls your film a "clever act of self liberation." Did playing a so-called "bad actor" allow you more freedom or range?

Margolis: It was like putting myself in my worst nightmare but knowing I would wake up. It was liberating on the level of, well, just Frank and I made this film. Nobody stopped us from making it. We had complete control over our artistic future and were not at the whim of anyone else. We worked with 50 actors. All except Peter [Bogdanovich] and Jonas [Mekas] are struggling, so it was exciting to bring them into this project. And whether or not he’s a bad actor — it’s kind of an irrelevant issue. He’s trying to lead an authentic life. He has to act. It’s something he needs to do to give him a sense of who he is.

Margolis: My being smart hasn’t particularly helped me. It helped me get good grades in college but since then I’d have to say it hasn’t factored in. But I go back and forth. I feel successful because I am creating what I want to create and I am finding audiences. That way I know this project is not just a self-involved home movie. But I don’t want to end up like Van Gogh. I would love to be free of the financial pressures of daily life, and be able to bring more people in to work with me. Our culture is so much about money and recognition. You try to avoid getting too caught up in it, but if no one is seeing your work, are you an artist? I would feel like a success if I could just make enough money so I could make another movie…

ET: Frank Matter co-directed and shot "The Definition of Insanity." How did your collaboration come about?

Margolis: He cast me in his first feature, "Morocco," in 1997, and we became friends. I loved doing "Morocco," and later "Criminals," but neither was seen by wide audiences. So Frank and I were talking and decided to do our own project from scratch. I am also a writer and it’s frustrating to always put myself in other people’s work. I have very little control. So we solved all these problems: I’ll act, he’ll shoot, we’ll co-direct and if it doesn’t get seen it’s our own issue.

The marketing is more exhausting — it’s incredibly time consuming. We shot the film completely outside the system, so therefore no one really has incentive for the film to be successful, except for us. We’re at the point where we’d love to sell it. We are cautiously optimistic. But it’s been a great collaboration because we resolved conflicts in ways we were both happy. Really, it’s the best time I’ve ever had both as actor and writer.

ET: Most of the music comes from two artists, jazz musician Paula Atherton and singer/songwriter Amy Fairchild. Did you have them in mind while you were filming?

Margolis: We didn’t want the music to replace the scene or to tell people how to feel. We wanted it to enhance what was going on. Once we finished shooting, voice trainer Gerry Janssen (who plays a voice trainer in the film) gave us a whole bunch of CDs from his students. That’s how we discovered both Amy and Paula. Amy’s music came from a previously written CD, but it was so perfect it was as if she had written it for us.

Paula created original music. She and [fellow musician] Cliff showed up in the studio and improvised, a perfect counterpoint to the film, which also has an improvisational quality. She watched the film, and we would remind her of what scene she’d be playing for. We wanted to get out of her way and let her create. We tried to do that throughout the film. We kept our options open to allow for accidents and moments of inspiration. Then we incorporated Paula and Cliff into the film, as musicians in the subway, which is another way of playing with fiction vs. fact.

ET: Is there a scene that gets better every time you see it?

Margolis: When we were editing, I was going crazy. We watched everything 10 or more times. Now what I notice most is the audience’s reaction. Some people find the movie incredibly sad, other people laugh through the whole thing. Two-thirds through the film in Minneapolis, a woman left, sat down outside the theater and started crying. Then she got up. Two minutes later she came back. It can be quite a dichotomous experience.

I’ve seen it so many times, I get lost in it now. I still enjoy it, but I find it strange. It’s hard to watch myself. It’s as if I’m watching another actor.