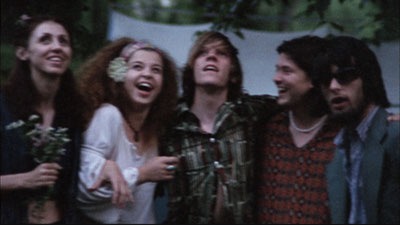 Share
Cinematographer Scott Sniffen talks about the visual challenges of faking reality through the new film, 'NOVEM,' a fictional documentary about music, relationships, and the link between generations.

Cinematographer, Scott Sniffen, has carried a weight on his shoulder since he was a young boy. Luckily for him, that weight became his life’s work. "I basically had a camera on my shoulder since I was eight years old. I went to film camp and realized, ‘OK, this is me,’" says the Connecticut native. Sniffen has been involved in film ever since, graduating from the University of Bridgeport film school and starting his own production company, first with a partner, and then on his own in 1990. As SniffenHD, he has worked as a DP and director for commercials, business communications, HBO, ESPN, fundraisers, educational programming, "and other stuff that fills in the gaps between films and pays the bills." Some recent indie features include "The 1000-Year Reich," and "Remember," which are still in the post-production phases.

Sniffen is also the cinematographer on the new film, "NOVEM," which screens at the Bethel Film Festival on October 26th and 29th in Bethel, Connecticut, 20 minutes from Sniffen’s home. "NOVEM," directed by Brad Kimmel, tells the story of nine college students in 1973 who decide to spend six days in a rural recording studio recording personal, introspective songs that each one of them has composed. On their way back to campus, their van is involved in an accident and all nine are killed and their studio tapes disappear. Flash forward 30 years later to a present day student at the same college who discovers the lost tapes and a 16mm film shot by one of the band members at a yard sale. Intrigued, he and his friends, with the help of a film student, decide to make their own documentary about the band, their music, and what happened back in 1973.

"The story essentially is that the music and film are being discovered by the present day college kids and by the audience at the same time," says Sniffen, who was intrigued by the "unique and interesting" storyline that Kimmel related to Sniffen over the cell phone as he drove on the Long Island Expressway. Kimmel, a producer of shows about classic cars and motorcycles, always wanted to do a documentary about a band. Eventually he decided to create his own band with its own back story and songs.

Part of the appeal of "NOVEM" is the question of whether it is truth or fiction. Its website gives no hints, but rather encourages the mystery by presenting the film as a documentary made by Ben Harris, a character in the film, complete with background information on the present day students and why they decided to embark on their investigation into the band’s past and the preservation of its musical legacy. "It’s a nice little film," says Sniffen. "The biggest challenge was trying to make it look real and to have the audience watch it and wonder, ‘Did this really happen?’"

Because the film takes place in both 1973 and 2004, the alternating time periods required alternating visual styles and technology. Creating the authentic feel of a documentary, particularly one shot by a film student, posed the biggest challenge to Sniffen. "NOVEM" was shot in two formats, HD for the modern day documentary and 16mm for the 1973 films of the music sessions. "My challenge with the 16mm stuff was not to make it look too slick or the camerawork too slick. It had to look like a somewhat inexperienced kid was shooting it, but it also had to be watchable by an audience."

To further simulate the spontaneity of action and dialogue in documentaries, Kimmel did not write a script, but instead created a storyline and relied on the improvisational abilities of his actors and crew. When casting, he looked first for actual musicians and then improvised with them to see who could act as well. According to Sniffen, "When we were shooting different scenes, I’d ask Brad, ‘What happens in this scene,’ and he would go, ‘Oh, I don’t know.’ He would purposely not tell me what was going to happen so that I would be surprised when it did, so that I would have to find the shot just like the kid would who was shooting the film."

The documentary feel was enhanced by Kimmel’s insistence that they shoot the 1973 six-day recording session in six days. The cast of musicians also wrote their own songs, just like their characters in the film. The original music plays as big a role as the visuals in the film and is really a character itself, helping to embellish and enrich the story. Each song offers the modern day college students an in-depth glimpse into the life of the person who wrote it and the relationships between the band members, ultimately reinforcing the power of music to form links between generations.

Sniffen believes that through all the elements of casting, improvisation, visual style, and soundtrack, they were able to achieve the authentic look they were striving for. But don’t take his word for it. For confirmation, look to the venerated and well-respected Sundance Film Festival selection committee, who has seen plenty of films over the years. "We sent it to Sundance and they wrote back, ‘You’re in the wrong category. It should be in documentaries,’" laughs Sniffen. "They couldn’t believe it wasn’t a documentary." Although it just missed the cut for Sundance, "NOVEM" won the Audience Award for best feature and best soundtrack at the Phoenix Film Festival. Sniffen hopes it will find its way into theatrical release in art house theaters. "If somebody was smart, they’d market it as if it were real."

Since "NOVEM" finished shooting in 2004, Kimmel, Sniffen, and "NOVEM" sound man, Stuart Benson, an East Longmeadow, Massachusetts resident, have teamed up again to produce a sitcom, "Texas Hardtails," set in a motorcycle shop and starring the shop’s actual owners. Sniffen will also be a judge at the HD festival in New York for the second year in a row, and is pursuing work on other independent films. But his long-term aim is to develop his own feature project, ideally shooting and editing it all in-house.

"Film is my first love. Feature films are wonderful, but they also pull you out of the loop of your normal paying business. You have to pick and choose, because if you’re going to put in the effort, you want it to be for something good." He works often in HD, and though he acknowledges that the casual viewer doesn’t see the difference between HD and film nowadays, industry people can tell. "Film still is softer and warmer and has a richer picture," he says. But with new advances in technology every day, Sniffen predicts "in 10 years, anyone shooting film is a holdout. Digital is taking over, and even in five years, most mainstream films will be digital."

"Technical advances have made it easier for kids to make films these days, but the problem is they want to make films before they even know how to make a film. In the end, the [technical side] doesn’t matter, because you have to have a good script and good acting. Otherwise, the film won’t be good. If the story and the acting are good, it could be shot on DV and people would enjoy it."

And it was the story that first attracted Sniffen to "NOVEM" while listening to Kimmel’s description over the phone. And it is the acting, musical performances, and visual style that has created an engrossing and endearing film. "It’s offbeat and appeals to both the college crowd and people in their 40s who grew up with the kind of music the band plays. You really have to buy into it to like it. As long as you go along for the ride, you end up feeling for these kids, and you want them to be real."