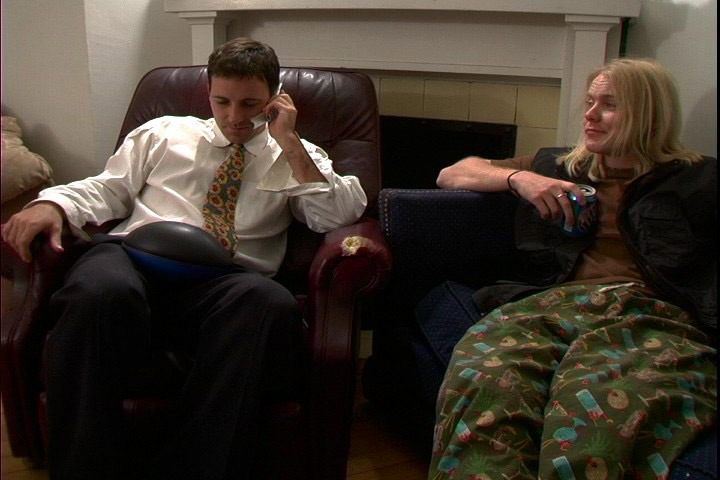 What would you do if you got fired? This is exactly the question that co-directors Josh Mitchell and Patrick Ryan explore in their latest short film "Life Coach."  The film follows a laid-off file clerk who reinvents himself as a famous ‘Life Coach’ named Sebastian Starr, and unwittingly sets off a string of comedic complications.

Selected to compete in this year’s Haydenfilms Film Festival, "Life Coach" is one of 36 films currently available for free online member viewing and voting at www.haydenfilms.com now through October 30, 2005. The top four filmmakers will have their films shown during the winner’s ceremony in November, and the filmmaker with the most online votes will receive the grand prize of $10,000.

NewEnglandFilm.com recently spoke with half of the Boston’s Wickid Pissa Films team, Josh Mitchell, to learn about the making of the film.

Michele Meek: What was your inspiration for the short?

Josh Mitchell: We wanted to explore the strange occupation of being a "Life Coach." This job really exists and we thought it was packed with potential for humor. The idea that someone dissects your life as a therapist, friend, spiritual advisor and then helps you become a better you intrigued us.

MM: How do you work with actors? Is everything scripted or is there some improv?

Mitchell: Every piece of "Life Coach" was improvised. We work the same on all of our projects. We come up with a foundation of a narrative and then just run with it. We know where we need to go but we don’t script anything. We help guide the actors with what needs to be accomplished in a certain scene but give them a lot of creative freedom to come up with something fresh and authentic. That usually is where the magic happens — in that raw and organic way of performing.

MM: How did you find out about the Haydenfilms Film Festival?

Mitchell: "Life Coach" has played at various film festivals across the U.S. and Haydenfilms got exposed to us from Filmmaker Magazine. This is their first annual online festival.

MM: I read a bit about some of the creative ways you’ve come up with financing your films. Can you talk a bit about that?

Mitchell: We self-finance our films by holding promotional events, having yard sales, selling collectibles, and by getting small investors involved. Fortunately, we are a two-man production crew. We do everything ourselves so we don’t need a huge nut to pay gaffers and sound people. We are skilled and hands-on enough to be able to be autonomous.

MM: What keeps you in Boston?

Mitchell: We love Boston and believe in the potential of the city to become a gem in the indie film world one day. We’ve done LA and Austin, TX and find ourselves always setting up shop in Beantown. It’s stacked with great colleges, monumental architecture and unique, passionate people.

MM: Any projects in the works you want to talk about?

Mitchell: I just finished a high-concept horror script and we’re developing a children’s film that we have been kicking around for a few years. We’re trying not to pigeon-hole ourselves with a certain genre. We want to tell an assortment of diverse stories for all types of demographics.

MM: I love the song at the opening — "Start Wearing Purple." How did you find it?

Mitchell: We are always searching for great musicians with a cinematic flavor and through a few connections we reached out to The Knitting Factory in NYC and they turned us on to Gogol Bordello, the creators of "Start Wearing Purple." We instantly responded to the catching chorus and knew we needed to use it in one of films. Luckily, it fit with the vibe of the story of "Life Coach" and helped set the stage as an opening credits sequence.

MM: What do you think about wearing purple?

Mitchell: We think purple worked nicely for Grimace and Tinky Winky but we usually look better in beige.

You can watch all of Wickid Pissa Films on the website: www.myspace.com/wickidpissaboston

You can watch all of Wickid Pissa Films on the website: www.myspace.com/wickidpissaboston They are all also distributed by www.ifilm.com and www.undergroundfilm.net