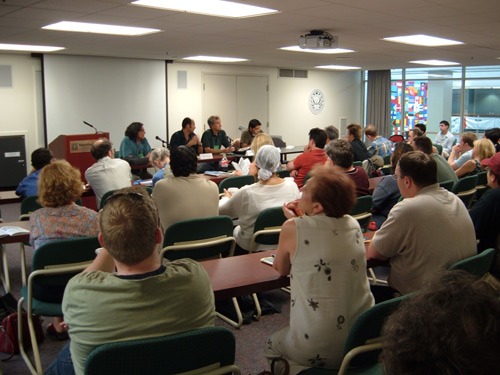 Share
A report from the first-time Boston Filmmakers’ Expo hosted by Filmmakers Collaborative in June.

On June 9, 2005, at Northeastern University, something happened in Boston that might never have occurred before. Though not quite as momentous as the Boston Massacre or a World Series Championship, area filmmakers, cinephiles, and students gathered for the first Boston Filmmakers’ Expo. The Expo was a tremendous success and should spawn an annual event that will grow stronger with each passing year.

The Expo was sponsored by the Filmmakers Collaborative. The ‘Collaborative’ is a non-profit association of Boston-based independent filmmakers that was founded in 1986. According to a release, "the Collaborative supports independent filmmaking in Massachusetts by sponsoring film and video projects, offering learning opportunities and a collaborative environment for experienced and emerging filmmakers, and educating the public about films and the filmmaking process." The June 9 Expo accomplished this goal on a large scale.

Dozens of companies, organizations, and universities were on hand with booths and hi-tech equipment. From equipment suppliers such as Rule Broadcast Systems to content providers such as WGBH to Moody Street Pictures, the LEF Foundation, the Massachusetts Production Coalition, Boston University, and many others, the latest in goods and services were on display in the Expo’s main room where hundreds of attendees congregated and networked.

Another key feature of the Expo was the many panels and discussions led by seasoned filmmakers. In one room, aspiring documentary filmmakers showed clips of works in progress and received feedback from experienced documentarians. Another panel explained the process of raising funds to make films and fielded questions from the audience. The latest in editing techniques, how to make a film trailer, crafting successful proposals, and obtaining distribution, among many other forums, were also offered to Expo attendees.

The Executive Director of the Filmmakers’ Collaborative and one of the Expo’s key organizers, Bonnie Walch, said, "It seemed to me that the Expo was a big hit — the feedback was, generally, extremely positive. People seemed to really appreciate the chance to hear special guests impart their experiences and knowledge. The wide variety of panels and seminars enabled many to learn about a range of filmmaking topics. The Expo was also a great opportunity for attendees to see old friends and colleagues and network with new ones."

One of the high points of the day was the keynote speech delivered by Geralyn Dreyfous, Executive Producer of the Academy-Award Winning Documentary "Born Into Brothels." Dreyfous, through her work at Harvard’s Kennedy School of Government (as well as being a Harvard graduate), became an adept fundraiser. In 2002, as a Salt Lake City, Utah resident, she founded The Salt Lake City Film Center and has produced a number of fine films including the highly acclaimed "Born Into Brothels." She spoke about her experiences as a documentary producer and the exciting story of the events that led up to winning the Academy Award. She also shared strategies for fundraising and how to capture wider audiences for documentaries. She illustrated her points by showing clips from "Born Into Brothels" as well snippets of her upcoming documentary "Doctors Without Borders."

Most telling were Ms. Dreyfous’s comments about documentaries and the film business in general. She stated, "The lines between documentaries and features are blurring. Documentaries are in a golden age and it is exciting to be a part of an era where so much is changing. Technology, narratives, and music are being used in new ways in documentary storytelling and the results are compelling stories told imaginatively and boldly."

Other featured participants of the Expo were Judith Helfand, Producer of "Blue Vinyl" and Co-Founder of Working Films, Julie Mackaman, a Media Arts Consultant and Grantwriter, Fernanda Rossi, the ‘Doc Doctor’ columnist for the AIVF Independent, and Paula Silver, the Marketing Specialist for "My Big Fat Greek Wedding" and President of Beyond the Box.

Panelists and attendees alike praised the Expo. Fernanda Rossi described the event as a model of "grace and efficiency." One attendee characterized the Expo with the following words: "It was so refreshing to meet and talk with other area professionals. I truly enjoyed the opportunity to listen to the panelists speak. I reconnected with old friends and met new ones. The keynote speakers were terrific and the panelists were dynamic, engaging and knowledgeable."

Ms. Walch sees a bright future for the Boston Filmmakers’ Expos, "I’m already starting to think about next year’s Expo and have a lot of ideas," she explains. "I think what worked best this year is bringing in very high-quality presenters — people from L.A. and New York whom the Boston community doesn’t often have the chance to meet and learn from. Also, I’m interested in trying the ‘inch wide, mile deep’ model next year — that is, cover fewer topics but give attendees opportunities to delve into them deeper by having break-out focus groups after a panel. I’d also like to have representation from distribution companies next year and perhaps set up a mini-marketplace where filmmakers and distributors can meet. I want filmmakers to come away from the Expo really feeling like they got something valuable out of it that they can apply to their work."

Who knows — in years to come the Boston Filmmakers’ Expo could be as widely known and as prominent as clam chowder and Beacon Hill. The filmmakers of Boston and New England, as well as film hungry audiences in the region, will certainly benefit from annual events of this sort.