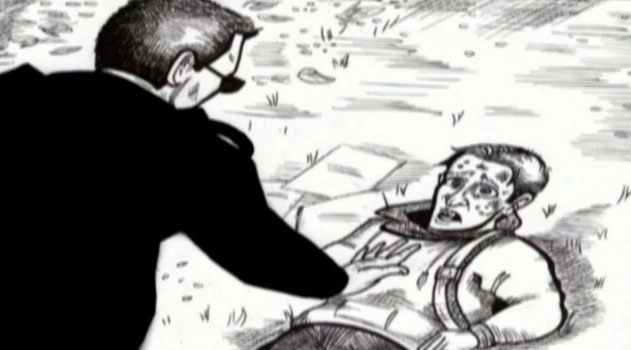 Look at the horizon and rising high in the sky is one of Boston’s and New England’s newest talents in motion picture production, Joe Gatto who helms Liquid Lunch Productions. Gatto is an Arlington, Massachusetts native who always had a love of film. After spending some time in Berkley, California and making a variety of short films there, he returned to New England several years back to launch Liquid Lunch Productions.

"I never really wanted to work for anyone else," Gatto explains, "I always wanted to form my own company and bring together a team that I could see working with on many projects." Hence, Liquid Lunch Productions was born and includes a seasoned team of producers, editors, and actors.

Gatto and Liquid Lunch wasted no time in making a hard charge into the world of feature film production. The company’s first film, "Overserved," premiered in April of 2004. Shot digitally for about $11,000, the raunchy comedy never relents. It’s not for the faint of heart but has big laughs as it explores the relationships and antics of bartenders and waitresses working at a local watering hole.

"Overserved," in which Gatto also appears as the lead actor, has played in a number of film festivals and earned several awards along the way. Festivals where the film has been screened include Houston’s Laugh is Hope Comedy Festival, the Boston Comedy Festival, the Boston Underground Film Festival, and the Long Beach Comedy and Film Festival. Perhaps even more exciting than the screenings and the accolades is the recent news that "Overserved" has secured a distribution deal through DigiWorld Studios. "Overserved" will be one of the first films to be exhibited digitally in theaters and could be seen at as many as 3,000 sites when it is released in the summer of 2006. DigiWorld will also be bringing "Overserved" to this year’s Cannes Film Festival with an eye on securing foreign distribution.

Gatto and his team have not reveled in the success of "Overserved" for long. They went right back to work to make the short film, "Number Two Pencil." The 35-minute short (made for just $1,500) tells the tale of Marty, a boy who’s intimidated and bullied daily but finds catharsis in drawing and inward exploration.

"Number Two Pencil" has already shown in this year’s Boston Underground Film Festival, but on May 24 at the Paradise Rock Club in Boston, Liquid Lunch Productions will hold an official screening which is also designed to be a fundraiser for future productions. This intriguing approach to fundraising could well be a model for a new generation of independent filmmakers.

"We did the exact same thing for ‘Overserved,’" says Hilary Barraford, one of Liquid Lunch’s co-producers. "We screened a short film and raised a portion of the money we needed to make our feature. We were able to show our work and get filmmakers and supporters together. It worked out well for everyone involved. We’re hoping the May 24 screening of ‘Number Two Pencil’ will be a similar success." Indeed it may be, for along with the showing of the film will be the stand-up comedy of Comedy Connection regular Lamont Price and the dark, edgy songs of Danvers, MA band Cherry S/T. The Paradise can support about 700 entrants, and Liquid Lunch expects to sell out the evening’s entertainment.

Gatto and Liquid Lunch hope to repeat the successful formula that saw "Overserved" produced. With a portion of the funds raised on May 24, the company will immediately embark on its next project. This time, however, Liquid Lunch is setting its sight — and budget — a little higher. "We feel we are in a better position now," Gatto states. "We’ve produced a feature-length film that has distribution and some acclaim. For our next movie, we’re aiming for a budget of between $500,000 and $1 million, which we think could go a long way toward attracting name actors and actresses."

Liquid Lunch Production’s next project is titled "Conundrum" and is a suspense-thriller that is "Sophie’s Choice" meets "Scream," as Gatto explains it. "Conundrum" is the story of two teen girls camping out in their backyard and telling each other ghost stories. Suddenly, they are kidnapped, and their mother must come to their rescue and make a startling choice about which one to save. With the funds raised from the screening of "Number Two Pencil," Gatto hopes to shoot 10 to 15 minutes of "Conundrum" on high definition. With the intro piece and the full script, Gatto will then approach investors to secure the full budget. To attract even more attention to the project, Liquid Lunch plans to host an open casting call for the parts of the two girls.

Gatto and Liqud Lunch have a number of other projects on their slate and don’t appear ready to rest for a minute. "We love to entertain," Gatto says. "I’ve always been fascinated by the movies ability to make people laugh and scream, and Liquid Lunch Productions exists to do just that." The script Gatto wishes to produce after "Conundrum" is titled "Mini Balls": Gatto’s hilarious take on the world of professional mini-golfing.

Looking back to the horizon, Gatto and Liquid Lunch Productions can be seen almost everywhere on the local film scene. Whether it’s at the Paradise, the Boston Underground Film Festival, or even next summer on the big screen in the Cineplex, keep your eye out for Joe Gatto and his filmmaking troupe.