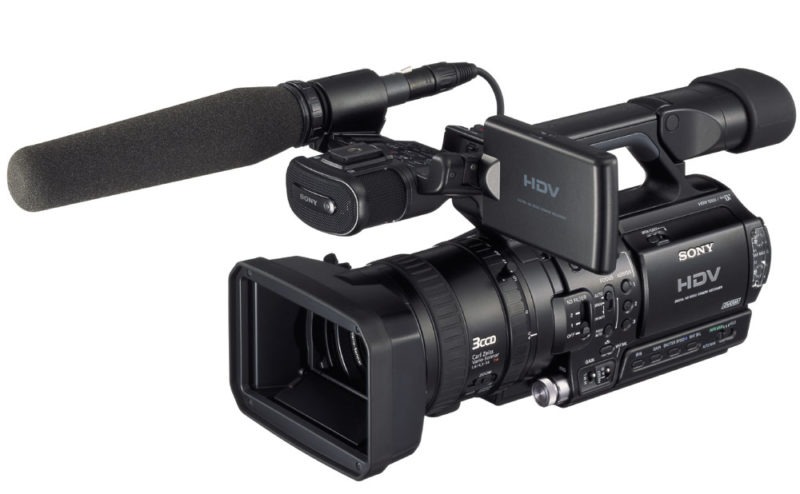 Share
A review of Sony's new HVR-Z1U camcorder -- the company's first attempt at a compact, cost-effective camera that enables HiDef on a standard DV cassette

To bridge the gap between consumer and professional video cameras Sony has created the HVR-Z1U camcorder. It is Sony’s first attempt at designing a compact, cost-effective camcorder that allows HiDef acquisition on a standard DV cassette using the newly introduced HDV format. Aimed directly at the filmmaker, event video producers and news videographers, the Z1 is packed with the widest array of professional features all within a small, prosumer package priced at under $5,000.

Before we get into what HDV is and what it has to offer, let’s go over the DV formats most of you may already be familiar with. First came DV (also known as miniDV and formerly as DVC). Many manufacturers released their first DV camcorders in 1995 (e.g., Sony, Philips, Thomson, Hitachi, Panasonic, etc.). It was the first digital recording format available to consumers. It provides a nearly lossless broadcast quality picture. Panasonic then released a professional format that they named DVCPRO. Then came Sony’s answer to DVCPRO, a more robust version of DV that they called DVCAM. All of these DV formats record video in Standard Definition at a resolution of 480 lines interlaced (480i). We now arrive at the HDV format. HDV is the video format that has been created to meet the industry demand for an entry-level path into the HDTV world. This format provides about double the resolution of standard DV formats mentioned above. The specifications allow for the capture of video in High Definition at either 1080 lines interlaced (1080i) or 720 lines progressive (720P).

With the introduction of HDV, HiDef is no longer restricted to high-end, big-budget video production. It is quickly becoming a necessity rather than a luxury at every level of video production. With more and more consumers buying HDTVs, the demand for HiDef content for both broadcast and private viewing is rapidly increasing.

So, along comes Sony who designs what appears to be the perfect HDV camera that they call the HVR-Z1U. One can say that the Sony Z1 is the camera that everyone has been waiting for. The recording and playback format is switchable between HDV, DVCAM, and DV, which provides maximum flexibility to record in either High Definition or Standard Definition mode depending on what one’s production needs are. It provides true 16:9 imaging in both HD and SD formats using its native widescreen chips. The camera can also downconvert the HDV 1080i captured video footage to Standard Definition video and output the signal through either its IEEE-1394 (firewire) connector or its analog component connectors.

The Z1 features what Sony calls Cineframe. The Cineframe feature reproduces picture movement like 24fps film in HDV, DVCAM, and DV formats. When Cineframe is combined with the camera’s Cinematone Gamma feature, a film-like look is achieved. .More on this in a moment.

Some of the key features that the camera includes are a flip-out 3.5" 16:9 LCD screen, manual iris control, Zebra pattern, color correction, SMPTE timecode, and assignable buttons for a wide array of functions. Understanding that audio is important to videographers, Sony also included two XLR input connectors with independent audio record level controls in addition to the built-in stereo microphone. Combining all of the camera’s features with HiDef picture quality that the HDV format provides, the Z1 is the perfect video acquisition tool for a variety of applications both for today and tomorrow. With vendors quickly coming out with aftermarket add-ons for the Z1, you can easily rig up the camera with a wide angle lens, follow focus, matte box, etc. which will allow you to use the camera in a way that a film camera or high-end HD camera would normally be used.

We tested the Z1 and compared it to the popular Sony PD170 and the Panasonic DVX100A to see if the picture quality was that much better than DVCAM and DV and also if the 24fps function (Cineframe) equaled or bettered that which the DVX100A could provide. There is some good news and some bad news.

First, here’s the good news. We recorded some footage in the HDV format and played it back in HiDef straight into an HD monitor. What we found is that the quality easily exceeded anything that the PD170 and the DVX100A could possibly provide. But here’s what really astounded us. When we downconverted the HDV footage from HD to SD, the quality of the SD signal was noticeably better than the original footage shot on a PD170. We then switched the camera to DVCAM mode. We shot similar footage and when we reviewed the results, we were again shocked to see that even when used in SD mode, the recorded video looked better than what the PD170 and the DVX100A provided. Because of the megapixel chips that the HDV camera utilizes, you are essentially getting a supersampled image when recording in DVCAM or DV mode!

Now, here’s the bad news. When we put the camera in the 24fps mode, we were disappointed at how poorly the camera’s film-like look appeared. It was nowhere close to the look that the DVX100A’s 24P mode provided.

So where does that leave us, you ask? Well, if you want the resolution of HD but don’t want to give up the film-like look that the DVX100A provides and don’t have the budget for a high-end HD camera, you have two choices: You can digitize the HDV footage and run it through software to achieve a more realistic 24fps look than what the camera can provide OR you can wait and see what other manufacturers have in the works and hope that they can fill the gap that Sony has left.

Well you may not have to wait too long because while Sony was busy designing the Z1, the other video equipment manufacturers weren’t sleeping. JVC, a member of the HDV consortium, has recently announced the latest addition to their camcorder lineup – the GY-HD100U shoulder mount HDV camcorder with interchangeable lenses. JVC has badged their HDV products "ProHD." Their camera captures in 720P, and using enhancements to the HDV format allows for acquisition in true 24P, the 24fps format that independent filmmakers use to make digital video look more like film. JVC’s camera is slated for release in the summer of 2005. Panasonic, who’s not part of the HDV consortium, isn’t sitting back and letting the competition take the entire market share in cost-effective HiDef video acquisition. Recently introduced at NAB 2005, the Panasonic AG-HVX200 provides 1080i/720p HiDef recording with the image quality of DVCPRO HD compression, the same format that their acclaimed VariCam uses, on solid-state memory cards which Panasonic has badged "P2." It is also able to record Standard Def DVCPRO50 / DVCPRO / DV. All 1080, 720, and 480 signals that the camera is capable of recording support 24p and 30p frame rates. Panasonic’s camera is slated for release in the fall of 2005. With low-cost and high picture quality, these new cameras will be a catalyst that sparks many to jump over into the world that is HDTV.