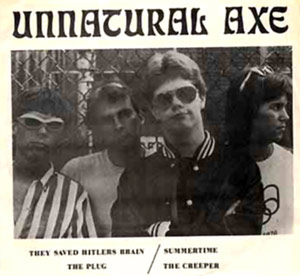 Share
Punk music and indie filmmaking are perfect bedfellows in their quest to stretch boundaries of personal expression and creativity. Two new films, screening this month, by Boston area filmmakers explore the similar motivating spirit behind both these genres.

Out of the mainstream.  Rebellious.  Pure emotional expression unbound by convention or tradition.  Sometimes loud, sometimes dangerous.  Always original.  These are all apt descriptions of both punk music and of independent filmmaking.  In April at the Coolidge Corner Theater, these two genres come together to both illustrate and reflect one another in two new documentaries by local filmmakers, Tommy White and Marissa Acosta.

Both films will screen as part of the Balagan series, a series devoted to showcasing alternative and experimental films and videos by local artists. "You’ll Pay For This," by Tommy White, chronicles the Boston punk band Unnatural Axe, which he co-founded in 1977. "The Late Risers Club," by Marissa Acosta is a look at radio station WMBR’s seminal alternative music program.

In 1977, while studying film and video at Emerson College, Tommy White and his Dorchester buddy, Richie Parsons, decided it would be fun to make a film about forming a rock band.  They shot the film in Richie’s basement, and the footage is the unintentional genesis of what would, 28 years later, become "You’ll Pay For This."  Shortly afterwards, unbothered by the fact that neither could play instruments, White and Parsons formed Unnatural Axe, a local punk favorite.

The basement footage opens "You’ll Pay For This," a compilation of videos of Unnatural Axe songs and interviews with original band members, White, Parsons, and Frank Dehler.  Although the band broke up after three years, they continue to reunite for one or two gigs a year.  It was only after other artists started recording Axe songs and a compilation CD released in 1997 sold out that White, a freelance videographer, realized there was a huge interest in a video about the band, an idea he had toyed with as far back as 1983.

"I had stacks and stacks of tapes and decided to do something with it," says White.  "I had a great handle on what existed, that I don’t think anybody else would really have been able to keep that archive in their head as well." Since the band’s formation, White and friends had been shooting footage of concerts, backstage antics, and tours in Detroit. White managed to track down most of the footage, which existed in a wide range of formats, from Super8 to 16mm to reel-to-reel to low-8 video.

The challenge came in matching up all the footage, some of which was not in great condition.  "Some of the tapes were popping off reels when we rewound them, so we would Scotch-tape stuff back onto the hub and make a Beta copy before the tape gave out," laughs White.  He eventually bumped everything up to ¾" and had a friend at Emerson do enhancing and color correction. "A lot of the money was spent just on refurbishing the stuff," says White.

White originally conceived the film as a string of Axe videos cut to their songs, but realized this might seem interminable and decided to use modern-day interviews and other footage of the band as interstitials.  "With Richie and Frank’s interviews, I managed to work in a story arc, kind of a backbeat going that worked for me.  I used Riche’s stuff to lock the film together from beginning to end."

With all the accessible footage, editing was White’s biggest challenge.  He decided from the start to let each song play in full and to give each video its own style.   "I made ten versions of each song before I got something really good.  My wife was the voice of reason. She would send me back into the basement if things weren’t good enough."  The result is a clever mix of band footage from past and present intercut with archival material, stock shots, and super8 film and video White had shot over the years.

"The best part was finally getting it done," says White.  "I kept worrying, thinking I’m going to die before the movie is done. I said to my wife, ‘Please, honey, get someone to finish the film!’"  Six years after he began the project, he and the band members are happy with the results.  "I didn’t know the band was this good," jokes White. In fact, White received a Telly Award for the very moving video of "The Man I Don’t Want to Be," from the film.

At an hour long, White says this is the longest and best produced film that’s he’s made.  He shot YPFT for only $6,000, mostly out of his own pocket, a budget inspired by director Robert Rodriguez’s chronicle of making "El Mariachi."  Following Rodriquez’s advice, White decided to "see how much you could crank out for nothing," using only himself as crew.  "I held up the camera and that’s it."

He did not follow the advice, however, of a film festival book that warned filmmakers to avoid "making films about your 20-something drinking friends," says White, laughing. "But I’ll just see where this goes.  Plus, it’s something that’s close to my heart."

From that first basement video in 1977, it is not a far leap to the concept of "You’ll Pay For This," still, in its heart, a film about forming a band.  And the spirit of two guys who couldn’t play instruments deciding to form a band, learning how to play as they went, is not a far leap from the spirit of indie filmmaking.  As White aptly puts it, "Indie film production is like today’s punk."

In "You’ll Pay For This," there is some interview footage of the band shot by Cambridge filmmaker Marissa Acosta, who was interviewing Unnatural Axe for her own first documentary, "The Late Risers Club," a film about WMBR’s long-running radio program, which influenced Tommy White when he and Richie Parsons were forming their band. Begun in 1977, the program showcased punk and alternative music, and was a forerunner of what we now consider college radio, one of the few noncommercial stations in the country at that time championing unheard of bands, both local and national.

"I made this film from two perspectives," says Acosta, "a filmmaking perspective and me being a fan of radio.  Both came together and compelled me to make a documentary about this radio show that I’ve been a fan of since I got here."

She got here in 1993, "escaping from Alabama," to be a math major at MIT.  Listening to WMBR was her first exposure to non-commercial radio, an ear-opener for Acosta.  "Non-commercial radio isn’t very prevalent in Alabama, so it fascinated me from the beginning.  When I started listening to WMBR, it was the way I got to know about the bands in the area.  I never got that in Alabama.  It was all mainstream music, and here I learned there are real people who make music."

In addition to opening her ears to new musical genres, MIT also opened her eyes and mind to something she had never before considered a topic of study: film.  Thanks to a class in French cinema Acosta saw film as something other than what was playing at the local cineplex. "I’d never looked at films as pieces that we could talk about and be educated about, talking about the construction of a film.  I realized there are other ways to make movies."

After graduating, Acosta interned and worked part-time at Cambridge Community Television (CCTV) to learn the nuts and bolts of video production.  Still an avid fan of Late Risers Club and its DJs, Acosta decided she needed to make a film about the program that had had such a profound influence on her perspective.

Never having made a film before, Acosta had to learn the process from scratch. "When you first start the process, you get all these ideas and you get real excited about them.  So first of all, it was mapping the ideas and actually organizing them and figuring, how am I going to do this." Since she had no money, she e-mailed CCTV contacts and put an ad on NewEnglandFilm.com and wound up getting 40 volunteers and a quick lesson in coordination.  "I just realized that organization is key.  I would just assign them each a little task rather than one big task. You don’t want to overwhelm them.  Being the person who coordinated different shoots in different cities, I had to do it by myself.  So it was a very good experience."

Part of the attraction of the Late Risers Club for Acosta was the diverse and "endearing" personalities of its DJs. She researched the program’s history and tracked down a lot of the original DJs.  She traveled around the country, interviewing former and current DJs, listeners, music writers, and the bands that were featured on the show to produce "an interface between the whole listening experience." In the process, she discovered the wide-reaching impact of the show. Acosta uses a mix of interviews, archival films and photos, and the original audio of the DJs to create her "historical ode."

Acosta found the experience of shooting her first film to be both enjoyable and valuable.  For one thing, she learned how to do interviews, a prospect which at first unnerved her.  "I didn’t know how to do that.  But after 40 interviews, it’s now second nature."  She also discovered one of her favorite parts of the filmmaking process is editing. "After the shooting, now it’s time to see how you can make things fit together and add that oomph at the end.  There’s so much potential with everything."

In addition, she has gained a newfound appreciation for documentaries. "I like the motivation behind documentaries. I like that there’s an actual story that has happened in real life, that somebody’s trying to expose those events and educate people." Currently, she is working on expanding her 30-minute film to an hour, to include more recent history of the Late Risers Club. As for the future, she’d like to learn more about the business side of filmmaking. "I realize that now that I made a film, how do I get people to see it and how do I get people to finance my next project? I know [the business side] is a lot of work, but I’ll hope that at the same time I’ll still be able to focus on the actual creative side."

The rebellious sensibility of punk, its motivation to express oneself and pursue an artistic voice without commercial or societal constraints, and the supportive community that surrounds the creative artists is richly illuminated in "You’ll Pay For This" and "The Late Risers Club." This punk sensibility is a direct mirror of the spirit of independent filmmaking, a spirit that propelled both these filmmakers to grab a camera, grab some friends, and create a vision close to their heart.