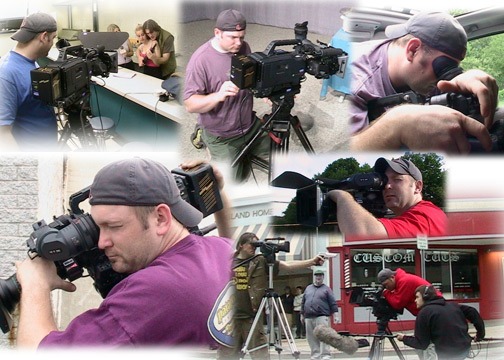 How to Be a… Director of Photography

Share
The Director of Photography ('DP') determines the composition, exposure and lighting for a film.  Massachusetts based DP Jake Messier explains what it takes to turn the story of the script and the vision of the director into the visual art of the film.

When Jake Messier talks about his life and career as a Director of Photography (DP), he is quick to point out, "I didn’t become a DP in the usual way."  By this he means that he did not go to film school or work his way up from a Production Assistant, instead he joined the Marines.

Messier was in his junior year of college, majoring in education, when he decided he didn’t want to spend the rest of his life in a classroom.  In the Marines, Messier became a combat correspondent and was trained in journalism and electronic news gathering.   "I spent nine years in the Marines," he says "and almost that entire time as a videographer.  That’s where I learned the art of shooting and honed my skill as a shooter."

He then worked for two years as an Assignment Editor for a news station in Boston, but he missed the hands-on work.  In 2002, he began working for the Air Force Research Lab in Bedford, MA making promotional videos to publicize the work of the lab.  As the first person to hold the position he was allowed to purchase whatever camera and editing equipment he needed to do the job.  He still works there full time and says, "I’m a ‘one-man band’ — I shoot and edit everything myself."

In 2003 Messier answered a classified ad (on NewEnglandFilm.com) for a cameraperson for a short called "Entering Acton."  At the time, Messier had experience and lots of news footage he had shot, but no reel to show.  "The director, Randy Marquis, said to me, ‘If you’re good enough for the government, you’ll be good enough for me," Messier recalls.  He also remembers his first day jitters.  "I had been working with cameras for eleven years, but I was so nervous," he says. "Then I got there the first day and I said, ‘Oh, I know how to do this, and it went really well.’"

When the shoot was finished, Messier decided that he wanted to do more feature film work, so he purchased a video camera (a Panasonic DVX100A), a small light kit, light meters and filters and looked for jobs.  He has had steady work since then, including doing camerawork on two feature films shot in New England: "Feeding the Masses" and "You Are Alone."

Jake Messier says his own perception of a Director of Photography is "taking the director’s vision and the screenwriter’s vision and applying it to the science of photography."  Here, he offers this advice to those interested in the field.

Try to get it any way you can.  Start as a Production Assistant in the camera department to learn "the lingo" and what goes on during the shoot.  On low-budget films, promotions may come quickly.  Messier says that they had one PA in the camera department on "You Are Alone" who was working so hard for so long that they promoted him to Second Assistant Camera.   You will still be doing a lot of equipment carrying and other grunt work, but you have a new entry for your resume.

The First Assistant Camera makes sure there is power to the camera, assures that the videotapes are ready to go, moves the camera from position to position and maintains focus during camera moves.

The Camera Operator is the person who actually shoots the footage with the camera.  On a smaller production the Camera Operator or "CO" and the DP may be the same person.  Messier says, "As the CO, you don’t have control over shots, it’s someone else’s idea and you just execute it."

The Director of Photography is the head of the camera department and whether or not he or she runs the camera is a matter of personal preference and ability.  "Some DP’s don’t operate the camera, they sit behind the monitor with the director and watch camera angles and lighting," Messier says.  "I’ve known DP’s who aren’t successful COs," he says.  When the team works well together, they often stay together and Messier says that some DPs have had the same CO for years.

"Ideally, the DP hires the rest of the camera department," he explains.  "If you travel, though, they hire local people but you’ll get the final say."

Let There Be Light

"Ultimately the lighting is the DP’s responsibility," Messier says "You have to learn how to control and manipulate light."  While he was in the Marines, Messier went to the Sony Lighting School in Los Angeles.  He says it was a valuable experience but in the end, practice is the best teacher.  One way to gain introductory experience with lighting is to be a PA for the Gaffer, who is the head electrician on set and hangs all the lights.  Then Messier suggests trying to get an assistant gaffer spot on a larger shoot.

On big budget productions there may be a Lighting Director who has the experience of a DP with lights, but not the camera experience so the DP’s insight and knowledge will still be needed.

Listen and Be Heard

Communication and mutual respect between the DP and the director are the keys to a successful collaboration.  "With indies, the directors are intimately connected to the script," Messier says.   "They often have the film shot in their head and the DP may have a different film in mind."  Messier feels that directors must be willing to listen to the DP’s ideas.  "All I care about is being heard.  If you [the director] don’t chose to do it, at least listen to my opinion."  He takes his own advice as well.  "The DP needs to listen to the camera department because younger people may have good ideas."

Even though he has never taken a film production course, Messier did finish his undergraduate degree and is currently pursuing a Master’s Degree at Harvard University in Studio Art and Film Studies.  He also teaches an undergraduate course in Field Production at Northern Essex Community College in Massachusetts.

In addition to his full-time job, Messier has begun work as the DP of a feature length documentary on the Station Nightclub Fire in Rhode Island, and will direct and shoot a music video for the band Mars Hill this summer.

According to Messier, all the skills needed to be a good DP cannot be learned, "You have to have an eye for photography, but you also need the heart for it."  Like any job, the work of the DP can have its frustrations, but Messier says, "When it’s good, it’s really good.  You feel your heart skip a beat when you see it’s in perfect frame, perfect focus and you think ‘I nailed it.’"  Jake Messier is a prime example of how doing things the "wrong way" may lead you just where you want to be.