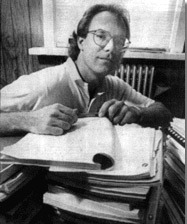 Share
Screenwriting instructor and agent Garret C. Maynard gives NewEnglandFilm.com readers the inside scoop on how to write a great screenplay and other tips from his workshop being held this month.

Garret C. Maynard saw "Lawrence of Arabia" in 1963 when he was just three years old, and he was hooked. His love for storytelling and film developed as he continued to watch the "emotionally and politically charged films" of that era, but it wasn’t until he read the biography of Jim Morrison at age 22 that he was inspired to become a filmmaker himself. Following in the footsteps of Morrison, who had been a filmmaker before he became a rock-and-roll icon as The Doors front man, Maynard decided to attend film school. After spending his first semester at the UCLA School of Film and Television, he realized that he needed a more technically focused course of study and transferred to the USC School of Cinema.

Since graduating in 1987, Maynard has been a man of many hats. A screenwriting instructor at Wesleyan, Sacred Heart, and Yale universities, Maynard also operates the Gary-Paul Agency where he acts as a script editor, literary agent, and runs Writing and Promoting the Screenplay, a two-day screenwriting seminar. All of this is in addition to his own work as a documentary filmmaker, cinematographer, editor, and screenwriter.

The material Maynard teaches is nothing new, but his approach is unique. During his seminars, he focuses on one-on-one attention, believing this gives students the edge they need. With a class limit of generally 8 or 9 students, Maynard is able to teach the general principles of screenwriting, and each student is able to apply these principles to his or her own screenplay during roundtable discussions and Q&A sessions. Students leave the seminar not only with the fundamentals of good screenwriting, but also with the ability to incorporate these ideas into their own story. He does not limit his instruction to the classroom and will invite students to his home in Connecticut, or he will go to students’ homes himself. Writing groups go up to his house in Vermont to work in what he sees as an "idyllic setting" for a writer. A few of his students have taken his seminar as many as five, six, or seven times.

Maynard stresses to his students, "introduce yourself to your own belief system." Doing so gives students a good foundation for drawing meaning from their story. Without a clear idea of what is motivating their writing, students may "go off in a direction that confuses them, and the story becomes superficial." Once students have taken what Maynard refers to as "personal inventory," they can focus on the more basic fundamentals of telling a good story; namely, having a clearly defined and motivated protagonist and antagonist and giving the protagonist clearly defined internal and external goals.

Many first-time screenwriters try to focus on more than one main character, and they start writing before they know the internal and external goals of their characters. Maynard suggests always focusing on only one main character, and he gives his students exercises to do before they start the actual writing process. Students begin with a three-page outline. Page one of the outline describes what happens from the first page of the script up until the first plot point. Page two takes the story up to the second plot point, and page three outlines the climax and resolution. He has his students stay away from a treatment, believing this is for more advanced writers, and instead has them make up a scene list where each scene in the film is described in one sentence.

Instead of forcing oneself to write every day, Maynard suggests "collecting your thoughts every day, and then sitting down once or twice a week to write." He also highlights the importance of visual storytelling, noting that films are "visual communication documents." He has his students watch movies with the sound off and subsequently try to describe the story based on what was before them visually.

Maynard offers Digital Press Kits (DPK) to his students as a promotional tool for themselves and their writing. "Selling is a totally different and confused process" from that of promotion, says Maynard, adding that "writing a good screenplay has nothing to do with actually selling it." The general rule is "you write 14 screenplays before you sell one," but he concedes that it is possible to sell your first screenplay, "you’ll just write 28 more before you sell your second." Using a DPK to highlight your writing is a good way to develop personal relationships with people who can help you succeed in the industry.

A number of Maynard’s former students have had a taste of such success. A few are getting attention from major Hollywood studios, one student had her script produced by German television, two were finalists for the Sundance Screenwriters’ Lab, and Maynard is currently producing a screenplay for a former student who raised the budget independently. "Making screenwriters, one student at a time" is Maynard’s motto, and it seems to be working.