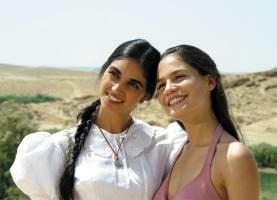 Share
Unlikely romances develop in the Israeli desert in the excellent 'Turn Left at the End of the World,' which screens this month as part of the Boston Jewish Film Festival.

Commencing just after the Six-Day War and amidst the turbulent climate of social change and post-colonialism in the ’60s, "Turn Left at the End of the World" chronicles the relations between two communities — Indian and Moroccan Jews — in a remote Israeli desert town through the eyes of two girls coming of age. Nicole (Netta Garti) is a mouthy, flirty, but also naïve Moroccan teenager, and Sarah (Liraz Charhi) is thoughtful, intelligent, if quieter and more removed, whose family has just moved in next door.

The family’s arrival is met with hostility and disappointment: far from Tel Aviv and non-western in descent, divide and conquer politics ruled. The Moroccans looked down upon the Indians for their darker skin, and were put off by their reserve. The Indians viewed the Moroccans in an equally unflattering way, commenting on their boisterousness. Their prejudices were tit for tat and both communities were oppressed, toiling in a hot and dangerous glass factory. Even their common exploitation did little to bring them together as the Indians regarded themselves as British, the Moroccans as French, and both as superior.

All illusions eventually crumble — although the road to liberation and tolerance is a bumpy one. In Bombay, Sarah’s father was told that in Israel he will find many opportunities and a better life for his family. It is clear that at some point, Nicole’s family came to Israel for the same reason. However the factory is the only work permitted to Indians and Moroccans, and the conditions are brutal and treacherous, the pay, abysmally low. Tensions flair when Moroccan workers call for a strike, physically bringing production to a halt, but the Indians opt to stay out of it. Nicole’s father is one of the strike’s main organizers and describes their action in the terms of the French Revolution. Ultimately, the Moroccans prevail, but no negotiations follow and the whole town is out of work and destitute.

Comic and unlikely relationships develop as the months of joblessness roll by. Tragedy descends upon both communities, but also joy. The Moroccans busy themselves with football, and the Indians follow suit, informally playing cricket in their free time. The game catches on despite the initial skepticism about playing it in the desert, and the British take notice and send their team out for a friendly match.

Ironically, opposition seems to be the coherent thread that ties people together throughout the film. While animosity between the British and the Indians may be expected, there is none, and the Moroccans are so excited by the prospect of a visit from any Europeans (if not the French singers constantly heard in the background), they all turn out for the match. Though the Indians had a chilly regard for the Moroccans, and were against the strike, that they were all compelled to walk out resulted in the reopening of the factory, higher wages and better conditions in the end. Superstition and xenophobia guide suspicions and misperceptions on both sides, and the film comments on the sometimes illogical targets of prejudice and mistrust.

There is no shortage of thought-provoking dialogue in the film, and as it is positioned at such a critical moment in history, there are many issues to be addressed and every one of them is handled with charm, humor and sophistication. The film is hilarious and devastating, bleak and beautiful: the narrative flows between emotional family sagas and comic community events effortlessly.

‘Turn Left at the End of the World’ will be screening on March 15 at 7PM pm at Coolidge Corner Theatre, as part of the Boston Jewish Film Festival. For more information, visit www.bjff.org or www.coolidge.org.

Tickets are $15, $12 for students, seniors, BJFF and Coolidge members.

'Turn Left at the End of the World' will be screening on March 15 at 7PM pm at Coolidge Corner Theatre, as part of the Boston Jewish Film Festival. For more information, visit www.bjff.org or www.coolidge.org. Tickets are $15, $12 for students, seniors, BJFF and Coolidge members.