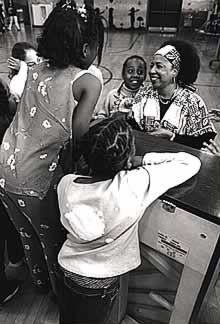 Music to Their Ears

Share
Massachusetts filmmaker Julie Akeret’s documentary 'Someone Sang to Me' about musician and educator Jane Sapp shows the profound influence one person, lots of music and plenty of patience can have on a group of schoolchildren. The film screens this month as part of Women in Film and Video/New England's 'Chicks Make Flicks.'

With public education the subject of concern across the nation, and the controversy between the U. S. Department of Education and PBS still resonating in public debate, Julie Akeret’s 2003 documentary "Someone Sang to Me," remains timely and inspiring in its profile of educator and musician Jane Sapp. She has stepped into the Springfield, MA public school system, where budget cuts have eliminated art and music programs, to offer choral instruction to middle school and high school students. Along with the melodies and harmonies come lessons in self-confidence, respect and teamwork. The film reminds viewers of the terrible toll that budget cuts take on the lives of public school children, the power of individual action and the saving grace of art.

Five years ago, Akeret was working on a film project she called "The Activists," which she planned as three 20-minute segments highlighting the work of three different people who were working for social change. She had already shot a segment about a man who fights for animal rights and she was looking for a female activist when she heard about Jane Sapp. Sapp leads music programs for students who have no other access to music education.

"I went to one of her rehearsals and I knew right away that I couldn’t fit her in to 20 minutes," the filmmaker says. "I told her what I wanted to do and she was very interested. She gave me so much of her time. She allowed me to go to all of her rehearsals and performances. I went to her home and interviewed her family."

The schools also "opened their doors" to Akeret and her crew. In the film, several students are interviewed who credit Sapp and their participation in the chorus with turning their lives around. Many of the students involved have difficult home lives and have always felt alienated by school. Sapp encourages them to write about their experiences and she puts their words to music. Akeret says that Sapp respects her student’s experience and knowledge; she doesn’t presume to teach them, but rather she wants to hear what they know.

"She had a tough crowd with the high schoolers," Akeret says. "But she takes them all over, and to see their stories performed is very empowering for them." The experience affected the filmmaker as well. "With her talent, experience and education, [Sapp] could have done anything, but she’s chosen to work with these kids. Seeing that kind of hope in the world was very inspiring to me." Audiences also have responded enthusiastically to the film’s inspiring message, and word-of-mouth has made it one of Akeret’s most requested titles.

"Someone Sang to Me" took four years to complete. During that time, Akeret was working on other projects as well and pursuing funding. "The budget was about $55,000," she states. "My salary was about $12,000, which was over the course of four years." Akeret feels this figure is "pretty low for a one-hour documentary. I think PBS budgets its one-hour docs starting at around 100,000." She is honest about fundraising: "It’s the least interesting part. I have to do lots of fundraising to start filming," she says. "I try to get small grants to get started."

Akeret says that the fundraising picture has gotten brighter for her since she joined the Fund for Woman Artists located in Florence, MA and headed by Martha Richards. "They help women artists get grants and they act as a fiscal sponsor," explains Akeret. "Before, I got lots of small grants, in the five to seven thousand dollar range, but they’ve helped me get grants from humanities foundations, which are much bigger." Akeret says that the Fund’s staff takes her proposals and "runs them through PhD writers who know the proper language that big funders look for. If you’re aware of those [words and phrases], your chances of getting the grants are much better."

"Camille Cosby came to me through a member of my crew who knows her and knows that she is interested in issues of education," says Akeret. "I wrote up a one page proposal that my crew member passed along [to Cosby] and one month later I got a check." Similarly Demme is "a friend of a friend of a friend." Akeret sent a short proposal with a letter referencing the friend they had in common. "He sent me a nice letter and money for production."

Akeret has been working in film and video for almost 20 years. After graduating from Columbia University with a psychology degree she thought about going into social work, but as she says, "all my friends were going into film and video." Her job as a mother’s helper to David Grubin, an Emmy winning producer and filmmaker, led her to one of his colleagues who was looking for someone to record and edit sounds for a sound effects library. One job led to another and she put in her time as a P.A., sound editor, and cameraperson. Unlike her friends in film school it was a long time before she got to hold a camera and "years before I got to direct my own piece."

Akeret cites video artist and independent TV producer Skip Blumberg as a professional influence and mentor. "It was the first job where I could do a little of everything," she says. "Skip did his own fundraising and shooting — no tripods or lights. It was very immediate. He’s a smart, creative and likeable man."

Like her mentor, she used to do her own shooting. "I had a Sony M3, which was broadcast quality at the time." As the technology improved, broadcast quality equipment became too expensive for her to buy. "What I realized was that renting equipment was almost as much as hiring a videographer with his or her own equipment for 500 to 600 dollars per day." Akeret said she has worked with videographer Alan Dater for many years and has enjoyed being able to concentrate on the other aspects of production. "Now though, with the high quality digital video on the market, I’m looking into buying equipment again."

Akeret feels that the high quality, portable equipment would be particularly useful for her current project documenting the re-settlement of Somali Bantu women in Springfield. "I feel like re-developing my skill as a cameraperson so I can be less obtrusive and more flexible," she says. She is fundraising for the project now.

Akeret is sure that she will not take over too much of the post-production chores, even with access to moderately priced editing systems. She acknowledges that she is tempted to get Final Cut Pro to do rough cuts, but that’s as far as her interest goes. "People who work as editors are really good," she says. "I don’t want to take the time to develop those skills."

Akeret uses three different distributors for her films, but handles the television distribution herself. Although her work and PBS would seem to be a natural pair, Akeret says she has had "discouraging interactions" with the institution. For instance, she was "astounded" by the feedback she received about "Someone Sang to Me." "They liked it, thought it was very inspiring, but thought it was ‘a local issue’. The inadequacy of the public school system is a local issue?" she asks incredulously.

Boston area audiences can view the film and decide for themselves at the March 8th screening, which will be held on the campus of MIT. Akeret will attend and answer questions from the audience following the film.

"The power of art and how arts impact the world are themes in my work," Akeret says. She sums up her philosophy with a quote from the playwright Bertolt Brecht, "Art is not a mirror held up to reality, but a hammer with which to shape it."