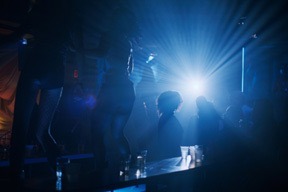 Spin on His Latest

Share
Robert Patton-Spruill and the FilmShack are breaking new ground with a new feature, a first-time documentary, and a new roof for Boston’s only 'New Wave in the ghetto' auteur.

Spruill is in the final stages of editing his latest project, a feature called "Turntable" about a DJ with a heart of gold whose family is full of criminals. Like "Squeeze," "Turntable" was shot largely in Roxbury and Boston with a crew of Spruill’s buddies. It also features local actors Russell G. Jones, Beresford Bennett, and Tyrone Burton, the brilliant lead from "Squeeze," now a man grown out of all but his boyish charm, not unlike Spruill himself.

Though nearly complete, few people have seen "Turntable." Spruill doesn’t believe in rough cuts, figuring that the audience assumes you’re putting your best foot forward. Since he admits he’s a "shitty audience" — everyone’s born a critic, he says — he does everything he can so the audience won’t "eat" him. And for this project it means taking his time, and tinkering till everything, especially the music, is just so.

What we know so far is that Spruill shot "Turntable" in about 27 days on a tight budget. In the opening scenes, the DJ’s brothers take part in a drug-deal gone wrong, and the serious and sincere DJ invites his villainous boss’s ex to the local diner for an innocent cup of coffee. Innocence is fragile in Spruill’s darkly rendered world, and the inherent hope that the DJ can keep his nose to the turntable propels the narrative forward.

"I’d rather rule in hell than serve in heaven," Spruill says. Not that Boston is hell, per se, but it is the place where he can produce, direct, write, and go home to his own bed every night. Spruill likes making films this way, having tried LA and deliberately chosen to return to his hometown, and the guys he grew up with, to set up the "Mom and Pop" production company he calls FilmShack. Co-founded with his wife, Patti Moreno, FilmShack has everything he and other independent filmmakers need under one roof — except a means for distribution.

Though other filmmakers may assume that Spruill’s track record would ease if not guarantee solid distribution for "Turntable," ("Squeeze" broke indie records for cutting an overnight deal with Miramax which led to a multi-million dollar project, "Body Count," for Showtime) Spruill begs to differ. "On the surface, I’m an insider, I’ve been doing this 10 years. But I’m sort of an outsider too." He knows that enough time has passed and the market has changed. And if he ever had illusions about making big money, those are gone. Having the right artistic collaboration is far more valuable to him.

"Turntable" merges Spruill’s love of music and film and he hopes to find a distributor that knows how to do the same. But not just any distributor. "I want to make sure I get in bed with the right people," he says. Chris Blackwell’s Palm Pictures comes to mind and Spruill jokes, "I think about him every three days!" Now an older, wiser, filmmaker, Spruill believes that forging such a partnership is worth the wait.

Spruill was an early success, a rising star that at age 25 critics were comparing to Spike Lee, even Scorsese. And though he still feels young as a filmmaker, he acknowledges that he’s grown. "I’m learning to get my vision without killing people," he says. That includes himself, by no longer putting in 20-hour days. His perspective has changed. He’s got what he calls a stronger "what works" box and sees himself as less of an artist and more of a craftsmen. "It’s all about being prolific. And I’ve got 30, 40, 50 movies still in me."

In addition to "Turntable," he is working on a behind the scenes documentary about the fathers of rap, Public Enemy. The aging but relevant socially conscious rappers invited Spruill to bring his camera to England, to film them on tour. Spruill’s been making their videos since 1998; the documentary is a natural collaboration. But a hint of shyness, a hint of "nobody-ness" revealed again, Spruill recalls his amazement at working so closely with a group he witnessed "changing the world" in 1989. "I just had to pinch myself, you know," he says more than once. Now he’s got decades of their home movies on his Avid and is in the middle of piecing together what will be his first documentary.

Meanwhile, also under the FilmShack roof, Spruill’s wife and business partner Patti Moreno is overseeing FilmShack’s acquisition of the former Boston Film/Video Foundation (BF/VF). After talking with other festival coordinators, she moved the New England Film and Video Festival to Columbus Day weekend in October and is reshaping the festival to bring more independent work, both national and international, to Boston audiences. Of course the festival will still feature locals’ work. Moreno places a personal guarantee that all submissions will be watched in their entirety. "As a producer, I know what it takes to get these projects made," she says. "And that work needs to be respected."

Moreno also has news that FilmShack will soon have a new home. The five-year-old production company will literally be in her and Spruill’s backyard. In the most appropriate turn of events one can imagine, Moreno and Spruill purchased the late (and legendary) Henry Hampton’s Roxbury home, with plans to renovate the property’s 32-garage stalls into larger FilmShack offices. "We grew leaps and bounds — more than we thought," Moreno eagerly reports, swearing that Hampton’s home has "spiritual power."

They may have the space, the equipment, and a prophetic locale, but Spruill and Moreno make no qualms about what they’re up against. "There are 1,000 people out there trying to make movies. It’s a struggle. And if it isn’t a struggle, something’s wrong," puts out Spruill. But he thrives on challenge, even with limited resources. "All filmmakers have to realize that you’ve got to do. No one’s going to do for you," he says, hoping others, even himself at times, can take heed. He stays at it, motivated by his own nagging question: "If I don’t do these things, who will?" And right now, he’s got an audience, patiently waiting for the results.