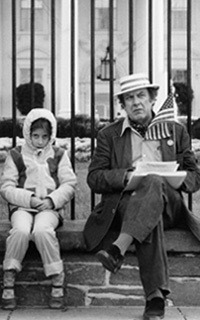 Share
A preview of the New England films and filmmakers getting screen time at Sundance, Slamdance and the festivals of Park City in January 2005.

If you’re making your way out to Park City this month, be sure to check out some of the local films (and filmmakers) being celebrated through the many festivals in the Beehive State (yes, Utah).

First up, Frederick Wiseman’s latest documentary "The Garden" premieres at Sundance, bringing honor once again to Massachusetts as a region for the non-narrative film.  Of course, it’s still about New York, but let’s not get too technical here.  Wiseman uncovers the odd Eden at Seventh Avenue and 33rd Street on Manhattan’s West Side — the third building to hold the title of Madison Square Garden, and a carnival of earthly and unearthly delights.  For more information, contact info@zipporah.com.

Also screening at Sundance is "Heights" directed by Harvard alum Chris Terrio.  His debut, produced by Ismail Merchant, transplants the trademark sophistication and elegant, character-driven sensibility of a Merchant/Ivory film to the Big Apple, chronicling a whirlwind day of chance encounters that profoundly alter the complicated lives of a worldly mother and daughter.  For more information, visit http://www.merchantivory.com/heights.html.

Emerson Alum Jenny Abel has the world premiere of her first feature documentary "Abel Raises Cain" at Slamdance Film Festival this month.  The film focuses on Abel’s father, Alan Abel, who has been touted as "the world’s greatest hoaxer" by some journalists for his pursuit of one seemingly absurd cause after another, whether it was a campaign to clothe all animals for the sake of decency or an organization to ban mothers from breast-feeding.   For more information, visit www.abelraisescain.com.

Also screening at Slamndance is "In a Nutshell: A Portrait of Elizabeth Tashjian," which documents the goings-on of the one and only Nut Museum in Old Lyme, Connecticut and its creator and curator, Elizabeth Yegsa Tashjian (a.k.a. The Nut Lady). For more information, visit www.mimeticmedia.com/projects.asp?project=nutshell.

Part of the gender-bending sketch comedy "Pretty Things," the serial "Mulberry Commons" directed by Michael Lucid screens at Slamdance to portray an array of brainy, distracted and cultish students at a New England boarding school who attempt to parse the intellectual banter of a real live “out” gay man. For more information, visit www.prettythingsss.com.

Brown University Alum and Writer/Director/Editor Leah Meyerhoff will screen her film "Twitch" this year at Slamdance.  The film portrays a teenage girl who has a conflicted and emotionally charged relationship with the disabled mother she cares for and develops an irrational fear that the disability is contagious. For more information, visit www.leahmeyerhoff.com/docs/twitchindex.html.

Well, that’s a sampling from the big two.  But don’t forget that there are many other fests to check out between ski runs — RoadDance (www.roadance.com), NoDance (www.nodance.com) and TromaDance (www.tromadance.com).