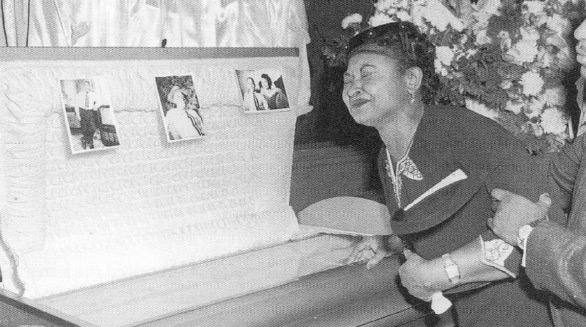 Share
Keith Beauchamp prompts a new investigation into the Emmet Till murder through his film 'The Untold Story of Emmett Louis Till.'

Reprinted from Association of Independent Video and Filmmakers

The truth about Emmett Till was supposed to be buried with him.

But a new documentary film has unearthed enough overwhelming evidence to prompt a new investigation into a murder case that was closed nearly 50 years ago.

In1955, Mamie Till Bradley put her only son on a train bound from Chicago to Mississippi so he could visit relatives. Having instructed him to mind his manners and corral his quick tongue, Mrs. Bradley made sure the boy kissed her good-bye before watching him scramble to make his train.

He was a fearless boy, Emmett Louis Till, a 14-year-old inner city kid who sparkled with an impish sense of humor. Such boldness, his mother feared, could get a young black boy into trouble in the heart of the Deep South.

It ended up putting him into an early grave.

While looking for something to do on a sticky day, Emmett and some cousins ambled into the tiny town of Money, Mississippi, which boasted little more than a general store run by Roy Bryant and his wife, Carolyn, a young white woman.

What exactly happened in the store is still unclear; there have been accounts that Emmett made a pass at Carolyn Bryant, whistling at her and calling her "baby" before his terrified companions pulled him out of the store and fled the inevitable consequences of disrespecting a white woman.

Three days later, Emmett was dragged from his bed at his uncle’s house by Roy Bryant and his half brother, J.W. Milam. His body was later found floating in the Tallahatchie River, tied to a seventy-five pound fan and brutalized beyond recognition.

Mississippi authorities wanted Mrs. Bradley to shield the world from the grotesque waxen features that dripped from her son’s bones, to allow no sunlight to pass through the hole in his skull, or reveal the eyeball that lolled upon his cheek. Instead, with no apologies, Emmett Till’s mother pried the lid from her son’s coffin to show the world exactly what hatred looked like.

A photograph of that ghastly image first caught filmmaker Keith Beauchamp’s attention; when he was a ten-year-old boy being raised in Baton Rouge, Louisiana. "It shocked me," says Beauchamp, now 33, who found the image in an old copy of Jet Magazine, "I was looking on one side [of the magazine] and here was this angelic face of Emmett Till, and on the other side was this disfigured face of Emmett Till. I couldn’t believe that someone that young could be killed for whistling at a white woman. But, I don’t think I really understood at the time what this picture was really about. I didn’t understand the depth of it."

Roy Bryant and J.W. Milam were tried for the murder of Emmett Till, and subsequently acquitted by an all white jury. The case has been considered closed ever since.

Since the age of 10, Keith Beauchamp has dedicated himself to serving justice for Emmett Till.

"I was blessed to have parents who instilled in me the education that they felt was needed for me to understand society," says Beauchamp, "The Emmett Till case is very deeply embedded in the African-American male psyche; it was something that was mentioned to me all the time, to teach me about the racism that still existed in America. I grew up in the Deep South. My parents wanted to keep me aware, to be careful, so they would often tell me, ‘don’t let what happened to Emmett Till happen to you’."

He came close to meeting a similar fate, however. In 1989, eight years after seeing Emmett’s body for the first time, Beauchamp attended a nightclub with some friends. He hadn’t been there long when he was accosted by a bouncer, then dragged outside by an unknown man who began throwing punches. Beauchamp fought back, though the situation proved even uglier when the stranger revealed himself to be an undercover police officer. Beauchamp was promptly arrested. His alleged crime? Dancing with a white girl.

After being dragged to the station, handcuffed to a chair, and kicked to the floor to endure more beatings, Beauchamp was finally asked for identification. He was released only when the detective on duty realized that Beauchamp was close friends with the son of a Major with the Sheriff’s Department.

"Living in the Deep South, where real racism exists, you feel like you’re invincible, and that’s how I felt. I was a kid, I was just having fun. Even though I was dating, and things of that nature, there was nothing serious for me. It was just having relationships and having a good time. A lot of things kept bringing Emmett Till up in my head, because I was so close to being Emmett Till himself."

Beauchamp spent a few years studying Criminal Justice at Southern University, but left school before graduation to pursue a career in entertainment in New York. His first job was writing music videos with a production company owned by some friends. But it wasn’t the right fit. He began to develop a feature film about the boy whose face had haunted him since his youth. Knowing he would need to gather some facts to beef up a screenplay, he casually launched into production of a documentary, meant to serve as a tool for garnering supplemental information.

Beauchamp ended up poured nine years of his life into researching, producing, and screening The Untold Story of Emmett Louis Till, a poignant documentary which both lovingly and fiercely recounts the life and death of a 14- year-old city kid who left from Chicago as a kid on vacation and returned in a pine box, a martyr.

It is Keith Beauchamp’s first film. He began his research in a library, scanning microfilm to try and accumulate information about the case. What he discovered ended up launching his project in an entirely different direction. Archival articles revealed names of witnesses who had never been questioned by the authorities, and alluded to additional participants who helped beat Emmett to death. "All the evidence is in that microfilm," he chuckles, still incredulous nine years later, "They name names in the articles in the microfilm of the people that were involved with the murder that weren’t ever brought to court. It was very strange that you have all of this overwhelming evidence that was just there, and nobody ever took the time to go back and research all of that stuff."

Unable to find many books on the subject, and eager to piece together the night of the murder, Beauchamp headed for the Mississippi Delta in hopes of uncovering the truth. He tracked down the people he had read about who allegedly witnessed the crime, but found they were reluctant to speak out. Many were African-Americans from the Delta who had kept silent for decades, afraid of meeting a similar persecution if they revealed what they knew about the people who brutally murdered a 14-year-old boy.

It took some time, but eventually, Beauchamp was able to gain the trust of many witnesses, who agreed to tell their stories on camera. From them, he learned of more people with information, so he traveled all over the country to track them down and hear their story. Based on these accounts, Beauchamp was able to ascertain that at least ten people had been directly involved with the murder, some of whom are still alive and have never been arrested for even investigated. It confirmed what he already suspected; that the truth about Emmett Till has yet to be uncovered.

Beauchamp became determined to persuade the Department of Justice to reopen the murder case and launch a new investigation. He made it his mission to produce a solid documentary that presented concise evidence and gripping testimonials.

"The reopening of the Emmett Till case was something that I planned, something that I wanted to do. I was inspired by many films by black filmmakers, but, also by Steven Spielberg. I’ve always said I want to be the black Steven Spielberg. He makes sure you know the history of the Jews; he knows how to educate. And I really want to do the same thing. Spike Lee’s film "Four Little Girls", inspired me to do this as well, because I saw how that story helped contribute to the reopening of that case. I really wanted to have that same effect."

Early on in his pursuit for justice, Beauchamp became very close with Emmett’s mother, Mamie Till Mobley [formerly Bradley]. Mrs. Mobley had herself vowed to honor Emmett’s memory, doing everything in her power to educate the country about the repercussions of hatred. She had always hoped to persuade state authorities to reopen her son’s case, but could never provide concrete evidence that would compel such an investigation. Her alliance with Keith Beauchamp would prove to be a powerful force.

"Nothing ever in my life has had more impact than my relationship with Mrs. Mobley," Beauchamp remembers fondly. "She basically sculpted me into the person that I am. She was nurturing me into an activist without my even knowing. She always felt that I was the person that was going to get this case reopened. I always told her that I would do anything in my power to make sure that it was."

The two formed a tight, familial bond. They spoke several times a day, almost every day, for nearly eight years, making joint decisions about the film, developing a strategy for appealing to government authorities, anticipating the day that their unrelenting resolve would pay off. The untimely death of Mamie Till Mobley in early 2003 was a difficult hurdle for Beauchamp to get over. But he was able to persevere, in as much Mrs. Mobley’s memory now as Emmett’s, and eventually kept his promise. On May 10, 2004, The Untold Story of Emmett Louis Till became a tool for social justice, when it was announced that a new investigation would be launched into the murder.

Beauchamp hopes that his film will stretch beyond its current role as an instrument in an investigation and reach out to an international audience. He is eager to educate the public about the two sides of Emmett Louis Till; Emmett the person, and Emmett the spark that ignited the American Civil Rights Movement.

For more information about ‘The Untold Story of Emmett Louis Till,’ and the renewed investigation of the 1955 murder, visit Beauchamp’s website, www.emmetttillstory.com.

The film will screen at Clark University on February 23, 2005 at 5 pm in Worcester, MA and at Salem State College on February 28, 2005 at 11 am in Salem, MA. There are also several showings of the film in January 2005 across the country as part of Martin Luther King Day festivals and screenings.

For more information about 'The Untold Story of Emmett Louis Till,' and the renewed investigation of the 1955 murder, visit Beauchamp's website, www.emmetttillstory.com. The film will screen at Clark University on February 23, 2005 at 5 pm in Worcester, MA and at Salem State College on February 28, 2005 at 11 am in Salem, MA. There are also several showings of the film in January 2005 across the country as part of Martin Luther King Day festivals and screenings.