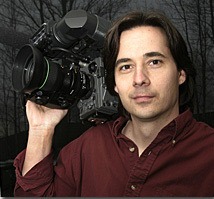 How to Be a… Camera Operator

Picture it: Slowly we approach a woman standing at the edge of a cliff. We see sweat dripping from her face. We look down at the 500 foot drop toward jagged rocks. We quietly move away and…

Who closed in on her face at just the right speed? Who captured the serration of the rocks at just the right angle? Who stepped back at that eerily calm pace to build suspense? The camera operator — that person behind-the-scenes but very much a part of the final project. If utilizing the skills above and several more is of interest to you, this may be the career for you. NewEnglandFilm.com consulted Tim Wessel, President of Vermont Digital Productions in Putney, Vermont, and a 20-year veteran of the film industry. From wedding videos in New Jersey to celluloid film work in California and New York City, Mr. Wessel has a few tips for anyone interested in becoming a camera operator.

School (The Positive and Negative)

Like most artistic careers, there is no one path to take and no magical school with just the right blend of creativity and theory. Wessel received his B.S. from Ithaca College in New York, but understands that’s not necessarily the key to success.

"If you are lucky enough to be able to afford film school, go for it. But if you are not in that position, don’t think you are doomed — most of today’s recognized directors and shooters did not go that route," Wessel says.

There are of course aspects of filmmaking that are easier to learn in a classroom setting, Wessel mentions film appreciation and technique among them. By the same token, even with schooling, the best way to test what you know is through real world experience. "To be a good camera person you either have it or you don’t," Wessel says. "And you don’t need an expensive school to find that out."

Shoot, Shoot, and Shoot (For Free)

"Jump on to a film production whenever possible," Wessel suggests. There isn’t a film production in the world that couldn’t use an extra pair of hands with a willingness to learn, especially, "independents that are dying for cheap labor," Wessel says. Getting experience will lead to impressing people with your knowledge later. In addition, Wessel comments, "I would always recommend making your own [movies], but maybe watching others make mistakes is time better spent earlier on in your career."

There are several kinds of cameras out there, and the more informed you are the better.

"The skills that you pick up with one camera will always transfer to another camera, even if operation differs somewhat," Wessel says. So basically, with every camera you learn to operate, you are not only adding onto your general knowledge but you are giving yourself a better point of reference for the next type you’ll work with.

Limiting yourself can also include the type of camera work you do. Wessel mentions that studio productions require a camera operator to be on a headset and to do little else as far as creative input or even camera movement. They also work mostly on tripods which Wessel calls "limiting" despite the necessity of them. Film sets offer a camera operator more direct work with the Director of Photography or producer while smaller films present the most direct input for camera operators who Wessel says, "can have great influence over the final shot choices and ‘look’ of the film."

Try to find films that also require more physicality of a camera operator, or as Wessel puts it, "find work that lets you put the camera on your shoulder, or on the ground or in a tree."

Know Everything (Don’t Limit Yourself… Again)

Wessel mentions lighting and sound, but says it is beneficial to know… everything. In particular, Wessel says, "I would highly recommend getting to know documentary-style shooting." And to prove there is no wrong path, he recalls that, "weddings taught me skills that are invaluable to me today, since you learn how to shoot things that are only going to happen once, and you’ve got to get it right."

He also mentions the challenges that a camera operator can face, such as trying to make a quickly formed shot look well-planned. Knowledge of one’s surroundings (lighting, sound, plot, set design and production concept to name a few) can never hurt. Study others who you find yourself admiring. Read film magazines, visit your local community television studio and lend a hand, because you never know who might have some great tips. Wessel recalls Patrick Ford of Sweetspot Productions in New Jersey, who taught him, "volumes on how to think creatively and make a boring event look interesting."

Qualities (How You Know if You ‘Have It’)

"Flexibility, creativity, and the ability to take direction and criticism," are the traits that come to Wessel’s mind for a good camera operator. They could be applied to any aspect of the film world, from production assistance to acting, because films are an intimate environment on many levels. With long hours, a lot to coordinate and often delicate stories being told, everyone needs to feel secure in their surroundings. It won’t take long to decide someone who did not work well with others shouldn’t be called for the next shoot.

This leads to the last bit of advice. If you have all of these qualities, how do you ensure the right people know about them and remember you next time?

"Get business cards from everyone you ever meet and/or work with, or make a point of writing down their names and numbers." Creating a film is a personal and difficult experience for many directors. Chances are, if a director or D.P. finds a camera operator he or she can collaborate with, there is no reason that same operator shouldn’t be called back the next time around. But it is up to the camera operator to meet people half-way and keep in touch.

"It’s all about word of mouth, really," Wessel explains. "So if you are good and are easy to work with (and those two should be reversed for order of importance) the word will get around soon enough."